Much thanks to my friend Billy for inviting me to use an extra ticket he had to the Memphis Tigers game yesterday.  It was easily the best seat I’ve ever had at the FedExForum… it read, “section CB2,” and I had no idea where that was.  I asked and was told to go to the club level.  Nice!  Then I discovered my seat wasn’t even a regular seat, but a seat at a desk, with an executive chair on rollers to sit in, and a waitress to serve food and drinks.  Here’s a look to the right of where I was sitting, at the other club box seats: 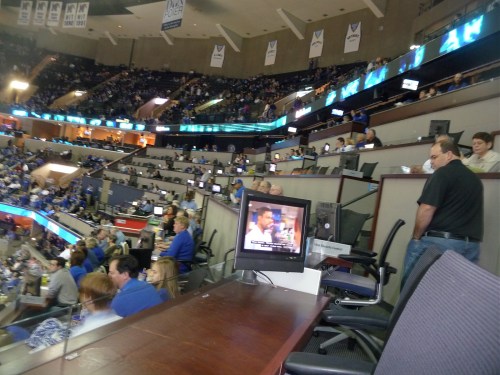 I remember touring the Forum prior to its first event, and I assumed those seats were where the press would sit.  Guess I was wrong.  There were even monitors at the end of each desk (you can see one in the pic above), with cable TV.  Here’s a look at the view of the floor from my seat: 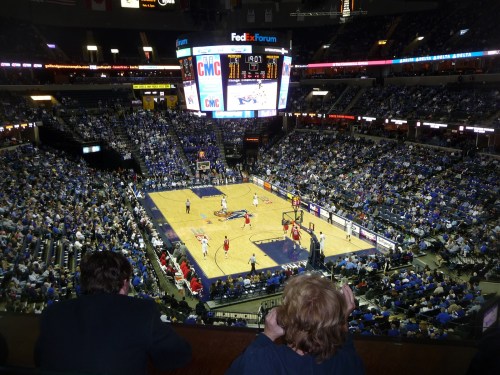 Face value of the ticket was $44, and I thought to myself, that’s a bargain for the quality of experience I had sitting in that seat.  I knew quite a few people sitting in the club level too – I hadn’t realized it, but the games are social events for a lot of Downtowners.

As for the Tigers, they went on a 15-0 run to open the game, struggled a little just before and just after halftime, with Houston actually taking the lead 44-43 at one point.  Coach Cal was livid and I could hear him yelling from a basketball court’s length away.  Eventually the Tigers got it together and won 83-68.  Doneal Mack had a great game and seemed to be able to hit threes at will.  Robert Dozier had a strong game inside.

Skipping brunch today, because I need to get some things done before my out-of-town trip tomorrow morning.  Heading over to a friend’s condo at 3 for our annual Super Bowl party.  I’ll take pics as usual, but it will be at least Wednesday before I get a photo album online, due to the trip.