Due to transportation issues I’m still in town.  The car wasn’t ready to go until 5:05 yesterday, and by then my mother was out of surgery and recovering well and I’d already talked to her on the phone.  I revised my plan to go out of town Sunday.  I was going to come back for Halloween tonight anyway and then leave again, so this way I’m making one trip rather than two.

Since I ended up in town Friday night after all, I walked down Main Street to Radio Center Flats, where my friends Lauren and Jesse had a Halloween party.  Here are a few pics. 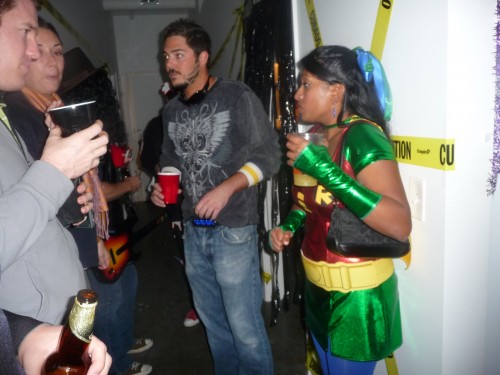 Okay, I hate to start this out on a bad note but I have to.  The guy in the middle of the pic above was just a complete and total douchebag.  I mean, look at him.  Spiked gelled hair, ridiculous beard, stupid-ass shirt, and an LED belt buckle that read, “WANNA RIDE?”  This guy made me wish I’d just skipped the party and gone to Calhoun’s instead. 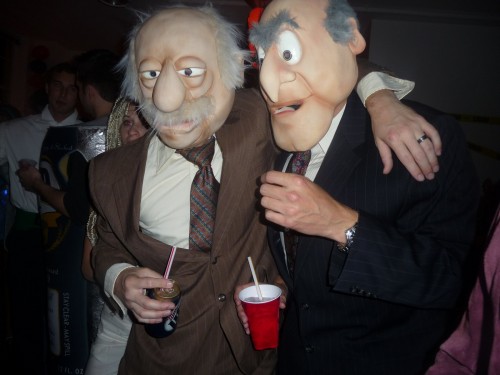 Statler and Waldorf.  You can’t have a Halloween party without a couple of dirty old men showing up and gawking at all the hot girls in skimpy costumes. 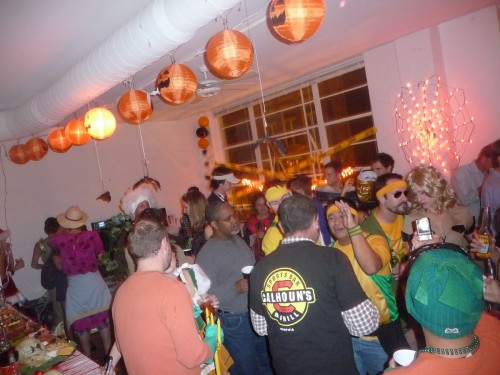 Crowd shot of the party 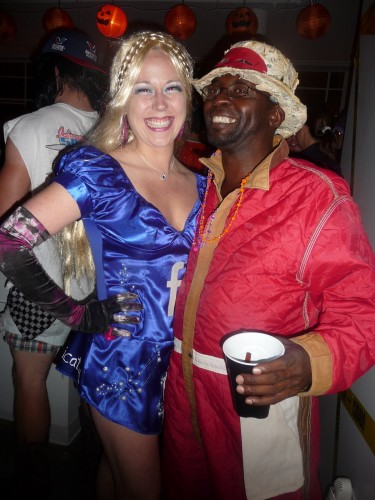 The Facebook Fairy and the… uh… oh there are so many jokes to be made here that it’s impossible to pick just one. 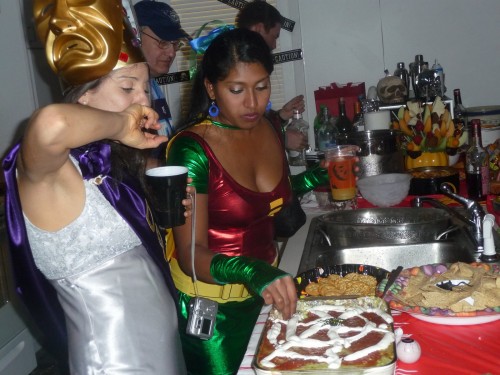 The Nuh-Uh Girl never strayed far from the food buffet.  Here’s a pic of her and Esther pigging out. 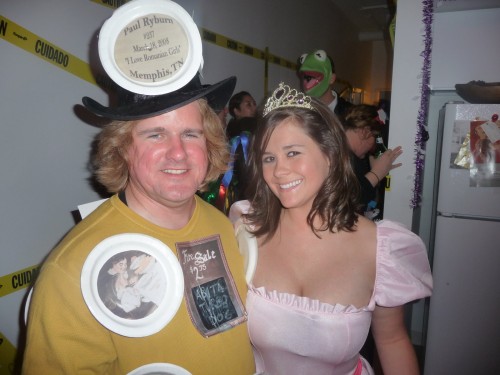 Me with hostess Lauren, and a cameo appearance by Kermit the Frog. 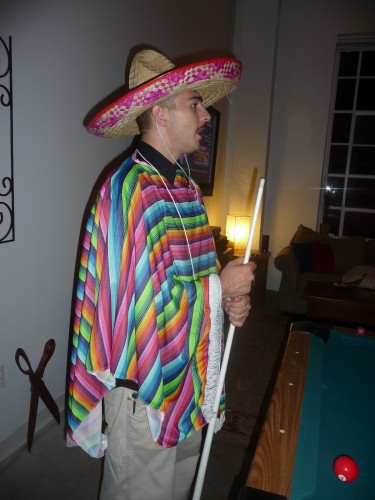 I wasn’t the only one who dressed up as a Downtown business.  Here’s the Happy Mexican. 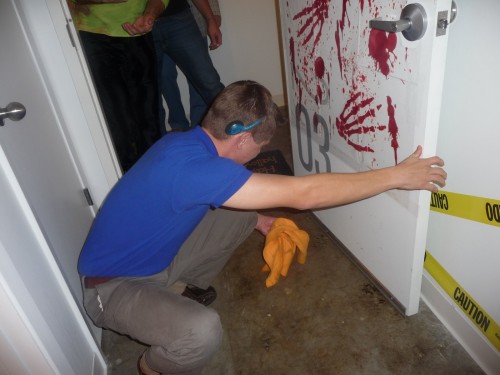 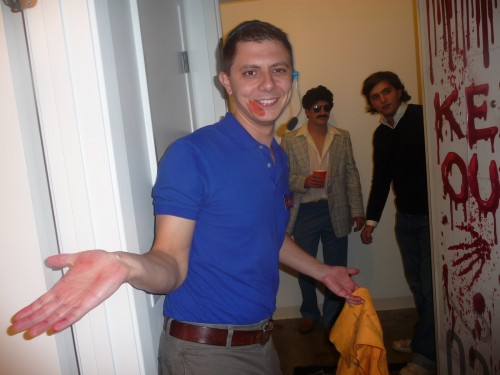 Someone spilled a beer by the front door.  Good thing we had the ShamWow guy there to clean it up. 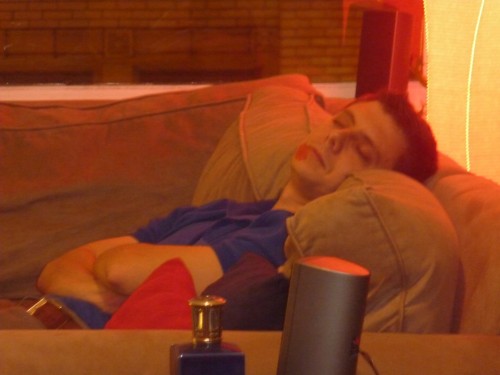 Later in the evening, the ShamWow guy was exhausted from all that selling and cleaning and beating his girlfriend.

Lauren and Jesse:  THANK YOU for an awesome Halloween party.  It was just what I needed to take my mind off the situation in Little Rock and yesterday’s car problems.  Food was delicious, decorations were spooky… you truly went all out to create a great party.

Lauren and Jesse had a mystery beer tub.  In past years I’ve had great luck with the Saucer’s mystery beer tub on Halloween, pulling out one $10 beer after another.  Not the case last night.  I got a Miller Lite, another Miller Lite, and then a Smirnoff Ice grape.  After that I gave up and went to the PBR keg, which is what I should have done in the first place.  It’s hard to do much better than PBR.

Now it’s time to plan for tonight.  Nearly every bar Downtown is having a Halloween party.  Of course, the Saucer will be a sure stop on my route, and the Silly Goose too.  Then I’ll have a decision to make.  There’s a private party in South Main which will probably be the best of all the Halloween parties… but it’s almost a mile walk home and the same people I partied with last night.  Meanwhile, a block from my front door there’s this: 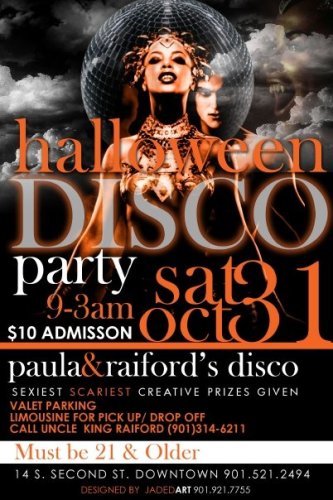 Dunno… I’m about 50/50 on remaining in the core vs. heading south.  I’ll see which way the wind blows tonight.

If you have kids, don’t forget that you can take them trick-or-treating to Bardog Tavern tonight.  They’ll be handing out candy outside the bar.  Better yet, leave the damn kids at home and go to Bardog and drink you some PBR.

The cops are going to be out in force tonight looking to pull people over for DUIs.  Be sure to have a designated driver or take a cab home.  One tidbit of inside info:  If the traffic light at Main and Union is flashing red, be sure to come to a FULL STOP, because there is almost certainly a cop with his headlights off laying in wait about a quarter block up Main.  Linden and Walnut is another intersection where they love to do this, for those of you coming from Midtown.

All right, time to hit Publish.  Since I didn’t expect to be in town this afternoon, I have nothing to do, and I already know the Fire Sale is crap (Shiner Bock) so I’m not heading to the bar.  Guess I’ll fire up PokerStars and see if I can make a little money to pay for my bar tabs tonight.