Saturday morning was “load-in” for the teams participating in BBQ Fest.  Teams drive materials into Tom Lee Park, unload them, and begin the process of building their tents and booths.  My team the Ques Brothers was there at 9 AM.

I have somewhat of a unique role on the team.  While all the other team members are frolicking and gallivanting in the park, I am the one who is asked to remain at the Flying Saucer and hold down the fort on load-in Saturday, taking care of anything that comes up.  It’s a thankless job but one I feel I have to do.  When you have a unique skill set, you must serve when called upon.  For me to refuse this role would be like Michael Jordan refusing to represent the U.S. on the 1992 Olympic basketball team.

The idea for my role comes from the U.S. government itself.  When the President delivers the State of the Union Address to Congress, all of his Cabinet members are there, except one.  One member stays in a different location, so in the event of an attack on the Capitol building, there is still someone left who can run the government.  By holding down the fort at the Saucer, I’m making sure the team can continue in the event something catastrophic happens to Tom Lee Park (it does seemed to be threatened by tornadoes a lot, you know).  So here’s a recap of my long day yesterday.

The very first thing I did was sync my calendar between my MacBook and iPhone, so I’d make an appointment at the Saucer to meet with trusted advisor John D.  John D is a veritable fountain of wisdom, and the opportunity to sit with him over a few beers and take in his pearls of knowledge is valuable beyond words.  John D is so highly respected in Downtown Memphis that he even has a breakfast named after him at the Majestic.  There’s no telling how much the BBQ team will benefit from that meeting over the next seven days.

Okay, here are a few pics that were taken of me while I worked. 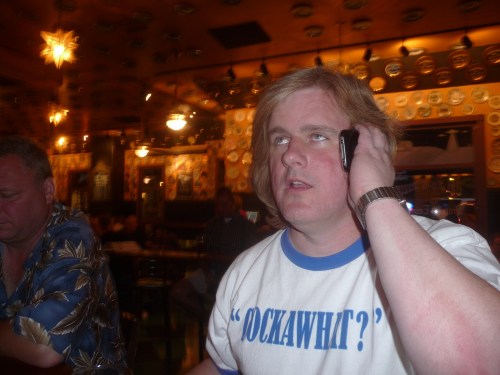 In the pic above, I’m hard at work on the phone, overseeing and coordinating many BBQ functions.  I appear to be looking up at a TV in this pic.  Most likely I was watching coverage of Friday’s stock market crash and recovery on MSNBC, so I could figure out its implications for the BBQ team.  It’s important to be proactive when these kinds of events occur.

Here’s another example of the kinds of things I had to do yesterday: 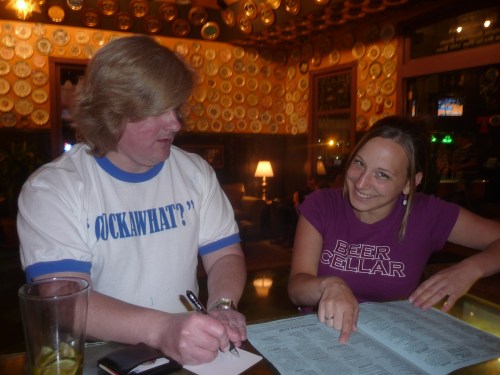 Here, I’m taking careful notes in a key meeting with a beverage consultant.  I cannot stress enough how important meetings like this are.  Based on the consultant’s carefully thought-out advice, I purchased 16 ounces of beer and 6 limes on behalf of the BBQ team.  Apparently some of the team members were quite thirsty, as I had to schedule eight additional meetings for similar purchases of beer.

Then we have this pic.  This was a case where I feel like I let the team down, but I’m posting it anyway to communicate what a tough role this is. 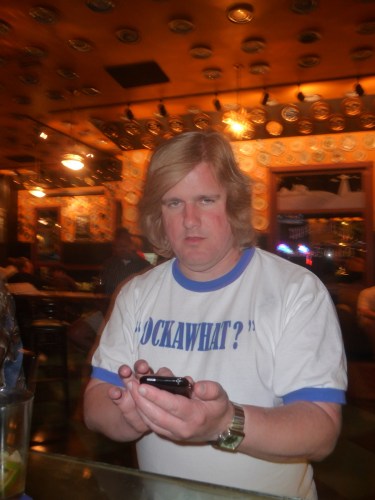 Can you just see the frustration in my face?  I was on my iPhone’s Safari web browser, investigating the team’s options in case we need to set up a WebEx remote conference with a sponsor.  However, the limitations of the small screen made it almost impossible to carry out this task.  I should have brought the netbook, which has a larger screen and webcam.  Finally I gave up and opened the iPhone’s “Heads-Up Hold’em” poker app, which I played for the next hour.  I went 3-1 against computer opponents “Poker Pete” and “Luckbox Larry.”  Three big wins early on for the BBQ team.

Around 3:00 things seemed to be running pretty smoothly at the Saucer, so I decided to make a quick trip to the Tom Lee Park site, to see how the build was going.  I snapped about 35 pics, which will be in a future blog post.  Team captain Steve said he could use some help raising the tent, but I told him I had to get back.  “The place could be falling apart without me,” I explained.

So I hurried back to the Saucer, and found team member Danny there.  That is what I love about this team.  We totally have each other’s backs.  Danny must have heard that I had to leave for a few minutes, and he stepped in to keep things under control.  That is teamwork at its very finest.  Thanks so much Danny.

I was also pleased to see that new Patio Porker team Squeal Street had two members covering the Saucer.  Later I learned that they had people covering Calhoun’s as well.  It’s a delight to see a new team keeping things under control so well in only their first year.  I suspect Squeal Street is going to go far in the world of BBQ.

Next on the agenda was a meeting with Las Vegas-based consultant Matty O, who flew in especially for this event.  We went over the week’s agenda over some friendly games of pocket billiards.  We played five games and I won three.  Again, three more big wins for the BBQ team on the first day of load-in.  Yeah!!!

About 7 PM things started to taper off.  “Maybe I can finally shut down here and enjoy the rest of my evening,” I thought.  But then I saw a Hawaiian shirt coming through the door.  It was Squeal Street team captain Bicycle Bobby, who’d come to get advice based on my years of experience as a BBQ team member.  I shared all the pointers I could think of – for example, particular expletives our inspirational leader/father figure had used when our team didn’t make the top 10.  It’s important to give back and foster the growth of new teams.

With that taken care of, I had yet one more thing to do before I left.  I sought out bartender Brittney, to ask for an honest evaluation of my performance yesterday.  Brittney is pretty much a role model for me when it comes to work ethic this week.  She gave me an A for my efforts yesterday, which delighted me beyond belief.

Okay.  I hate to say anything bad about the team, but I’m going to go ahead and post one pic from the park yesterday. 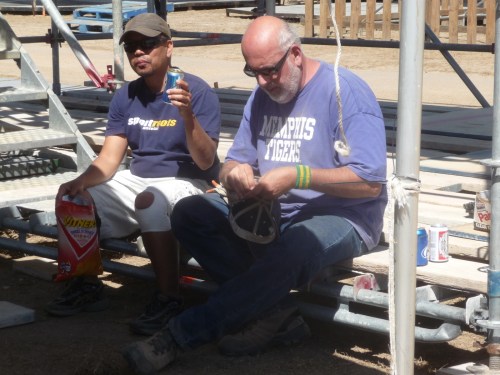 I gotta admit, this kind of burns my butt a little, to see team members sitting on their ass, eating snacks and drinking beer all day at the park, while I’m hard at work at the Saucer getting things done.  Therefore, I’ve made a decision.  I will hold down the Saucer for the team again today, but I’m not coming in until noon.  You heard me.  NOT UNTIL NOON.  I’m putting my foot down.  I worked my ass off yesterday and I deserve a little “me” time before I go in and do it all over again.  Maybe I’ll eat breakfast at Cockadoos this morning, then buy a Mountain Dew from the convenience store and take a nice walk around Downtown to gather strength for the long day that is sure to come.

Pics of the build will go up in the next post.  Check back.