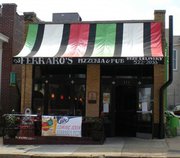 Ferraro’s Pizzeria and Pub, located at Jackson and Main in the Pinch, has announced that they are starting a new weekly trivia night next Tuesday, April 26. Trivia will begin at 8 PM and wrap up around 10.

Trivia will be hosted by Kevin Cerrito. Prizes for first, second and third, and a prize (which I hear is a pitcher of beer) for the best team name.

My trivia team, the Rapscallions, has played Tuesday trivia at the Flying Saucer since September 2005, but next Tuesday we’re going to take a break and try Ferraro’s. The Saucer adopted a new format recently, some of which doesn’t make much sense. (For example: A “beer question” where the first team to answer gets a beer. The team sitting nearest the trivia guy nearly always wins, and how does a team split ONE beer anyway?) We’re going to explore other options.

There’s a limit of 8 players per team at Ferraro’s, and since our team is often bigger than 8, we’ll have to decide how to handle that – split into two teams or something. Then again, I think we may actually see new team members, because unlike the Saucer, Ferraro’s is SMOKE FREE. We had people who wanted to play trivia with us, but the smoke bothered their eyes and stunk up their clothes. Not a problem at Ferraro’s. Also, since it’s smoke free, all ages can come and play.

(For people who insist on smoking, there’s a patio)

One person on Twitter compared it to the old Poplar Lounge trivia nights, but better. There will be beer specials, and they have PBR. I’ve eaten at Ferraro’s one time, and the calzone was excellent. Hoping I can talk a teammate or two into splitting a pizza on Tuesday, as I’ve heard nothing but good things about Ferraro’s pies.