Big, big weekend coming up in Downtown Memphis. Here’s an overview of the major events going on.

Thursday, April 14 is the Peabody rooftop party season opener. Ingram Hill will be the featured entertainment, along with Finger Eleven, the Beale Street Flippers, a drumline, hosts Maney, Drex and Riley, and DJ Mark Anderson. Doors open at 6 PM and the party goes on until 11. $15 cover charge includes your first drink; ladies and hotel guests free until 7. VIP passes that will get you in all season, and will get you access to a special VIP area on the rooftop, will be on sale at the door for $75.

Saturday, April 16 finds two big events on the calendar. First up is the Southern Hot Wing Festival, on South Main south of G.E. Patterson. This festival continues to grow, and we have 75 teams competing this year. Action kicks off at 10 AM and lasts until 6 PM. Insider tip: Get there by noon, when The Young Guns take the Jack Pirtle stage. When I first saw them set up three years ago, I thought, “Yeah it’s just a bunch of kids.” Then they blew into one of the best covers of Led Zeppelin’s “Rock and Roll” I’ve ever heard. These kids rock; do not miss them.

Also on the 16th, Memphis Brewfest happens at AutoZone Park. Three and a half hours, beginning at 4 PM, to spend walking around AutoZone Park’s courtyard sampling beers. Proceeds benefit Parent Project Muscular Dystrophy and the Memphis Redbirds Foundation. Huge beer list. (Disclosure: They comped me a ticket. It’s good to be a blogger sometimes.)

Sunday, April 17 is one of my very favorite festivals of the year: Rajun Cajun Crawfish Fest. It takes place along Wagner between Union and Beale. Beautiful river views, zydeco bands, contest and games including the always-entertaining “bobbing for crawfish.” Yikes, I see on their site that they’ve raised the price of a bucket of crawfish to $20 this year, and beer to $4! Better hit the ATM before you head down there. Time to give my yearly advice: Get there early. This festival is not known to run out of crawfish, but if you haven’t bought your bucket by 12:15 you’ll be standing in a line 50-100 deep. Luckily the people selling the crawfish know what they’re doing and move the line quickly.

Will the weather cooperate? According to the MemphisWeather.net forecast, the Peabody party should see good weather with highs near 80. Storms are expected but not til overnight. No rain Saturday and Sunday, but temperatures cooler than I’d like to see, with highs in the mid 60s. That’s a shame because Rajun Cajun in particular is normally one of the best fests of the year for tube top watching.

With all going on, I’m very happy with my decision to take next Monday off work. I will need the recovery day.

I hope to have Wine Race photos up tonight. Just need to weed out the pics in the “not fit for public viewing (but will be e-mailed to a few select friends)” category. 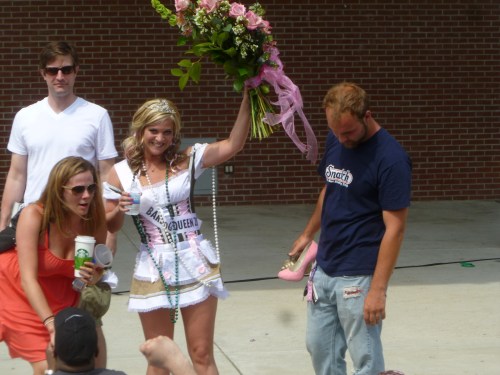 Congratulations also to Club 152, who won for best parade entry; the Downtown Mesquite Chop House, who won the grape stomp; and Huey’s, who won the wine relay.

I took 341 photos yesterday. I didn’t have time to go through them all and post before work, but I hope to have them online in the next day or two.

Longtime blog reader Uncle Ray just informed me that there’s $5 PBR at Redbirds games. For a ballpark that is an excellent price. The stand is right by the entrance.

The Grizzlies’ last regular-season game will be Wednesday night, a road game against the Los Angeles Clippers. The Grizzlies will host an official Watch Party at Bardog Tavern for the game, which tips off at 9:30 PM. The McDonald’s Claw Crew will be at Bardog with trivia and prizes. Come watch, as the outcome of that game will determine whether we get San Antonio, the Lakers, or Dallas in the first round of the playoffs.

Insider tip: If you like poker, get there two hours early (7:30) and head downstairs for Poker Jon’s weekly Texas Hold’em tournament. Real cards, real felt, progressive blinds, just like you see on TV, and it’s free to play. Game usually doesn’t last much longer than two hours, so you’ll finish in time to join the watch party.

More info on the watch party (and the one the night before at Hi-Tone) can be found here. 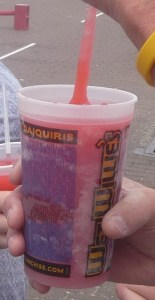 No event on the spring festival schedule screams “debauchery” like Beale Street Wine Race. Usually the last Sunday in April, the wine race was moved forward a couple of weeks this year so as not to conflict with the Easter holiday.

The fun starts around 1 PM at the intersection of Beale and Rufus Thomas. There will be a parade, the Queen of the Vine beauty pageant, a grape stomping contest, and wine relays. Many area bars and restaurants enter teams. Not sure who all is doing Queen of the Vine this year – the only contestant I know for sure is Amanda Panda from Bardog.

Pictured at left is the most popular drink at Wine Race, the Call-a-Cab from Wet Willie’s. Delicious but not recommended if you have to drive home, this drink consists of four ingredients: Ice, cherry Kool-Aid, strawberry Kool-Aid, and 190 PGA. Drink one of these, and you’ll be feeling really good, as it contains nearly as much alcohol as a six-pack of beer. Drink two and you’ll likely be the featured entertainment for the afternoon (as one of our group learned last year).

It’s free and open to the public, so come on down and participate in the debauchery. I’ll be down there about 12:30, after quick stops at the Majestic and the Saucer.

Congratulations to Downtown’s very own Nuh-Uh Girl, who ousted Carrie L. as Mayor of Club Shadows on Foursquare Saturday morning. Not surprised to see it. The Nuh-Uh Girl is a frequent weekend visitor to the dance club. Hanging out with a group of people who call themselves “The Wolfpack,” the Nuh-Uh Girl stops at Local, Silly Goose, and about a gazillion other bars on Friday and Saturday nights before ending up at Shadows. The group likes to finish up the night with post-dance food at either Blues City Cafe or Cockadoos, where I’m sure the Nuh-Uh Girl eats off everyone’s plates.

Although most of the people who hang out at Shadows are in their early twenties, the Nuh-Uh Girl is proof that the older generation can enjoy dance clubs at 4 in the morning too. She’s an inspiration to us all. Congratulations to her on the mayorship, and may she retain it a long, long time.

Congratulations to YOUR. MEMPHIS. GRRRRRRRRRRRIZZLIES!, who defeated Sacramento last night, clinching the final spot in the Western Conference playoffs. Read a recap of the game here.

Playoff tickets will go on sale at 10 AM tomorrow (here’s the link), which means Stephanie and the Nuh-Uh Girl will get on Twitter at approximately 10:01 AM and start begging for free tickets.

Go Grizzlies! People are hoping we just win one playoff game, which would be a franchise best. However, if we end up facing San Antonio, I really believe we have a chance to win the series and advance to the second round.

One more note, in case anyone from Grizzlies management is reading this: PLEASE RE-SIGN TONY ALLEN. Please. 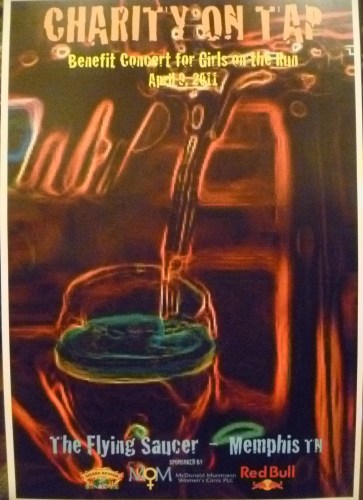 Fans of ’70s/’80s disco/funk band Dr. Zarr’s Amazing Funk Monster don’t have to wait until rooftop season to boogie down. The band will play the Flying Saucer tonight. It will be a benefit for Girls on the Run. Because it’s a benefit concert, cover will be slightly higher. According to the Saucer’s event calendar, instead of the usual $3, you’ll have to pay a hefty $4 cover to get in. Take an early withdrawal from your IRA if you have to. Get a second mortgage on the house. Sell your wedding ring… whatever you need to do, just get down there and catch Dr. Zarr! Show starts at 9:30.

I attended my first WordPress Meetup last night at Emerge Memphis. These meetups happen monthly, but up until this month I hadn’t been able to attend, due to really important stuff like playing poker and drinking beer. However, now having been, I’ll definitely make an effort to go back. Otto gave an excellent presentation on WordPress post formats, and then spent some time answering general audience questions.

I filled an entire page with notes I scribbled – plugins I want to investigate, a new theme I want to try, ways to play with CSS. Seriously, if you use WordPress, these meetups are well worth your time. I got lots of ideas for my own blog, and for the Intranet site at work built in WordPress (which, by the way, officially launches this afternoon).

On a side note, my blog may be down or may look weird for brief periods tomorrow, as I play around with themes and plugins. Given that it will be sunny and well into the 80s though, I don’t plan to spend too much time with WordPress.

Apologies to the other attendees for my sniffling and sneezing all the way through. Claritin-D isn’t getting the job done; going to switch to Allegra today. Also, apologies for not staying afterward and introducing myself; I got a last-minute request to trade consulting for free beer at the Saucer, and obviously I was not going to turn that down.

Consulting meeting went well, although it was rather unnerving to have a person sitting at the window staring at us the entire time. It’s really too bad there’s not a D-league for social skills.

The Grizzlies have announced that first-round playoff tickets will go on sale Sunday. More info here. If the Grizzlies win a remaining game or Houston loses one, we’re in. Opponent could be the Spurs, Lakers or Mavericks, depending on how 6th through 8th places fall in the Western Conference.

It’s ClimBRIDGES night tonight at BRIDGES, where you can climb their indoor rock wall. Kerry from the I Love Memphis Blog did it last summer and filed this report.

Another oyster dinner has been announced for Downtown. It will be at Sole on Thursday, April 21. Diners will get eight varieties of prepared oysters, each paired with wine. Call 901-334-5950 for reservations.

Here’s a link to a list of planned eletric charging stations for the city. Several are located Downtown.

The monthly South Main Association meeting will be next Tuesday, April 12, at Klein Fitness at the corner of Main and Vance. Free for members, $5 for non-members, with social at 6 and presentation at 6:30. Presentations by the owner of the gym and by the Memphis Farmers Market health education chair. $2 beer, $3 wine, free hors d’oeuvres. Free food? Wonder if the Nuh-Uh Girl will show up.

Speaking of whom, for those of you who know the Nuh-Uh Girl, here’s the perfect present to get her.

Downtown’s Visible School has announced it will change its name to Visible Music College in a complete rebranding effort.

How about this? Otto is one of the top contributors to revenue at Max’s Sports Bar. I know I’m right on that count. Anyway, if you’re into WordPress, I hope to get to meet you tonight. If you’re not into WordPress and you’re looking for something else to do, the Redbirds’ home opener is tonight at 7:05.