Every day Bardog Tavern has a “Dog of the Day,” an enormous gourmet hot dog. I went there for lunch and had today’s dog, and since it’s still fairly early in the day, I figured I’d post a pic. 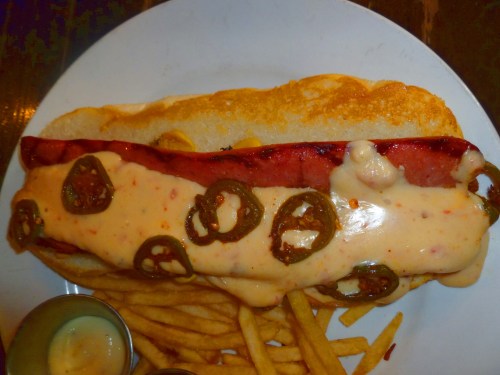 This is the “Tijuana Dog,” with white queso, red chiles and jalapeno peppers. It sounded good when I saw it on their chalkboard last night, and I hoped it would re-appear as the Dog of the Day today. When it did, I knew that would be lunch.

In honor of the Dog of the Day, I present the following list: The three nastiest cities I’ve ever visited:

3) Los Angeles. Visited in 1998. I was trying to book a hotel, and while searching online I saw an Econo Lodge at Melrose and Vine. “I’ve heard of both of those streets, it must be a good neighborhood,” I reasoned. Nope. Wrong. I walked out of the hotel and there were people of every ethnicity except American hanging around. I thought, it’s too bad I’ve never done any drugs, because I was pretty sure I could score a bag of anything I wanted within two blocks of the hotel. I walked all the way down Melrose to La Cienega Blvd. and back, about a 6 mile walk. Tons of shops full of rude people and overpriced crap. There was a store selling nothing but condoms which was rather interesting. I saw a Jack in the Box with the counter area totally encased in bulletproof glass. The Shoney’s had valet parking. I was scheduled to stay there three days but left after one. There may be nice parts of L.A. but I sure didn’t see them.

2) Tijuana. Went there with a co-worker and two of his friends in November 2000. We parked in San Ysidro, the southernmost neighborhood of San Diego, and walked across the border. There were third-story apartments with bars on the windows despite no apparent way to get to them. The party strip, Avenida de la Revolucion, exceeded Beale Street’s filth by a factor of 100. “You gentlemen get in free if the senorita with you dances,” offered one strip club owner. The club we went to had $10 all-you-can-drink and was full of undergrads from Arizona State who came down there to drink at 18. One of them grinded her ass all over me, and I told her from the way she danced, I could tell she was a virgin. I think I made her cry. On the way home we stopped at “The Real Taco Bell” which was selling pork adobada tacos 3 for $1. I suspect the pig I was eating may have been named Rover or Fido, but I was hungry so I went with it.

1) Spartanburg, South Carolina. My sincere regrets to anyone who has to visit this God-foresaken shithole. They like to say they’re located in the “upstate” of South Carolina, but “armpit of the world” is more accurate. I had the misfortune of teaching a class there when I was a corporate trainer in 1999. The class was actually the most interesting part of the day, because there was NOTHING to do after work. There were a few country buffets full of fried chicken and ribs and that was about it. I was there five days and did not see an attractive woman the entire time. For anyone who complains about Memphis, I recommend vacationing in Spartanburg. You’ll appreciate our fair city so much more. For those familiar with other mid-sized Southern cities, this place makes Pine Bluff, Arkansas look like Paris by comparison.

Yep. I’m back. Hope the four posts today make up for the four days without a post. I’m hanging out at the Second Street Branch Office and I have the netbook with me, so if I hear about anything interesting I’ll post again.