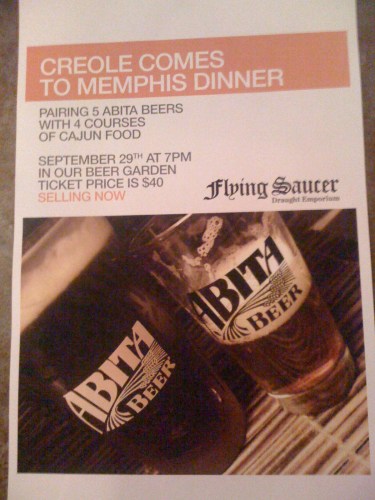 The Flying Saucer is planning their next beer dinner. It will be Thursday, September 29 and will feature beers from Abita. Although only four of their beers are commonly sold in Memphis bars (Purple Haze, Amber, Turbo Dog and Light), Abita brews many more. There are seven flagship beers, five seasonals, three harvest brews and three “big beers.” The beers haven’t been selected yet but the chef for the event showed me the menu last night:

These four courses will be paired with 5 beers. I’ve been to every beer dinner the Saucer has held since 2006, and without exception they have been outstanding. If you’re into beer, or if you’d like to learn more about pairing food with beer, I recommend that you go. They always have a beer expert, often from the featured brewery, on hand to discuss how to pair beer with food and to answer any questions.

Space is limited, so if you plan to attend, get down to the Saucer and buy your tickets now.

Madison Avenue, which has been closed between Main and Second since March 26 due to a collapsing building, has re-opened. Eastbound traffic and the trolley line are running. The avenue is still closed to westbound traffic. 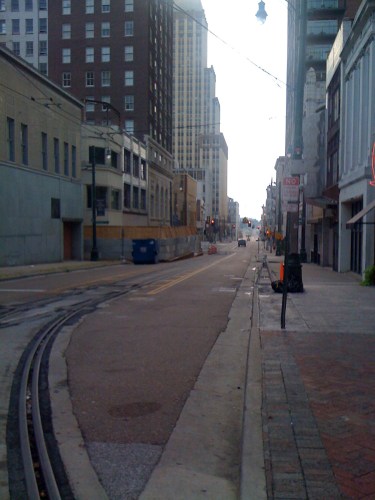 I had an interesting and enjoyable Thursday night yesterday. A good friend of mine in the wealth management business asked me to meet with him, to brainstorm on how to use social media to connect with people. He has some really outstanding ways for young professionals, especially those getting married or about to start a family, to increase their future wealth without impacting their lifestyle at all. He’s also very concerned about the fact that most people in the service industry don’t have health insurance. He’s seen too many fundraisers for bartenders and servers who got sick and couldn’t work, and is trying to pull together ways to insure them inexpensively. It was fascinating to hear about, and I hope I gave him some good ideas. Should I do a full post about him? I can if anyone is interested, although it will probably be next week before I get around to it (there’s beer to drink, after all).

He told me that his smoke breaks are rather lonely; he’s the only one in his 16-person office who smokes! Time to give up that habit buddy!

Next Friday, September 9, the Madison Hotel will begin a new wine tasting and reception in its lobby. Wines will be paired with food stations designed by Grill 83 executive chef Chris Windsor. Ambient jazz band Front Street will provide live music. Event is from 6 to 8 PM, costs $35 including tax and gratuity, and will be held every Friday during September (except tonight). Call 901-333-1224 to make reservations.

The Redbirds released their 2012 schedule this morning. They’ll play the first game of their 13th season on Friday, April 13; clearly the Redbirds are not superstitious. They’ll have home games on Mother’s Day, Father’s Day, Memorial Day and July 4. If you’re one of the first 3000 fans to attend Sunday’s game, they’ll give you a free magnetic 2012 schedule.

The Memphis Business Journal published a list this week of the top revenue-generating teams in college football. I’m sure it will surprise no one that Texas as at the top of the list. My Arkansas Razorbacks come in at number 15. Tomorrow night it will be time to CALL THOSE HOGS! I have an invitation to watch the game on PPV, but will likely miss it because I will be at the Memphis Music and Heritage Festival.

Speaking of the festival, the schedule is now on the website. Wow. This looks like the best year ever. Cooking demo schedule is up too. This season’s Hell’s Kitchen contestant Jonathon Plumley is among the chefs who will be on stage.

The Flyer has broken the news about Chef Michael Patrick’s new restaurant. It’s going into the old Harry’s Detour space on G.E. Patterson. It will be called Rizzo’s Diner and the Chef is hoping for a mid-September opening.

Three day weekend coming up and I’m ready… just gotta get through the afternoon and then the fun begins. And by fun, I mean beer.

I just did the “where to watch college football Downtown” post. Scroll down to see it. Here are a few other news items…

Cooper-Young Beerfest tickets are now on sale. Get tickets here. They’re adding more brewers and capping it at 700 this year, in order to keep the lines fairly short and to give people time to talk to the brewers. The date is October 15 and the beerfest is expected to sell out, so get your ticket early. I bought mine this morning.

This Friday will be the Orpheum’s annual showing of Rocky Horror Picture Show. This is the finale in their summer movie series, and it always draws a big turnout. Movie starts at 8, but get there at 7 for a costume contest. Prop bags will be sold for $5, and movie-goers are encouraged to throw toilet paper and do all of the audience-participation moves. How often do you get to throw toilet paper in the Orpheum? $7 for adults, $5 for children 12 and under (movie is rated R). Bring your ticket to BB King’s afterward for free admission, or to Itta Bena for free appetizer with the purchase of an entree.

I’m always happy to post about cheap beer, and this Sunday you’ll find it at Kooky Canuck. They’ll have 12-ounce Super Cold Bud Lights for 99 cents all day in a pre-Labor Day celebration. If you’re around the corner at the Memphis Music & Heritage Fest, stop in Kooky for a couple of quick beers on Sunday (unfortunately you can’t get to-go cups for the festival).

While we’re on the subject of beer, the Flying Saucer’s fall menu just came out. Last night I looked it over and discovered a new beer flight, where you get to sample five 5 oz. servings of different beers. The new flight is called Hop Head and includes Yazoo Hop Project, Stone Pale Ale, Victory Hop Devil, Sierra Nevada Pale Ale, and Bridgeport IPA. Those are some yummy beers. Cost is $8.50.

Max’s Sports Bar, which opens at 4:30 PM most of the rest of the year, will open early during college football season. This is the only true sports bar Downtown, with 10 TVs plus a projection TV on the big deck out back. They get the all-access season packages, although as far as I know they’re not getting any of the pay-per-view games happening the first week. Very friendly locals and die-hard sports enthusiasts sitting at the bar, and Lauren behind the bar to take care of you all afternoon. Sound will be on for whichever is the biggest of the games currently playing (or whichever involves local/regional teams). $2.50 PBR. 9 more beers on draft, and more in bottles.

The only bar I’ve heard of that is running specials for college football is The Green Beetle. They’ll have buckets of domestic beers 5 for $10, Heineken 5 for $12.99, mix and match imports for $12.99, 4 PBR or Miller High Life for $8. They will have food specials as well, and these specials also run during NFL games. They will have the sound on. They have cable but not the all-access package.

This isn’t a Downtown venue, but I got an email saying the UT Alumni Association will be at the Racquet Club, showing Tennessee’s pay-per-view game Saturday with sound and a 73-inch TV.

For bars where fans of a particular team congregate, Local tends to be a UT bar (which is why I don’t go in there much during football and basketball season). Max’s Sports Bar welcomes fans of all team affiliations, but you’d be hard-pressed to ever go in there and not find an Arkansas fan or two.

Memphis vs. Mississippi State is tonight at 7. It’s on Fox Sports. That’s a regular cable channel, so you won’t have to find a bar will all-access. Most bars Downtown should have it on.

If I left out any bars that are having specials for college football, are showing PPVs, or are gathering places for a particular team, shoot me an email at paul@paulryburn.com and I’ll post.