I’m very excited about Wednesday morning, when I will attend the Social Media Expedition’s monthly breakfast. For the past couple of weeks, people have been talking about the soon-to-be-rolled-out Facebook Timelines. These will replace the current profiles, and will offer a much more vivid and thorough look at a person’s/business’s history since they joined Facebook. From what I understand, people/businesses can add photos and video taken prior to the date they joined Facebook, taking them all the way back to birth/incorporation if they choose.

I work for a company that has a rich history, and am excited about using Timelines to share that history with our Facebook fans, particularly since our 75th anniversary is coming up next year. Local social media expert Jessica Grammer will walk the breakfast attendees through the Timeline and the possibilities it offers to businesses. It should be an informative presentation, to say the least.

If you’re interested in attending the breakfast, details can be found here. Space is limited. The breakfast is Wednesday morning from 7:30 to 9:00 AM. Cost is $20. It is a casual event and you’re not required to stay the entire time.

Yesterday I had to be up bright and early, because the Razorbacks played at 11 AM. I showered, threw my clothes on, and headed out the door. As I walked down Main Street Mall, I noticed that Krispy Krunchy Chicken had its sign up: 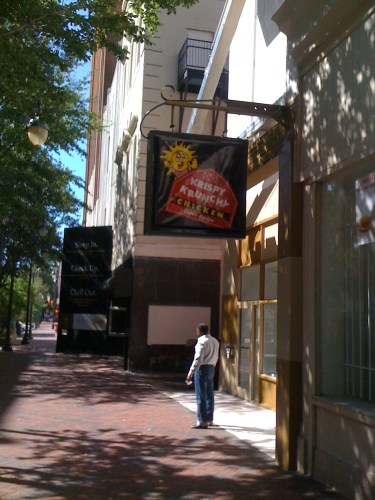 There’s a sign in the window saying it will be open Monday, October 10. Krispy Krunchy Chicken is at 51 S. Main, between Monroe and Union next to Family Dollar. Krispy Krunchy is a chain with more than 600 locations. You can learn more about them and view their menu on their website.

I had decided to watch the first half of the game at the Saucer, and the second half at Max’s Sports Bar. I grabbed my usual spot at the Saucer and watched the first quarter, which was not good for the Hogs. Texas A&M went up 14-0 and for a while I wondered if Larry Porter was coaching the Hogs.

While I was there, a man came in and handed the Saucer girls several menus. I recognized him as the guy who runs Second Street Shopper down the street. Curious, I went over and looked at one of the menus. It’s for a new restaurant called Zac’s Cafe. I snapped a pic of the menu (click to see it in a larger size): 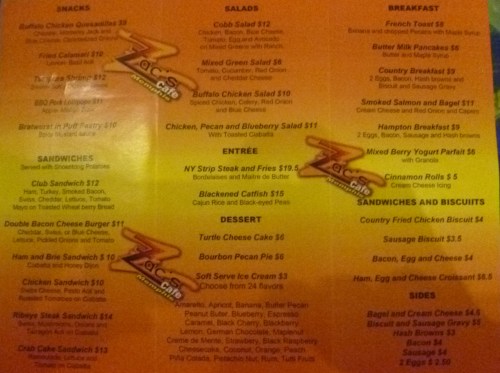 Zac’s Cafe is located at 175 Peabody Place, in the space inside the Hampton Inn that used to be occupied by Crepe Maker. They serve breakfast, lunch, and dinner, and have 24 flavors of soft-serve ice cream. They also have beer on tap and in bottles, including New Belgium, Ghost River, and Samuel Adams. Their hours are 6 AM-2 PM, 5 PM-11 PM Sunday-Thursday; 6 AM-2 PM, 5PM-til late Friday-Saturday.

The game continued, and the Hogs started to wake up but were behind 35-17 at the half. By halftime there were probably 40 people in the place, and more than half of them had on Arkansas attire! Not sure when the Saucer became a Razorback bar but I like it. I canceled my venue change to Max’s for the second half because I was clearly in good company.

The Hogs rallied back in the fourth quarter, making a two-point conversion to tie the game at 35. Our defense finally showed up, and we held the Aggies to a field goal on the next drive down the field. The Hogs then scored a touchdown for a huge come-from-behind win, 42-38. The crowd at the Saucer had grown even more, and called the Hogs no less than three times. What an exciting game!

Afterward I hung out on the patio of the Silly Goose with friends for a couple of hours, then went to the Majestic where I had one of my favorites, the chicken tortellini for dinner.

After that I went home to take a quick nap, planning to get back out to watch the Bama-Florida game, then stop by the Monkey for their first karaoke-free weekend. Didn’t happen. I woke up at 1:40 AM and, although the bars were still open, decided to call it a night. I’ve been needing to recharge my batteries for a while now, and the 12+ hours of sleep felt mighty good.

Congratulations to the Memphis Tigers on finding a way to squander a 17-0 lead and lose 38-31 to one of the worst teams in the Sun Belt conference, Middle Tennessee State. I saw some people say on Twitter that this is a moral victory for the Tigers, because we managed to cover the -24 spread. Statements like that just illustrate how pathetic the Memphis football team has become. The good news is, they may finally get rid of Larry Porter after this loss, but if they want to address the real problem, they need to

Great news for Downtown: The Greyhound bus station on Union is for sale. Across from AutoZone Park where the Redbirds play, that is absolutely prime real estate and I hope something grand is done with the space. The bus station has been a magnet attracting bums and vagrants to Downtown Memphis for years. The sooner it gets out of here, the better.

October is Memphis Means Music Month and there will be events all month long. Click here for a calendar of events.

The Brass Door was reviewed in the Commercial Appeal yesterday. I’ve never had their Irish breakfast, but it sounds massive, and it’s served all day! Bangers and rashers!

Closing weekend at Bar None continues this evening, with $3 beer, $4 cocktails, and $5 wine. I heard reports from several people who went there last night that it is a very good time. I also learned the identities of the new owners, although for now I’m going to keep it off the blog. Suffice to say that they are people who know how to run a good bar.

Don’t forget that this is the first weekend free of noise pollution at the Downtown Blue Monkey. No more karaoke nights! Well, I guess everyone in my extended group of friends won’t be getting texts today trying to convince them to come to karaoke. That’ll be different. I find it rather appropriate that karaoke will come to an end on the first day of Memphis Means Music – REAL music – Month.

Arkansas vs. Texas A&M on ESPN, people-watching outside Widespread Panic, and possibly the Irish festival in the Pinch are on my agenda for a long Saturday. It’s time to CALL THOSE HOGS!!!

Thursday night I attended the Abita beer dinner at the Flying Saucer featuring Cajun and Creole food. I got a $5 discount on the price of the dinner for being a member of their UFO Club. They shut down the Garden for two hours and laid white tablecloths. I took a seat next to my friends Eddie and Jake, and found an Abita beer guide describing each of Abita’s beers in-depth. 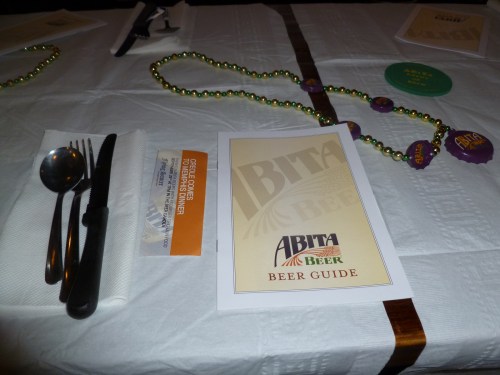 General manager Kirk welcomed everyone, and then introduced regional beer rep Shawn, who was our host for the Abita dinner. 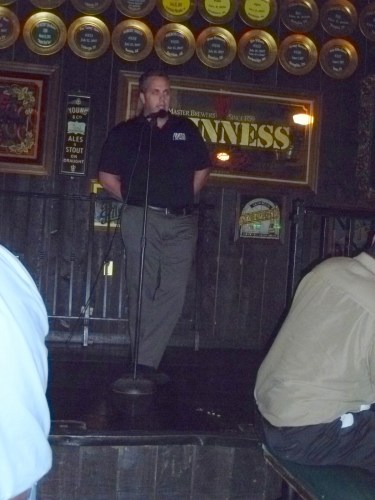 After a brief introduction, the servers started bringing out the first course. Prior to the dinner, Ciara had rounded up the regulars and said, “You have to sit at my table,” which was fine because it was the one with the window view.

I was happy to see Andygator, because it is one of my favorite beers. Last summer when I went on a business trip to New Orleans, Saucer server Lil’ Kim made a list of things I had to try, and Andygator was on there. It has since made its way to Memphis, and has become my second-most-consumed beer at the Saucer, after Dos Equis Lager. With 8.0% ABV for $4.50 a glass, it’s an excellent value.

Okay, they cheated a little. The gumbo came from their sister restaurant the Flying Fish down the street. I didn’t have a problem with it though; the Fish makes good gumbo.

The third course was my favorite by far. They gave us a generous portion of flank steak cooked medium rare, topped with a crawfish sauce. Creamy mashed potatoes were on the side. The steak was delicious and called for a beverage with some “oomph” to complement it. Jockamo IPA was a good call.

Beignets were surprisingly good (I had no idea the Saucer knew how to make them) and paired well with Purple Haze.

My only complaint about the root beer float is that it didn’t come in a 32 oz. Big Gulp cup. I wolfed down the float in record time.

If Turbo Dog had been planned as a part of the menu, you’d see a rant in this space. Many of the regulars consider Turbo Dog to be the worst of all of the Saucer’s 200 beers. It wasn’t supposed to be on the menu, though. Abita is brewing a specialty beer to celebrate its 25th anniversary, with vanilla beans and high alcohol content. It was supposed to be the closing beer for the dinner, but it wasn’t ready in time.

Overall, I’d give the beer dinner 4 stars out of 5. I had a very good time, enjoyed the food, and was glad I bought a ticket. However, I have to deduct a star for three reasons:

1) Other than opening remarks, the Abita rep really didn’t guide us through the dinner. He didn’t talk about each beer, how it is brewed and why it pairs well with the accompanying food.

2) Abita brews many beers (somewhere around 17 I think), the majority of which are not available locally. I wish some of the ones not commonly seen in Memphis had been brought up for the dinner. After all, Abita Springs is only a 5 1/2 hour drive… give us reasons to come visit!

3) I just can’t give five stars to a menu that includes Turbo Dog, planned or not.

Those minor criticisms aside, though, I still highly recommend you buy a ticket the next time the Saucer has a beer dinner. Beer is said to pair with food even better than wine does, and this and the previous dinners demonstrated that fact well.

In other Saucer news: They’re giving away a bike. 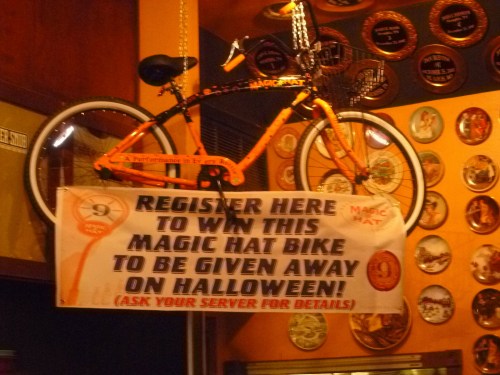 Drink Magic Hat products to enter to win this orange and black bike, to be given away Halloween night. Since Halloween is on a Monday, most of the parties will happen Saturday the 29th, and you can get to the Saucer to see if you won while drinking some Pint Nite beer.

I’ve got enough news items to do a “Saturday update” post, so check back in a while. I’ve got to get it done before the Hogs play at 11 though.