Amid all the photos of River City Brewers Fest that I posted yesterday, I completely forgot to mention the other festival I attended Saturday – Mudbugs in March! I had a box of crawfish there and they were superb. When I look like I just got done crying by the time I finish my crawfish, it’s a sign they had just the right amount of spice. Plus I got two pieces of corn on the cob, two taters, and two pieces of sausage in my box. A delicious late afternoon meal!

Downtown Memphis has a new museum! The Memphis Railroad and Trolley Museum is now open in Central Station. They’re open 9-5 Friday and Saturday, noon-5 Sunday, and other days by special arrangement. Admission is $3, under 12 $1, under 3 free. Although they’re already open, they’ll have their grand opening celebration on National Train Day, Saturday, May 12.

The Downtown Memphis Commission is seeking a firm to guide the branding of the South Main District. The district now has 2000 residents and continues to grow, and the DMC wants to present cohesive messaging, identity, and marketing. More info here.

By the way, the DMC posted something rather interesting this morning about my street, Main Street. The first grocery store opened on Main (Piggly Wiggly), the first five and dime opened on Main (Kress), and rock’n’roll was played on the radio for the first time ever on Main (in the studio at the Chisca Hotel).

It’s time for another beer dinner! 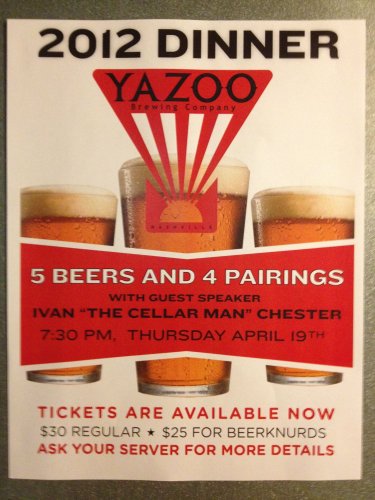 Cellar man Ivan Chester will be the guest speaker at a Yazoo beer dinner to be held at the Flying Saucer Thursday, April 19 at 7:30 PM. 5 beers, 4 courses. Menu has not been set yet, but I was talking with Saucer GM Kirk Saturday and he said he was thinking about spicy chicken over a waffle. That sounds like it would pair really well with beer! Tickets are $25 if you’re a UFO member, $30 if not. Ivan Chester did the dessert pairing last winter, and was really good about talking to everyone who attended and answering questions. You can follow him on Twitter at @yazoocellarman.

The Blind Bear has hosted a variety of live music in the four months they’ve been open, but what better to play a speakeasy than a speakeasy band? 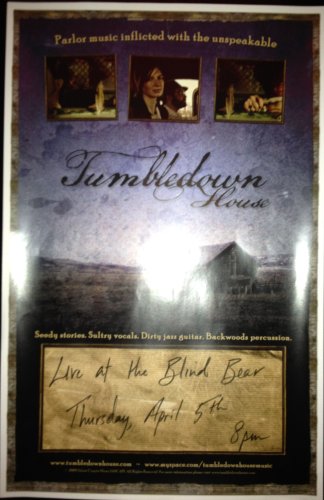 Tumbledown House will play the Bear Thursday at 8. They are a modern speakeasy band that is on tour, and they are stopping in to play a free show.

Attn Moody Ques teammates: It’s time to pay your dues! Treasurer Frank sent out an email about it this morning. After the 5th there will be a late fee, and if you pay after the 15th we can’t guarantee you a 3-day wrist tik or a team T-shirt. If there are still spots open on the 15th, people on the waiting list will be contacted.

That’s all I have time to post now. It’s a newsy Monday, so there will probably be a second post later today.