If you’ve read this blog for any length of time, you know that I’m partial to Eastern Europeans. Romanians in particular, but I’ve also mentioned Estonians, Latvians, Lithuanians, and Moldovans.

However, yesterday it was the Polish who stepped it up. One of my Facebook friends is on vacation in Florida, and posted a photo of herself. I asked for, and received, permission to re-post the pic here, to serve as an example to others. 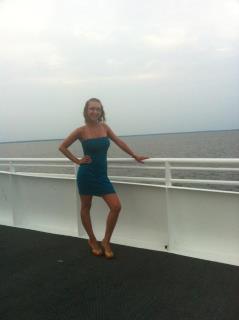 Three words. TUBE. TOP. DRESS. If you’re trying to pick out what to wear to BBQ Fest, let this serve as an example to you. This is how it’s done. God bless the Polish. That thing that happened in the 18th century where the Russians, Prussians, and Austrians carved up their country was total B.S.

It amazes me how come people don’t get it. Yesterday afternoon I texted a friend who had to go out of town for a few hours. “When you get back, put on a tube top and come hang out at the Blind Bear,” I told her. So I was at the Bear, but about 11 I decided to walk over to Huey’s for Paul’s Drunkass Food. Not 30 seconds after I ordered a Heinz 57 burger and fries, I got a text. “I’m at the Bear,” she said.

Seriously. SERIOUSLY??? You expect me to walk away from $10 of food when you’re not even going to dress appropriately? I know I’ve been ranting on this a lot lately, and it’s not even Tube Top Month yet and I apologize to my readers for having to endure it. But certain people just are not getting with the program and it’s irritating me to no end.

All right. It’s BBQ Fest. Let me explain what happens tonight. Thursday-Saturday the park is open to the public, but teams can buy tickets for the Wednesday “Friends & Family Night” private party. There’s a maximum of 50 tickets per team. Sounds like a lot, but when you have a team with 37 members and 4 sponsoring organizations, tickets can be scarce. It’s hard enough to get tickets for every team member, much less spouses and friends. We’ve always found a way to make it work though.

I have not yet seen our booth, but I hear that Holliday Flowers totally rocked it and it far exceeds the 2009 and 2010 booths they did for our old team. I will take lots of photos tonight. Our booth is almost all the way to the south, literally about 4 booths from the southernmost tip. We’re on the bluff side, not the river side, but our booth is so tall that it has a river view. Our friends at Squeal Street are about a 2 minute walk away.

This just in: I have a request from the captain of the Squeal Street team. He has asked me to remind everyone that due to park conditions, everyone needs to wear comfortable clothes to BBQ Fest. Tube tops would be your best bet. So there you have it. It’s not just me, it’s BBQ team captains offering that advice.

I’ll be back later today with a news post. Right now it’s time to shower, wash my team shirt, and charge all the spare batteries for the Tube Top Cam. Tonight I’ll try to get some pics of the booth posted to Facebook and Twitter.