Eat Local Memphis has another “Meet the Chef” interview posted for this weekend’s heritage pork BBQ fest. Michigan’s Steven Grostick is interviewed. There’s a photo of him holding a very happy pig. The pig clearly has no idea that he’ll be coming to a dinner plate near you very soon.

Casablanca starring Humphrey Bogart and Ingrid Bergman plays at The Orpheum tonight at 7:15. The 1942 romance is one of the last films in the theater’s Summer Movie Series. $7 adults, $5 12 and under. First 100 people receive a complimentary movie poster.

Is Hollywood Disco open again? I see in the weekly DowntownMemphis.com newsletter that it’s College Night there.

Also in the newsletter, I see that there will be an attempt on Beale Street tonight to set the world record for most pints of Blue Moon sold in a four-hour period. Why today? Because it’s a blue moon, the second full moon of the month. Since it takes the moon 29.5 days to orbit the Earth, this rarely happens, and it’s impossible to have a blue moon in February.

This week I posted on Facebook and Twitter asking if any bars would be showing the SEC games that are on pay-per-view this weekend. Unfortunately I got no response. I was told Double J will be showing the Alabama-Michigan game, but that’s on ABC so pretty much every bar will have it on.

Take a load off is the theme at the Memphis Farmers Market tomorrow. At 10:15 Chef Felicia Willett from Felicia Suzanne’s will demonstrate how to make cornmeal tarts with cornmeal from Delta Grind. Also, her locally made Flo’s products will be on sale at the market. Music will be Vic Reid 8-10 and Kenny Hays 11-1. There will be a bike ride leaving the market at 9, and there will be pet adoptions by the Tunica Humane Society 7-1.

Last night I went to the Flying Saucer after work, and two guys from San Francisco’s Anchor Brewing were there. Someone told them I’d written about their visit in my blog, and they came down and chatted and asked if they could buy me a beer. Instead of one of the Saucer’s usual offerings, I selected a bottle of Brekle’s Brown that they brought with them. Anchor keeps its beer lineup pretty stable, but they let their first brewmaster make his own creation, an all-malt, single-hop brown ale with a hint of citrus on the nose. Very tasty. 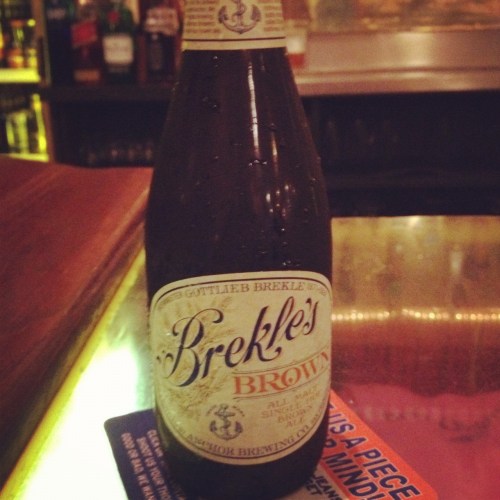 If you had plans for the Lynyrd Skynyrd show tonight at Live at the Garden, it’s been rescheduled to September 12 due to weather concerns. If that leaves you without plans, why not come down to South Main for Trolley Tour instead?

I may be at Trolley Tour myself, after a little pre-gaming at the Saucer starting at 4.