I forced myself to go home at 11 last night, because there’s a lot of good stuff happening today, and a lot of it is in the morning. I didn’t want to miss any of it.

My first stop today will be the Memphis Farmers Market at S. Front and G.E. Patterson. Hopefully I’ll get there by 10:15, in time to catch a little of Felicia Willett’s cooking demo at 10:15. Grabbing breakfast from one of the food trucks at the market sounds like a good plan. 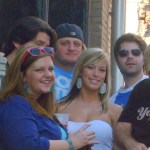 At 11 I’ll wander over to Max’s Sports Bar. Max’s is only a block away from the farmers market, in the Arcade Building next to the cheesecake shop, so it will be a quick walk. It’s the first Saturday of the college football season, and Max will have the games on all 10 of his TVs. The good thing about college football at Max’s is that he’ll print out schedules of what game will be on what TV, and tape them next to each TV. That helps you figure out which is the right seat for you. He also has a big deck out back, which will be really nice for the fall weather. Also, today is Ciara’s first day (pictured in center of photo, in white tube top) as day bartender. $2.50 PBR on draft plus a full selection of liquor.

What teams will I be rooting for as I watch college football this season? Five of them. Arkansas, Memphis, and whoever is playing Tennessee, Ole Miss, and Texas. As much as I enjoyed having Lauren behind the bar during previous football seasons on Saturdays, I must admit it will be nice this year to have a bartender who doesn’t wear that godawful UT orange.

The UT orange thing is also the reason I get along with Sutch at the Brass Door much better when it’s not September-December. (I’d say September-January, but let’s face it, there’s not a chance in hell UT will be good enough to secure a January bowl game) Thankfully, the Saucer does not allow Christina to wear her UT orange at work.

Anyway, back to today’s plans. About 1 I will walk or trolley north to the Memphis Music & Heritage Festival. There I will do what I do best: Wander around and talk to people. And drink PBR. Usually I have a no-side-trips rule at festivals, but with my two Foursquare bar mayorships (Blind Bear and Flying Saucer) so close by, I’m sure there will be side trips. I’m not the mayor of the Majestic Grille (John D, who has a breakfast named after him at the restaurant, has claimed that crown) but it’s usually a good side trip spot at MM&HF too. A strawberry basil martini on the patio might happen at some point this weekend. I’m thinking Miss Ella’s greens and hot water cornbread and then a Pronto Pup for dinner.

The Cochon 555 heritage pork BBQ festival is happening this weekend too. The Eat Local Memphis blog is doing a great job covering that festival, so keep your eye on it throughout the weekend.