Tonight I kicked it off at Pint Nite at the Saucer. By about 7:30 I hadn’t eaten yet all day (just didn’t have time at lunch at work) and was starving. I decided I’d earned a treat and headed to Bluefin, the popular sushi lounge on South Main. Friday night I had my plate party at the Saucer, and my friend Ciara who waited on us told me I needed to try the Gary Parrish roll at Bluefin. 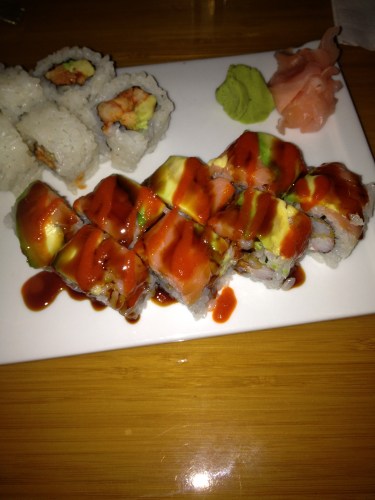 The roll is named for Gary Parrish, who is a radio host in afternoon drive-time for 92.9 FM in Memphis, and he’s also a columnist for CBS Sports. The actual name on the sushi menu is the “G. Parrish Anxiety Disorder.” The roll is topped with smoked salmon, avocado, sriracha and eel sauce as shown above. 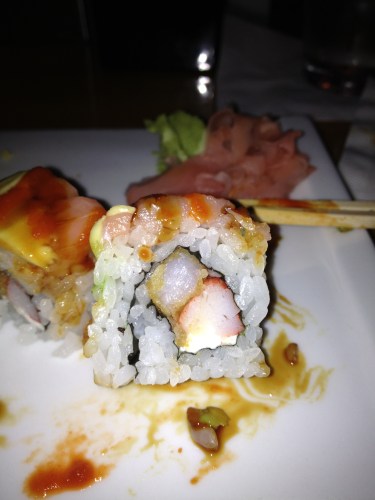 Inside the roll is shrimp tempura, crab stick, and cream cheese. If I had to describe this roll in one word, it would be “complete.” Complete in the sense that there’s not one thing that could be added to this roll to make it better. It’s the equivalent of going to a pizza parlor and ordering the super supreme with extra cheese. There are probably more toppings you could add, but it wouldn’t improve it anymore. I’m not sure if this is the best sushi roll I’ve ever had (I’ve had some good ones at Bangkok Alley as well) but this one is in the top three. You can get the Parrish Roll for $11.

Since one sushi roll is not enough to fill up, I decided a supplement was in order. I was leaning toward the edamame, but when I saw I could get a spicy crawfish roll for the same price ($6) I went with that, using the ginger to cleanse my palate as I went back and forth from one roll to the other. Despite the sriracha, one of my favorite toppings ever, on the Parrish roll, the crawfish roll was far spicier. I like spicy, though, so it’s all good.

I ate at the bar, located to the right of the restaurant, with its own entrance. Bartender David took fantastic care of me. If I had to find something minor to gripe about, it would be that their two HTDVs weren’t showing the Grizzlies in HD. Overall, though, first-class meal. I hear Bluefin recently changed ownership and I saw no sign that it had declined in quality.

David told me the Parrish roll was one of several new ones on the menu. It was his favorite of the new items, along with the Bengal roll (shrimp tempura, jalapeño  and cucumber, topped with spicy salmon, eel sauce, sweet chili sauce, and scallions).

They had some great music playing in the bar. It was all kinds of British Invasion classics including George Harrison’s “My Sweet Lord,” some Animals and Kinks live, and some American bands from the period that fit in. I asked David what Pandora station he was playing and he said he searched for “Waterloo Sunset by the Kinks.” My friends Jeffrey and the Pacemakers would have loved it.

A fine dinner. Thanks David and Bluefin.