My BBQ team, The Moody Ques, is going to have a few spots open this year. Our team competes in the shoulder category in the Memphis in May World Championship BBQ Cooking Contest, known colloquially as “BBQ Fest,” which will be held May 16-18 this year. We have one of the largest spaces in the park, and throw a big party. This year we have the Blind Bear completely managing the bar. WordPress (the engine that powers this blog) is our main sponsor, and head WordPress guru Matt Mullenweg will be in our booth. If you’d be interested in being a part of the team, you can either 1) shoot me an email at paul@paulryburn.com; 2) talk to me when you see me out; 3) talk to another team member if there’s someone you know better than me.

One new development: By Memphis in May rules we can’t have a DJ in the booth. However, we will have an iPod playing music, with the playlist put together by none other than DJ Cody from the Silly Goose. I may not hang out a whole lot late-night on weekends at the Goose, but I am a huge fan of what Cody does and I know we’re going to have some great stuff on that iPod.

Paul Morris who runs DMC emailed me with some info about the First Church Thursday night rooftop concert series starting April 11. People had wondered why they booked the concerts the same night as the Peabody rooftop parties. Paul told me that the concerts are only an hour long, and since the Peabody rooftop parties run until 11 PM there’s plenty of time to do both. Paul also said that First Church has a new minister who is excited about getting engaged with the Downtown community. The concerts are free, which is an appealing price whether you’re normally a churchgoer or not.

Take a minute to check out the NBA standings on Yahoo! Sports. In particular, look in the lower right of the page at the Western Conference standings, and look at that beautiful x- next to Memphis. That means the Grizzlies have made the playoffs. Tickets for the first round will go on sale April 6.

A restaurant named Blu was raided yesterday. This is a restaurant in southeast Memphis in Hacks Cross Road, and is in no way related to Bleu Restaurant in the Westin Hotel. Bleu is open for business.

I played poker at the Blind Bear last night. I hit some good hands and made it all the way to heads-up, where I lost to my good buddy Dennis. 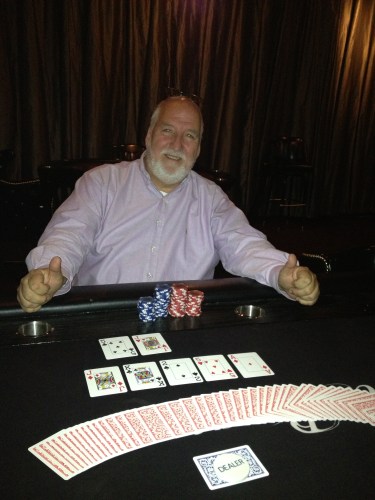 Congratulations to Dennis on the win.

My plan tonight will be to start at the Silly Goose to have a happy hour PBR at Jessica’s bar. After than, plans TBD.