Last night I stopped by the Flying Saucer for a Dos Equis Lager or two, and who did I discover sitting on the rail but Bradley D. Birkedahl and Slick Joe Fick, two-thirds of legendary Memphis rockabilly band The Dempseys. They invited me to join them for beers and I snapped this pic. 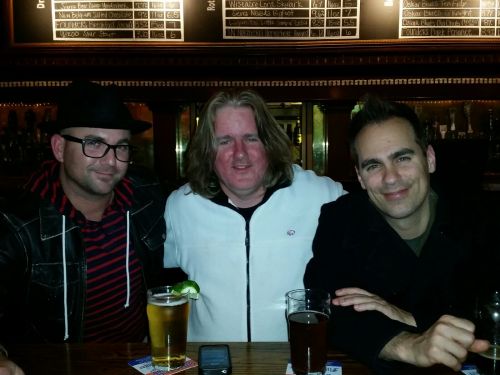 From 2003 to 2010, I went to many Dempseys shows at the Saucer, Huey’s, and Blues City Cafe. They have since gone their separate ways and are enjoying successful careers. Thanks for inviting me to hang out, guys. It was truly a pleasure seeing you.

The Memphis Fire Museum is holding a Breakfast with Santa on Saturday, December 13. Santa arrives on a MFD engine at 8 AM. There will be two sessions. The first will have breakfast from 8 to 9 and professional photos with Santa from 8:30 to 10. The second will have breakfast 10 to 11 and photos 10:30 to 12. $10 for adults, $7 for kids. Admission includes a full breakfast, story time with Izzy the Dalmatian, and entrance to the Fire Museum. Make reservations at firemuseum.com.

CNN is coming to Beale Street on New Year’s Eve. “An Evening with… ALMOST… Elton John” will be playing the street that night and CNN will broadcast the entire show. This is CNN’s first time ever on Beale. I’m normally not a big fan of Beale Street on NYE but I have to admit I would consider going to this.

The Sacramento Kings have filed a protest of Thursday’s loss to the Grizzlies. The Grizzlies inbounded the ball with three tenths of a second left and scored the winning basket. The Kings said that one of their players may have tipped the ball, which would have started the clock sooner.

Sbnation.com has updated its college football bowl predictions. They’re projecting Memphis playing Arkansas in the Birmingham Bowl on January 3. That would be an interesting matchup. The Hogs need one more win to get bowl-eligible.

The Grizzlies host the Houston Rockets tonight at 7 at the FedExForum.

That’s it for now. I have tomorrow off for my birthday, so I’ll be staying out a bit later than usual tonight.