If you live in the Poplar-Perkins area, be on the lookout for a missing dog with no collar: 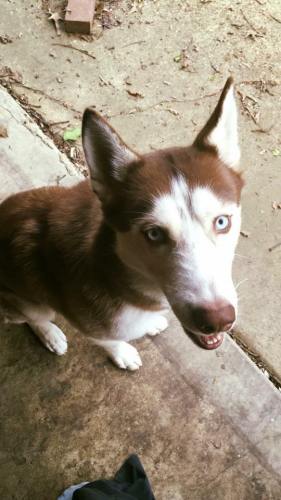 He answers to Niko and belongs to Panda, my Saturday brunch bartender/manager at Bardog. Email me at paul@paulryburn.com if you find him and I will get you in touch with Panda.

Anyone else finding that the light at Front and Peabody Place is a traffic hazard? Every morning I take Peabody Place to Front and turn left. The light remains green for Front, and the walk signal remains “walk,” for over 2 minutes sometimes before the signal turns to “don’t walk” and starts counting down from 19 to 0 and then finally Peabody Place gets the green. The light stays red for so long in the Peabody Place direction that drivers assume it’s malfunctioning, and turn left on red.

I won’t be turning left at that intersection for the next month though… tomorrow Riverside closes for Memphis in May and bluff repair. It will reopen May 30. Alternate route is south on Second to G.E. Patterson, take a left, right on Third, right on Crump, and then exit turning right south on to I-55.

It’s Growl Towel time! The Grizzlies host the San Antonio Spurs at FedExForum tonight at 8:30. If you’re going to Game 3, arrive early for heightened security at the door. If you’re not going, you can watch the game on ESPN.

The DMC is opposing a proposed parking lot at the northwest corner of Front and Pontotoc in what is sometimes known as the Front Street Chicken District. The DMC says the block between Front and Wagner is too valuable to waste on a surface lot.

iPhone users: Beware of a phishing scam informing you that your Apple ID is about to expire.

Last day to purchase 3-day passes for Music Fest. The offer goes away at midnight tonight.

Over the Edge happens tomorrow. People will rappel off the Raymond James Tower overlooking the Mississippi River to raise money for orphans.

A few days ago, I said that Max was polling his customers on whether to go nonsmoking with his sports bar, and that I had mixed feelings about it. Now that the poll has closed, I will share my feelings.

1) On a personal level: I am a nonsmoker. Therefore I would prefer to hang out at a bar that is nonsmoking, although it is not such a strong preference that I would let it keep me from seeing my friends.

2) My friends: Several of my friends who hang out at Max’s more than any other place are hardcore smokers. If Max went nonsmoking, their favorite place as they have known it since 2007 would no longer be the same. I don’t want them to lose their favorite spot. I think about how I would feel if the Blind Bear changed so drastically that it became a place I would no longer care to frequent. There would be a sense of loss, for sure. I hate the thought of my friends who call Max’s their home experiencing that.

3) Smoking is keeping people away: I can go back as far as 2009 and find blog posts I wrote saying that Max’s is the friendliest bar Downtown, the easiest to meet locals and make friends. I know FOR A FACT that there are regulars who would not have found Max’s if not for my blog. I wonder how many more people tried Max’s, and understood what I wrote but decided not to go back because of the smoke. I wonder if there are people who I would have become good friends with at Max’s, but never met them because of the cigarettes. I wonder if my friends on Squeal Street BBQ or Porkosaurus or my own team would have had a few additional members this year, but because of the smoke they/we never met those people. That’s a shame.

4) The fact that smoking in public places is legal at all, anywhere in Tennessee in 2016 is just fucking stupid: Most states have enacted smoking bans. Check Wikipedia for a list.

The official BBQ Fest app has dropped. Search for “Memphis in May Barbecue” on Apple or Android to get it. It is a free app. Maps, team lists, merchandise, FAQ, and more.

That’s it for now. Back tomorrow probably.