Niko, the missing dog I posted about yesterday, was found in the afternoon a few blocks away and is safely home with his family.

The Orpheum has announced its summer movie series for 2016. Of note: Two venues will be used for the series, with about half at the Orpheum itself and half at the Halloran Center next door. Also notable: Rocky Horror Picture Show will be shown on June 10. In the past it has usually been late August or September.

In other Orpheum news, Puscifer plays tonight. Puscifer is the project of Maynard James Keenan, formerly of Tool and A Perfect Circle. Tickets $38-58 or $250-350 VIP.

From the Memphis Flyer: Remembering Rufus Thomas and Prince at the New Daisy, 1997.

Historian Jimmy Ogle leads a free Riverfront Walking Tour today at 2. Meet at the foot of Monroe Avenue and Riverside Drive. Ogle will discuss the Cobblestone Wharf and the sinking of the Sultana.

Ugh… renovations of the Benchmark Hotel, already ongoing for 6 years, are over budget and another investor may have to step in and finish the project.

You guys remember former Memphis Tiger Preston Laird? He was the white kid who played during the Joey Dorsey era, best known for coming in with 0:16 remaining in the game with the Tigers up 105-63. He’s had a successful post-basketball career. This week he was named the UNLV men’s basketball director of operations, having previously held the same position at New Mexico State. I would say he’s following a similar path to Pastner but I don’t want to jinx the guy.

There’s a Prince Purple Party in the Twelve Bar, the upstairs of Jerry Lee Lewis’s club on Beale from 5 to 9 tonight. DJ Swagg will spin the Prince hits. It’s a fundraiser for the Christopher Hope Foundation Food Drive, so bring a non-perishable food item. Free to attend.

Check out this incredible video of Prince playing guitar on While My Guitar Gently Weeps at the 2004 Rock and Roll Hall of Fame induction.

Thanks to WordPress guru Otto for fixing some of my plugins last night at Max’s Sports Bar. In particular, take a look at my Loflin Yard post from two weeks ago and notice that if you click on a photo, it opens up a carousel. Before, when you clicked on a photo, it would open up the photo in 500×500 with an ugly Title: P1073106 page with no way to click forward and back to get to the other images. With that fixed, I can use this blog to host my Wine Race and BBQ Fest photos and not have to resort to Facebook. Charging up the camera batteries so I will be ready for Wine Race tomorrow.

After leaving Max’s around sunset, I ran into friends a little ways up Main. My artist friend Bad Shane painted a tribute to Prince on The Smurfy Door: 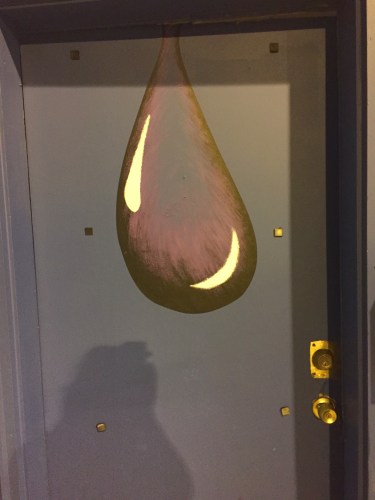 After that it was wing grilling time. 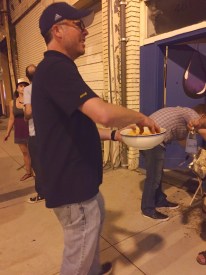 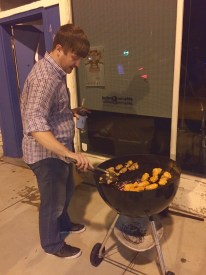 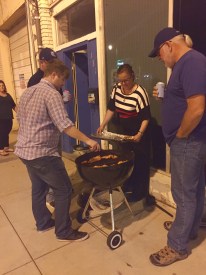 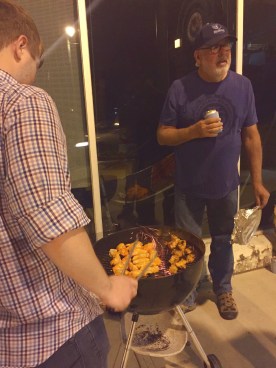 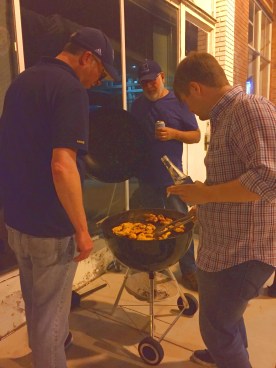 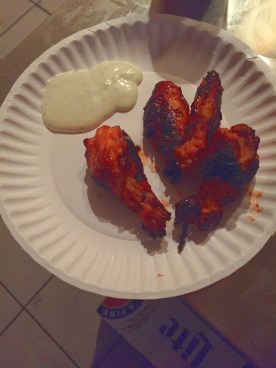 If you weren’t there, you missed out on a good time!

Plans for today: Farmers Market, brunch with Bloom at Bardog (with Panda managing so I will get to hear about Niko’s return), then more wings at the Southern Hot Wing Festival. My BBQ team is competing at Southaven Springfest today, but since I am not one of the cooks my presence is not required. They will send me photos of the shoulders and the trophy so I can do my PR job from Memphis.

I’ll have to do Bardog without my “DAWG” John D who is cooking at Springfest, but I will find a way to muddle through somehow. Beautiful weekend for people-watching and tube top watching. Time to get outside!