As I have said many times, there is a lot more to love about the Memphis Farmers Market than simply fresh produce. Yesterday I visited my favorite food truck at the market, the tandoori truck, and tried an item I had never had before. 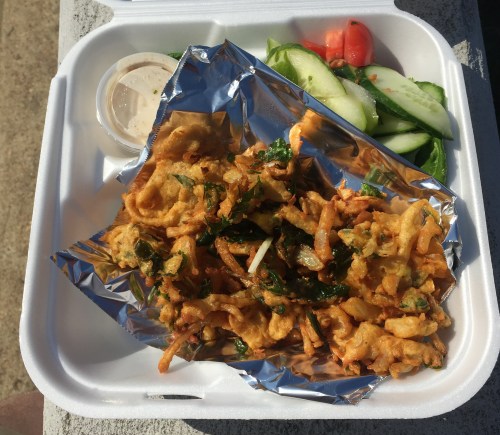 Spinach and onion pakoras with a side of veggies and yogurt for dipping. This was a monstrous amount of food for $7. Cooked from scratch and it only took about 5 minutes. They have sauces you can put on your food at the tandoori truck, including an Indian plum sauce and several of the hot sauces sold at the market. The pakoras are hot when you get them, so it’s a good idea to wait a couple of minutes before digging in. By the way, I don’t know if I have any vegetarians who read this blog, but on the off-chance that I do, more than half the items the tandoori truck sells are meatless.

I found a seat at a table in the main corridor of the market, where I had plenty of room to eat my pakoras as I watched people shop.

What is the Memphis Farmers Market, Alex?

My seat in the front part of the main corridor gave me an excellent vantage point to people-watch. And many of the people were women in yoga pants! “Why have I not been coming here every week for the entire 11-year run of the market?” I wondered as I watched people walk around.

After finishing my food, I was a man on a mission. My Saturday brunch bartender Bloom had mentioned that she wanted some mint so she could make mojitos. “They sell it at the grocery store, but in such huge bags that I throw most of it away,” Bloom told me. After visiting several vendors selling green, leafy stuff including lots of kale, I found what I was looking for. 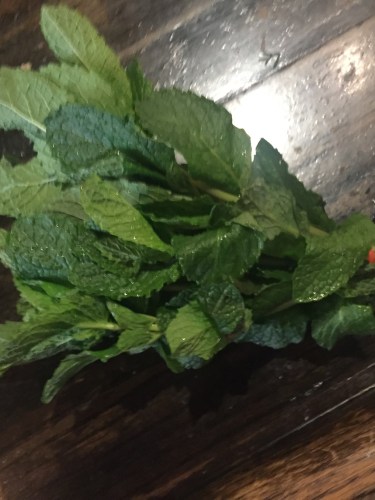 I found a perfect-sized bundle of mint for Bloom for only $2. “Which one is the mint?” I had to ask the vendor, because it was indistinguishable to me from all the other green produce.

The Farmers Market runs every Saturday from 7 AM to 1 PM at the pavilion at Front and G.E. Patterson. It runs well into the fall months. The weather was beautiful yesterday but at one point I found myself wishing it was late September as I walked around the market.

I forgot that Bardog gets super busy super early the day of Hot Wing Fest. I am known for getting there right at 11 and being the first person in the door (or second if my “DAWG” John D goes in first). Yesterday I got there precisely at 11, yet I was the 12th person in the door! I barely got a seat at the bar! Luckily it was near the window so I could watch people go by as they walked to Wing Fest… and watch MLGW dig up Monroe Avenue, as they have been doing every day for the past four months.

About 2 I walked over to Wing Fest. I was happy to pay my $15 to support the Ronald McDonald House but I didn’t stay long. I made one loop through the park and I was out. Only about 20% of teams had wings out as I walked around and there were long lines for those that did have them. Too many strollers, too many people who didn’t know how to put one foot in front of the other. If I go next year, my friends the Pirtles have a VIP option for an additional donation to the Ronald McDonald House and I may do that. At any rate, by 2:45 I was headed south to see my favorite pair of librarian glasses at the Blind Bear.

I considered a trip south to Max’s Sports Bar at 4:30, but decided I was comfortable where I was and remained at the Bear. Before long texts from Southaven started coming in. The Moody Ques were down there competing at Springfest and the results were good. For the first time since we started competing under our current name, we won a trophy for food! We took third in the Seafood competition. I know Erik is our point man on seafood, so congratulations to him as well as Frank, Clay, John D and everyone else who was part of the Southaven event.

There was more good news: We finished 12th out of approximately 50 teams in Shoulder. This was said to have been a better finish than our 9th in Atoka because of the number of teams.

Hey gang, someone want to take a photo of the trophy and text it or email it to me? That absolutely needs to be on the team website.

I would also like to congratulate my friend Heath and his team Victory Lane BBQ on their Grand Champion win at a MBN/KCBS event yesterday at Springfest. Great job!

Keelon Lawson has made it publicly known that if Tigers basketball coach Tubby Smith does not retain him as an assistant, his sons K.J. and Dedric are done with the University of Memphis, and they can say goodbye to 2019 prospect Chandler and 2021 prospect Johnathan. I know this is an unpopular opinion but I think Tubby needs to show Mr. Lawson the door. How can Tubby make the program his own if one of his employees bullies him and has the ammo to continue to bully him until possibly 2025?

As I walked down Main Street on my way to the Farmers Market yesterday, I noticed that a new cigar lounge is soon to open on the block between Pontotoc and Vance, on the east side of the street.

Tuesday night the Orpheum will have a free public showing of 1989 movie Purple Rain, a special tribute to Prince. If you’re thinking about bringing the kids, might want to keep in mind that this movie is rated R due to sexuality, nudity, and violence.

Cafe Pontotoc is hosting a reservations-only Cinco de Mayo supper on Sunday, May 1. $45 charge. The restaurant will open at 6 and serve dinner at 7. There will be chips and dip, build-your-own tacos, baked chicken enchiladas or spinach enchiladas with rice and beans, and tres leche. To drink there will be margaritas, Mezcal with salsa chasers, and Mexi-beers. Call 901-249-7655 for reservations.

It’s Debauchery Day! Beale Street Wine Race kicks off with an opening parade into Handy Park at 1 PM, followed by Queen of the Vine, the grape stomp, and the wine relay. If you’re not driving, get you a Call-a-Cab across the street at Wet Willie’s. Know how I joke about being “the bad, bad man with a smoothie in his hand” at the Farmers Market? I really am a bad, bad man when there’s a Call-a-Cab in my hand on Beale Street. Of course I will be supporting Team Blind Bear. About to head down there now to see if my favorite pair of librarian glasses needs any help slipping into her Queen of the Vine outfit. Back tomorrow with more news!