I didn’t make it to Loflin Yard this weekend, although looking back I sure wish I had gone there rather than Wing Fest. My friend Jeremy Miller did, and he took a photo of this gorgeous cheese plate, which I asked for permission to use on my blog. 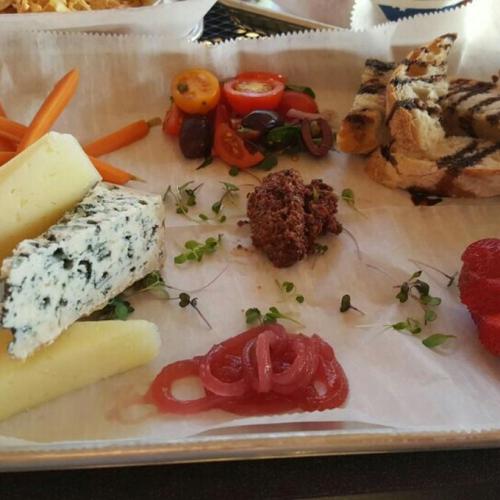 I have not heard of anyone who has had a bad experience at Loflin Yard. What a great fit for the neighborhood. It’s in South End, at 7 West Carolina.

“I don’t know you, but I know you from the blog” strikes again: Yesterday at Wine Race, I was catching up with Bones, one of the big dogs on Squeal Street BBQ. He and I were talking about the Moody Ques’ strong showing at Southaven Springfest the day before. Nearby was my Blind Bear bartender B-RAD, off work early so he could participate in the 4-person wine relay.

“Hey, are you Brad?” asked Bones. “I don’t know you but I feel like I know you from reading Paul’s blog.” They talked for a few minutes and Bones asked, “Do you do BBQ Fest?”

“I’m not on a team but I go visit The Moody Ques and Porkosaurus,” said B-RAD.

“Well, now you have another team to visit,” Bones said. “Squeal Street BBQ. We’re a few booths down the sidewalk from these guys (pointing at me) in Shoulder. Come see us and get some BBQ.”

I think it’s very nice that the Squeal Street members who have never met B-RAD will get to. Be sure to ask him what it’s like to have a well-known local blogger at his bar every Sunday, and if he has any stories about me.

I haven’t looked at the photos I took yesterday, but I have a feeling they’re not very good. I was more interested in just hanging out with my friends than I was in taking photos. I have to say it was a real pleasure to be part of the Blind Bear family yesterday. The Bear’s Queen of the Vine contestant gave me her hat to wear after the event was over. 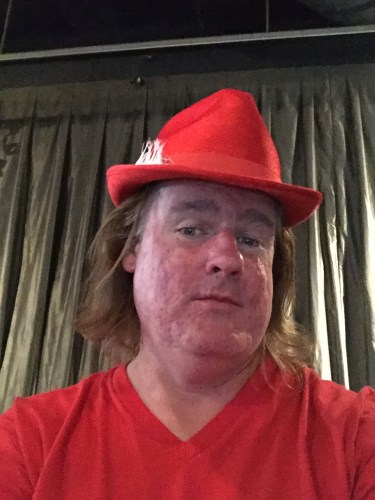 Several people commented that the hat looked good on me, so it’s probably coming to BBQ Fest at least one day.

Comedy returns to The Brass Door tomorrow night at 9. Katherine Jessup of DC and Justin Thompson of Atlanta will headline, and also appearing will be Memphis Rap Queen Happi Johnson, and the Oxford, MS Vigilante Comedy duo of Connor King and Sam Lyons.

The Redbirds play the Round Rock Express at 6:35 tonight at AutoZone Park. Yesterday at the Blind Bear a friend of mine told me how to watch Memphis’ AAA team in style. “Get a club-level ticket for $62,” he told me.

“Sixty-two dollars?” I replied, “To watch a baseball game?” That didn’t start out sounding like a deal to me.

“Yeah, but it’s all-inclusive,” he told me. “You not only get a club seat, but an all-you-can-eat buffet and all-you-can-drink beer and wine. For a 7:00 game, I think the buffet starts at 6 and goes until 8:30. Wine and beer through the end of the 7th inning.” Obviously I wouldn’t want to spend that kind of money every night, but for someone like me who goes to one or two games a year, it’s something to consider.

I got clarification on how the Moody Ques’ 12th place finish in shoulder in Southaven was better than our 9th place finish in Atoka. The Memphis Barbecue Network uses the same scoring system at every event, and our score in Southaven was seven points higher than our Atoka score. So our cooking continues to improve. Some of the most successful BBQ competitors in the park came to our cooks and said, “Keep on doing exactly what you are doing. Do not change a thing. It’s always the luck of the draw which table your blind box ends up on. You can’t help that, but your preparation is on point. You are going to be a serious competitor.”

That’s it for now. It’s Melissa Monday night at Bardog. I will be there after work.