Two weeks ago yesterday, I walked into Max’s Sports Bar. I ordered a PBR at the bar from Mike and decided to walk to the back and see who was on the outdoor deck. It was a good crowd. My friends K and J and Otto were sitting at the front tables, and in back leaning on the rail were my friends Bad Shane and Leigh, Gary, and Stevie G and my adopted sister Sarah. (I’ve been bad about texting my new sis this week.) I decided to take a seat at the table with Otto and K and J, and there I remained for the next three hours, watching people come and go. We got a break from the humidity that weekend, so it wasn’t stifling, but still, the sun beating down on me in 90 degree weather was a bit much. “I wish I were sitting in the shade,” I thought. “That would help a lot.” 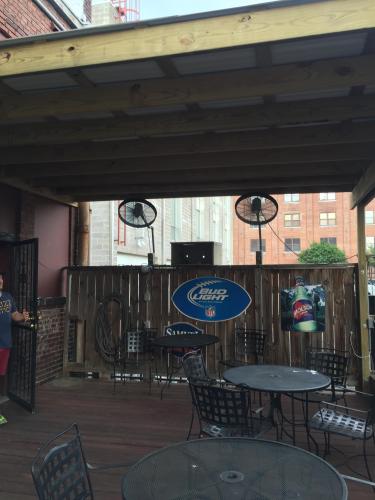 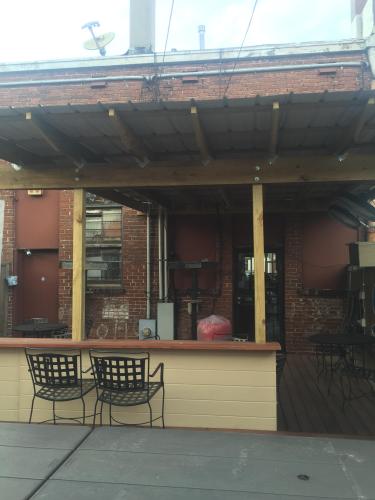 This week Max added a roof to his outdoor deck. It came in handy on its first night, as people were able to stay outside when rain moved through. It will provide much needed shade in the summer, and protect customers from the elements year ’round. Very nice.

Note that not the entire deck is covered, so if you want to get some sun, you still can.

The deck will see some use tomorrow. Max is having another crawfish boil, possibly the last of the 2016 season from 1:30 to 8:00.

One of the better giveaways of the season is coming up today at the Redbirds. The first 1500 fans in the gate will get a replica of the 2006 St. Louis Cardinals World Series trophy. Gates at 5, first pitch 6:35. Fireworks after the game.

Plans are coming together for a sky-high transformation of The Pinch. The sea of parking lots won’t be around forever. St. Jude is expanding its campus to build one resembling Amazon’s, with some buildings as tall as 12 stories. Overton Avenue will serve as a connector between the campus and Bass Pro at the Pyramid, with restaurants and shops lined up and down the street.

There’s also news on another up-and-coming area: The Edge and the Medical Center District are seen as keys for bike share.

Attention East Memphis: You can now get cans of High Cotton ESB and Scottish Ale at the SuperLo on Spottswood.

JD and the Midnight Howl perform Sunday night at Downtown Huey’s at 8:30 PM. Joel DeSilva was raised in a musical family that toured internationally. Not only has he acted in independent movies, he has performed with B.B.King, A.C.Reed, the Fabulous Thunderbirds, Reverend Horton Heat, JJ Grey, Mofro, Nick Curran, the Smithereens, Ray Charles, Foghat, Los Lobos, the White Stripes, and Leon Russell.

Chef Gary Williams of DeJaVu has announced that the restaurant’s new food truck is wrapped and ready to go.

I’m back from the Farmers Market and will have a post later today about what I bought there. I walked down there at 7:20 and the humidity was already awful. When I got home I checked the weather. 88/feels like 95 at 8:37 in the morning. Ugh. Anyway, I’ve got a couple of hours to rest and then it’ll be Bardog time at 11. For those of you attending the free yoga class at the Farmers Market this morning, enjoy! Check back this afternoon for a food post.