Every year, Bardog Tavern throws a huge outdoor party that raises money for St. Jude. There is a 5K that draws well over 1000 runners every year. There are other activities that raise money for the hospital, including food sales and a dunk tank. Other businesses on Monroe have gotten in on the fundraising and the event was renamed Monroe Fest a couple of years ago. The penultimate activity at Monroe Fest is the cutting of someone’s hair to raise money for St. Jude. Two of my favorite bartenders, Panda and Bloom, have been head-shaving victims, and my landlord Jay Hollingsworth, may he rest in peace, had his ponytail cut off for the charity.

As of yesterday Bardog has its head-shaving victim for 2016: Burlesque dancer and my neighbor Kitty Wompas. 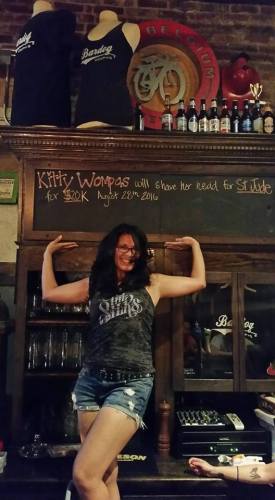 Kitty danced in burlesque shows at Kudzu’s back when it was still open. More recently she has danced in shows at Earnestine & Hazel’s. She was the host of the very popular Burlesque Bingo at the Mad Earl. This Kitty ain’t cheap though. She will shave her head if $20,000 is raised for St. Jude by the date of Monroe Fest, August 28.

My absolute favorite election website, even more so than RealClearPolitics, has released its first electoral vote map of 2016. FiveThirtyEight’s map gives Hillary Clinton better than an 80% chance of winning the election, carrying all the Obama 2012 states plus North Carolina and Arizona. Be sure to scroll down the page and see all the maps, graphs and charts. Good stuff.

Yesterday I blogged that Memphis Made Brewing Co. was bringing back one of its most popular events, a sushi class, on Sunday, July 24. Well, the day before, they are bringing back another popular event: their cornhole tournament. Up to 32 teams can enter, two people per team. $50, $25, and $10 gift certificates for first, second and third. Must sign up by July 22, and all participants must be 21 or older.

In other beer-related news, Midsouth Malts is hosting a National Mead Day Tasting Saturday, August 6 from 2 to 4 PM. Bring one to share, or just show up and try some.

The City of Memphis is attempting to retain police officers, who have been leaving in droves the past couple of years, by throwing money at them. Well, not a lot of money. The officers will receive a $500 retention bonus and a 2.75% to 3.75% pay raise. It’s better than nothing and it’s a start, but personally I would like to see each officer get a $2000 retention bonus and a 4% to 6% raise. I know the budget may not allow it, but it’s what they deserve. Thank you to all the police whose efforts have allowed me to roam the streets of Downtown for 14 years without ever once being a crime victim.

Years ago I was watching a video (I tried to find the YouTube link just now, but couldn’t) of a leopard prowling the jungle of Kenya. She stopped at a tall, dark bush and stared when she saw movement. A huge snake, a python I think, was slithering, lurking under the bush, out of sight. She lunged at the snake, grabbing it by the neck with her powerful jaws, and then dragged it out into the sunlight and walked away. Her purpose was not to kill the snake, but to expose it, to leave it out in the open for all to see. Most of us have two days left before a long weekend, so here’s a motivational message to help you get through those two days: Be the leopard.

Off to work, probably a second post at lunch or 5:30. I expect to have Farmers Market news to talk about if nothing else.