Yesterday I walked down to the Memphis Farmers Market and went to the food truck area in the back to survey my breakfast options. I wasn’t in the mood for a smoothie from the So Fresh Juice truck, and nothing at the Fuel or Monkey Train Grazing Co. food trucks quite struck a chord with me.

Then I turned around.

“What is that?” I asked, pointing at a cinnamony-looking pastry. 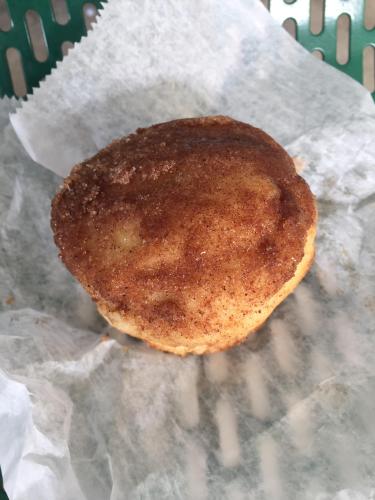 “That’s a duffin,” I was told. “It’s like, half doughnut and half muffin.” It was $3. I bought one and walked back to the Farmers Market concourse. All the tables were taken, so I sat on the wall in front of the Market and ate my duffin. It was good! It was cinnamon sugar flavored. There are other flavor duffins as well, which I will try in future weeks. If you want to read more about duffins, Holly wrote about them in 2014.

By the time I finished my duffin, the clock had ticked past the 10:00 hour. “Earnestine & Hazel’s is open,” I thought. “I’ll walk over and see what Clarence is up to.”

This is what Clarence was up to: 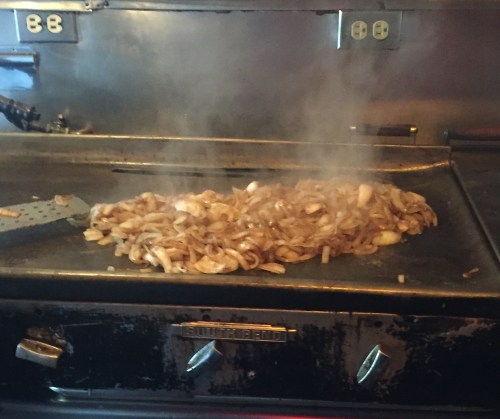 Earnestine & Hazel’s signature food item is the “Soul Burger,” a burger cooked on this very grill, with mustard, mayonnaise, pickle, the grilled onions you see above, and a bag of chips on the side. Many Memphians claim it is the city’s best burger. I disagree (the Double-Double at Dyer’s on Beale Street gets my vote) but it is definitely in the top ten. There are few experiences more Memphis than dropping a five in the jukebox, playing some tunes, and then ordering a Soul Burger and a beer.

After E&H it was time for my normal Saturday routine, brunch with Bloom at Bardog then over to Blind Bear to see my favorite pair of librarian glasses. We had a special visitor back in town for the weekend, the co-founder of my BBQ team, Moody. 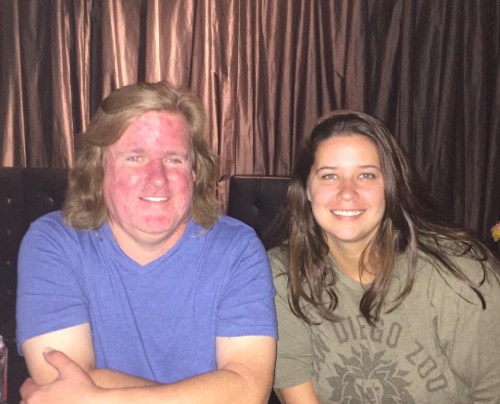 Moody was hitting all the spots and seeing her peeps. She won’t be able to make it for Burger Fest but will be back in town later this year.

Is this not the most awesome shirt ever? 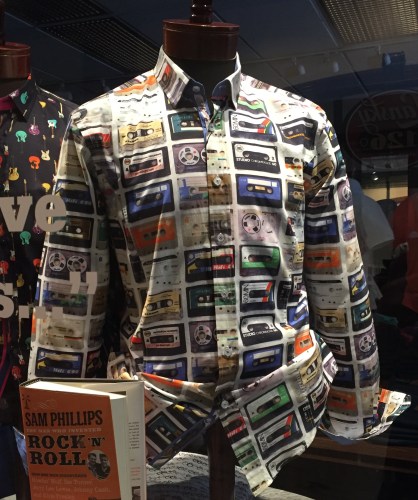 I walked over to the Peabody this morning to use their ATM. It’s across the walkway from Lansky Bros. clothing store, and this shirt was in the window. If you can’t tell (click the image to see it in a larger size), those are cassette tapes on the shirt. It’s a perfect gift for anyone who listened to music in the early Eighties.

Whoever thought to put an ATM next to Lansky was a genius. I bet there’s a lot of money that never even makes it out of the building.

Hotel Napoleon, the boutique hotel soon to open at the southeast corner of Third and Madison, is now hiring. Send a resume to hnhiringyou@gmail.com to be considered.

Quench is having a wine tasting Friday evening, August 5, from 5 to 8. Quench’s wine tastings are always educational, and this one will feature the products of Washington State producer Charles Smith. His wines are a modern style, designed to showcase the grape and the region in which it is grown, while being ready to drink right off the shelf. As always there is no charge for this tasting.

There will be a benefit concert for singer Ruby Wilson this afternoon at 2 at B.B. King’s on Beale Street. Live music, special guests, and a silent auction.

Time for D-RANKS with B-RAD at Hung Over Like a Bear Sunday brunch at the Blind Bear. I just did a count; today will be my 83rd consecutive Sunday at Blind Bear. Later in the day I plan on spreading a little sunshine at my “home away from home on the south side,” Max’s Sports Bar. There’s no Sunday Fun Day like a Sunday Fun Day in Downtown Memphis and it is time to do it up right!