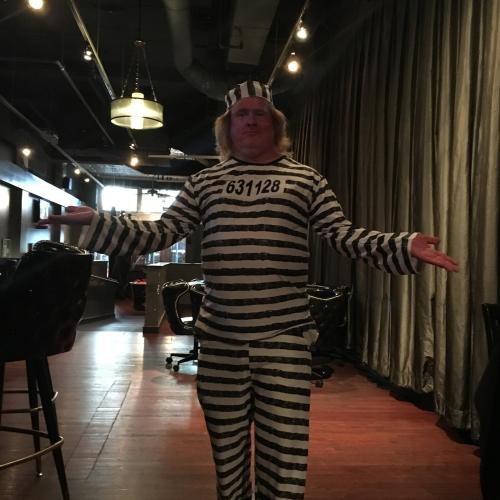 Thanks to the organizers of Sinners for Saints Halloween Ball II for another fantastic party last night at Stop 345! I found my old Monopoly set and pulled the Get Out of Jail Free card which allowed me to attend the party. I had forgotten how much energy the Super 5 bring, and of course it was a treat to see Charvey Mac in the back room. By the way, if you missed seeing Charvey at the party, you can catch him every Wednesday at 10 at the Silly Goose.

Unfortunately I did not make it late into the evening. You know what’s a really bad idea? Drinking beer all day long and then switching to liquor at 9:30 PM. There were Jello shots galore and I found the gummy worms and got a cup of them. We all know that’s a mistake. Then I discovered that my friend Mary was working the back bar. “We don’t have PBR,” she told me, so I decided to drink the punch instead. By about the fourth cup of punch I was in la la land! Apparently the punch they served was not Hawaiian punch that you can buy in two-liter bottles at Kroger.

I found myself standing around bored at times. “I’m basically the only one of my friend group here who isn’t an organizer of this party,” I thought. Hey guys, if you need someone to sit around and drink PBR while you work on the details of the party for 2017, let me know. If you need references I’ll give you the BBQ team’s email address.

Got a couple of insider tips for my readers based on things that happened yesterday morning. The Farmers Market invited kids young and old alike to wear their Halloween costumes, and with unseasonably warm weather for late October I decided to take them up on it. I wanted to visit the So Fresh juice truck so I could be the bad, bad man with a Smoothie in his hand, but the truck wasn’t there. So here’s my first insider tip: As you walk into the market from the main entrance, the second booth on the left is an Italian ice and frozen pop vendor. The key lime frozen pops are SO good. I had two of them!

My second insider tip is for my vegetarian friends. After the Farmers Market I was sitting at the bar at Earnestine & Hazel’s sipping a PBR, and a couple down the bar from me ordered their first-ever Soul Burgers. Clarence had the onions on the grill, preparing enough for an entire day’s worth of burgers. He told the couple that he can make a version of the Soul Burger without meat. “I use all the same ingredients, the warmed bun, the mayonnaise, mustard, pickle, cheese,” he told them. “But instead of a meat patty I put extra, extra onions on there.” I will never order a meatless Soul Burger but I have to admit that does not sound bad at all. I sure wouldn’t want to kiss anyone who just got done eating that sandwich though!

If anyone is looking for a job, I saw a sign that said Maggie Moo’s is hiring. My GOP friends may want to forward that information along to party chairman Reince Priebus, who I suspect will be job hunting sometime soon after November 8.

I want to thank Circuitous Succession for their hospitality Friday night. I went there for the PBR Art exhibit and I checked out their regular collection as well. Everyone there was so friendly and down-to-earth. In addition to art shows, the gallery has yoga as well.

Freewheel’s final Slow Ride through the Medical Center District happens this Wednesday, November 2, at 6 PM. It is free to join and the ride is relaxed and a chance to get familiar with the area that would not be possible if you toured it by car. The ride will depart at 600 Monroe, next door to High Cotton, and you can arrive early for a discounted pint at the brewery.

The title of this post is making me think maybe I should create a Merle Haggard Pandora station. That would not be a bad thing at all. I remember when The Dempseys used to do their cities & states medley of songs… the band would always look at me when they got to “Okie from Muskogee” because I always drew a square with my hands in the air to the line “a place where even squares can have a ball.”

Wow. Arkansas, Memphis, and Tennessee all have games in the 2:30-3:00 time frame next Saturday. Max’s Sports Bar is going to be just stupid packed.

Time for my weekly trip to Sunday school! B-RAD’s topic this week is “PBR is proof that Jesus loves us.” Yay Jesus. That’s it for now. I’ll be back tomorrow with more news.