I had to work yesterday, so I didn’t go to the Liberty Bowl. After I got off work, I went to the Blind Bear, where there were several local Georgia fans celebrating their school’s victory. My favorite pair of librarian glasses had all her Georgia gear on. “We were a patch of maroon sitting in a sea of purple,” indicating that their tickets had been in the TCU section. “They were SO nice. We were all getting along, high-fiving each other.” 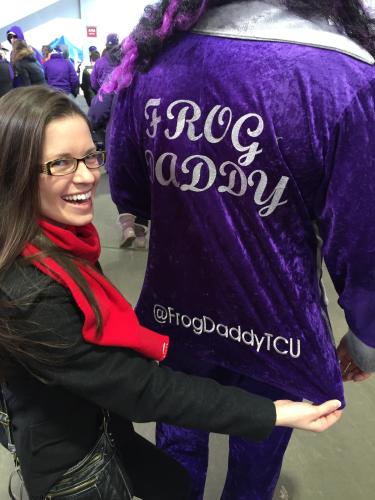 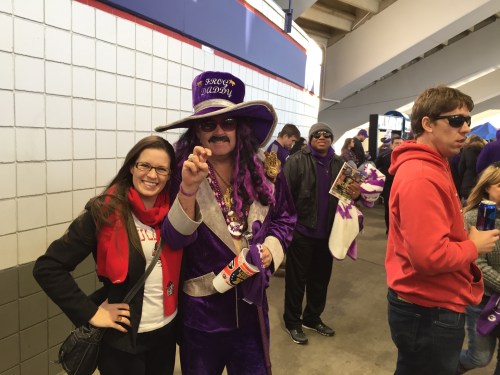 Even the Frog Daddy stopped to pose for photos with a Georgia fan!

Due to work, I really didn’t get to interact with Georgia fans (non-locals) or TCU fans much this year. I miss that. I think starting next year, I’m going to take the day before the Liberty Bowl parade and the day of the Liberty Bowl parade off. Those are the days when out-of-towners are getting their bearings down here and I can help them a lot.

Two years ago, I went to Bardog as usual on a Saturday. The Liberty Bowl that year was the following Monday, Texas A&M vs. West Virginia. I expected to see some Aggie fans in the bar. Wrong! Within 20 minutes of opening, the bar was a sea of blue and gold. These were older West Virginia fans, age 50s mostly, who’d built up the financial resources to travel well, even far from home. When they found out I was a local, they asked if I would mind answering a few questions, and I said sure. “We want to know where YOU go. We’ve been told what the tourists do. But we want to live like a local while we are here.”

“Well, the two things you’ve been told about that tourists do, that are worth going to, are the National Civil Rights Museum and Gus’s,” I told them. “The locals don’t spend a lot of time on Beale Street but there is a place down there called Dyer’s that has great burgers. As for the Rendezvous, if you want to go there for the experience that’s fine, but you’ll get better BBQ at Central down on the south side. If you want somewhere to eat that’s a little more elegant, try the Majestic.”

I continued, “The locals tend to hang out at bars mostly on Main or within a block walk of Main. You found one of my favorites right here (Bardog). Down a couple of blocks south on Main you’ll see the Blind Bear. That’s another of my favorites. If you go today, the bartender B-RAD (still working Saturdays at the time) can give you a lot of good information on what to do. About a mile south on Main there’s a place called Earnestine & Hazel’s that you’ve got to check out. It used to be a brothel. Down G.E. Patterson from Earnestine’s is Max’s Sports Bar. It’s small but there are a lot of TVs and it’s a locals’ bar. People are really friendly there. I don’t know if you’re night owls, but at 10 PM the best nightclub in the world, Paula & Raiford’s Disco, opens over on Second. There is no place like this in the world.” I gave them the address to my blog, too.

The next day I once again led off at Bardog. About 5 minutes after I got there the sea of blue and gold returned. “PAUL!” they shouted. “We had an awesome day yesterday because of what you told us. We’re buying you shots!”

Anyway, I’m posting that conversation for the benefit of any TCU or Georgia fans who may have stumbled upon my blog. All of what I said still applies, except B-RAD works Sundays now. The Saturday day bartender (11-6) is my favorite pair of librarian glasses, pictured above, a Georgia fan. Go see her!

I will also note that Liberty Bowl coaches have been known to pop up at Max’s Sports Bar in the day or two following the bowl, so you might want to set up camp there.

For Liberty Bowl fans remaining in town tonight for New Year’s Eve, Bardog and Max’s are two places to consider if you want to avoid amateurs, overpriced drinks, and expensive cover charges. Don’t get me wrong, those places will be packed to the gills, but you will have the minimum amount of BS associated with Amateur Night at those places.

For those with kids, Trolley Stop Market at 704 Madison is hosting a New Year’s Eve party just for kids tonight. There will be pizza specials, kids crafts, kids movies, dancing, sweet treats, and a balloon drop at 8:30pm. They are asking people to make reservations. 901-526-1361 or trolleystopmarket.com.

Add Brass Door to the list of places open daytime on New Year’s Day. Day drinking with Dave and Seamus commences at 10 AM. For those from out of town, Brass Door is a fine little Irish bar across Madison from the First Tennessee Bank building.

Orange for the orange: The University of Tennessee marching band will perform at President Cheeto’s inauguration. I thought my respect level for UT had already hit the bottom of the barrel. I guess I’m drilling into the earth’s core underneath the barrel now (no doubt Rex Tillerson will be pleased to hear about the drilling). For those of you not on Twitter, the cheeto commented that he knew Vladimir Putin was a very smart man yesterday.

(Edited to add: Memphis 70, South Carolina 54 in NCAA men’s basketball. Well, at least there’s ONE team in this state capable of beating South Carolina. I guess this disqualifies the Tigers from becoming Life Champions of basketball though.)

Well, this is pretty cool: If you have an Amaazon Echo, it can now read cooking instructions to you through a partnership with the AllRecipes website.

From Gizmodo: Why trolls won in 2016. Facebook, Twitter, and other social media channels went down the crapper this year. Don’tcha just hate those crazy trolls?

I want to give a shout-out to my friends the Pirtles for another excellent meal. I had to make an impromptu trip to the car dealership to extend my drive-out tags for another month. On the way back to work, I stopped at the Jack Pirtle’s Chicken on Elvis Presley and got a livers and rice with gravy bowl. That was a Pirtle’s menu item I had never had before and it is excellent. If you don’t like livers they have a chicken and rice bowl as well. Many people don’t realize this, but Pirtle’s is locally, family-owned restaurant chain by people who are a vibrant part of the Memphis community.

I have plans for avoiding the amateurs tonight, but I am not going to list them here. I will say that I will be at Bardog at 11 as usual, then over to the Blind Bear as usual around 1. Not much has changed since 2014.