No post yesterday, but I’ve got a double helping of news this morning.

Miss Cordelia’s has announced that they are looking for local bands and musicians. They need people to play live music Mondays and Wednesdays from 5 to 8. Come by the store and ask for Eric, Emily, or Angelina if you’re interested.

Eric Hughes brings the blues to you this Saturday night at The Dirty Crow Inn. He will play from 9 to midnight.

CityCurrent has a good article about Bedrock Eats & Sweets market and cafe, which has started preparing foods that meet Whole30 guidelines. You can eat at the cafe at South Main and Vance, or pick up something from the grab & go to take home.

Useful: There’s now a Google Chrome extension that will filter the politics from your Facebook news feed. 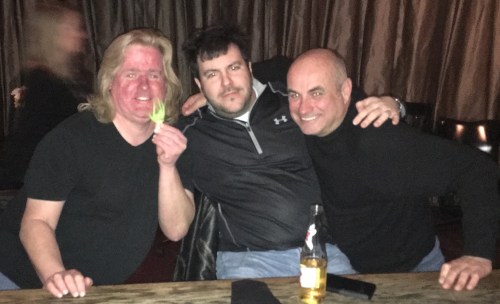 Moody Ques news: My Deputy Director of Public Relations and I had a marketing meeting with Buddha and Ian Sunday night. It was very productive. By “productive” I mean “we drank all the Blind Bear’s Fireball.”

Want to score a bag of weed? Order your fries extra crispy at the Burger King in Epping, New Hampshire.

@kerry901 passed along three ways to resist and engage in Memphis this week. This first is tonight, at the Ghost River taproom, where there will be a fundraiser for Chattanooga mayor Andy Berke.

Thirdly, Clayborn Temple has been named the location for Memphis We Belong Here at 5 PM Wednesday. This is a protest against Trump’s recent immigration order.

Jerry Lawler’s Grill on Beale Street posted photos of their Royal Rumble watch party. I had never thought about it before, but that would be the perfect place for wrestling fans to watch pay-per-views.

Club Paradise where legends like B.B. King played 50 years ago, at 645 E. Georgia, has reopened as the Paradise Entertainment Center.

Do you eat at the Taco Bell on Union in Midtown? 39 years ago, The Sex Pistols performed at a ballroom at that location. Johnny Rotten blew his nose on stage without a handkerchief. Read about it in High Ground News Unmarked series.

Oh my! Ron Garrison, who seemed to be the first competent leader MATA has had in ages, has stepped down from his position following an arrest over the weekend for patronizing prostitution. It was part of a human trafficking sting and two juveniles were rescued. The prostitute Garrison allegedly patronized, however, was of age. His departure comes at a bad time as MATA pushes for more public funding.

Holly has a guide to Super Bowl 51 for Memphians. She has a list of places to watch the game, where to get wings, which places deliver, and more.

Lifehacker has an article on how many people need to come to your party to make it worthwhile to get a keg. If the average guest drinks four 12-ounce cups of beer, you will need about 40 people to kill the keg. Keep in mind when throwing a party Downtown that the people who live here are not “average” in terms of beer consumption so 15 people is probably a more reasonable estimate than 40.

The Memphis Flyer has photos and winners from Soup Sunday. Congratulations to several Downtown businesses who made it into the winners’ circle: eighty3 for Best Gumbo, the Peabody for Best Bread (cornbread), Tuscany Italian Eatery for VIP Best Presentation and VIP Soup (tomato bisque), and Rizzo’s for VIP Dessert (blueberry white chocolate bread pudding).

Loflin Yard will have The Big Game on The Big Screen Sunday. It will be preceded by live music from Electric Church (2-4) and football trivia by Cerrito Trivia.

Gotta love it that the Saucer is having a “Superb Owl” party on Sunday. Wonder if it’s the same owl who was attacking people in the High Point neighborhood several years ago and who has its own Twitter account.

When I took the extra time off after my mom died I decided that Tuesday would be a play day, so out I go. Back tomorrow (hopefully) with more news.