Today is Soup Sunday at FedExForum from 11 to 2, a fundraiser for Youth Villages. I’ll share a little insider information I have learned: Bardog Tavern, the only back-to-back winner of the people’s choice vote for best soup, has retired the Chicken Velvet soup that put them in the winner’s circle in 2015 and 2016. The only way chef John Haley would retire that soup is if he had something that he thought was even better. If I were you, I would seek out Bardog’s booth immediately upon arrival at FedExForum. Gates open at 11, and remember what I said previously: This is not an event where you want to pre-game at a bar and then arrive an hour after it gets started. The best soups will run out well before 2, and really, well before 1 even, and while they may not run out before noon that is when the lines will be the longest.

I’ll give ya another Bardog insider tip, this one not concerning Soup Sunday. Lately on Sunday nights, they have been running dinner specials that include a glass of wine. A few weeks ago, I was in there, and got a special including their spaghetti with Aldo’s grandmother’s meatballs, a salad, and a glass of Cabernet for $16.99. That is a very good value! 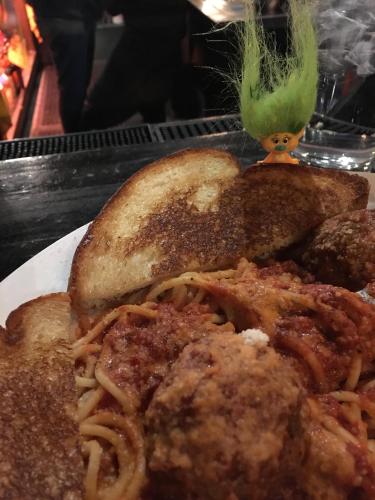 I am not certain they will have a wine special tonight, but they’ve been running them the past few weeks.

With football season (except for one game) being over, Max’s Sports Bar has reverted to its normal opening time of 4:30 in the afternoon. However, this year they are making an exception one day. Saturday will retain a permanent opening time of 11 AM. I think that’s a good call and I will probably get down there at least one Saturday morning next month to watch some college basketball.

Choose901 has an important post on how to get involved with refugees in Memphis. This is great information for those who feel that our president does not speak for them on the topic of immigration. By the way, just yesterday I heard a story of a naturalized U.S. citizen, a business owner who has lived here for 20 years, who went to see his family in Eastern Europe and was refused to be let back into the United States. A CITIZEN!!! I have a few readers who are naturalized U.S. citizens who were born in foreign countries. I would advise you to stay here until 2020 or Trump’s impeachment, whichever comes first.

If you come Downtown for Soup Sunday and want stay longer, Jeremy Stanfill takes the stage at Loflin Yard at 2.

Teen retailer Wet Seal has shuttered all its locations. One former teen shopper’s eulogy: “It made me feel like a piece of ham in a tube top.” Mmmm, that eulogy is making me anticipate BBQ Fest!

The Peabody will be offering two Valentine’s dinner options. On the 10th, 11th, and 14th, Chez Philippe will offer a sumptuous 4-course dinner for $95 per person, or $130 per person with wine pairings by the Peabody Sommelier. On the 10th through the 14th, Capriccio Grill will offer a 3-course Italian dinner featuring lobster or surf and turf for $70.

Interesting… oddsmakers are putting out odds on who will win the Royal Rumble tonight, WWE’s annual 30-person over-the-top battle royal with the winner receiving a shot at the Universal or World championship at WrestleMania. President Trump is 1000/1 to be a surprise entrant and win the Rumble.

The Illusionists – Live from Broadway, described as “Magic’s Cirque de Soleil,” come to the Orpheum February 10-12. These talented artists have sold out shows worldwide.

I’m charging up my phone and my external charger, so I can watch the Royal Rumble on the WWE Network tonight. I always seem to be a popular person to sit next to on PPV nights. Since bars are loud I turn on the captioning. I have a lot to do tomorrow, but I don’t have any set start time, so I may stay out a little late tonight. As for this morning, I will be leading off at D-RANKS with B-RAD at the Blind Bear at 11 as usual.