The Moody Ques’ Deputy Director of Public Relations had a big day yesterday. 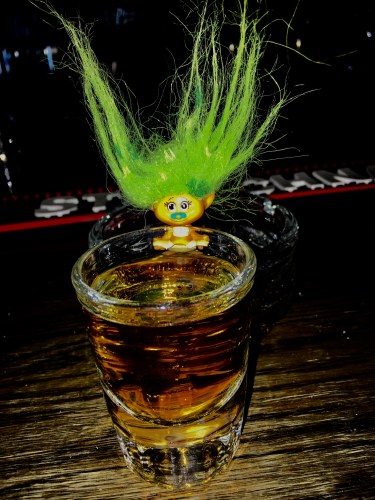 I led off at Bardog yesterday, informing Bloom that it would be a very short stay because I had a BBQ team board meeting at noon. The guy two seats down from me asked, “Paul, where’s your troll?” She was still in my coat pocket at that point and I got her out. We started talking and I mentioned I was about to go to the meeting. “Do you have any open spots?” he asked. “My wife and I were thinking about joining a team this year.”

“We do and we’d love to have you,” I replied. An hour later he showed up at the Silly Goose with $500 cash for a couples’ membership. And the whole conversation started because of my troll. Congratulations to Deputy Director Perjorie T. Roll on her outstanding recruitment effort yesterday! 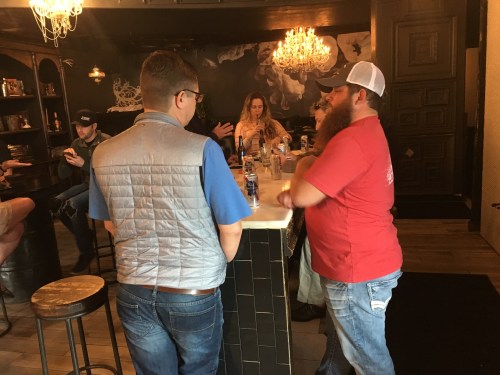 New member Jeremy (on the right) talking with Pitmaster Frank. Jeremy had some cooking ideas to share. Welcome Jeremy and Jeana to the Moody Ques!

We convened the meeting a little after 12 and got down to business. 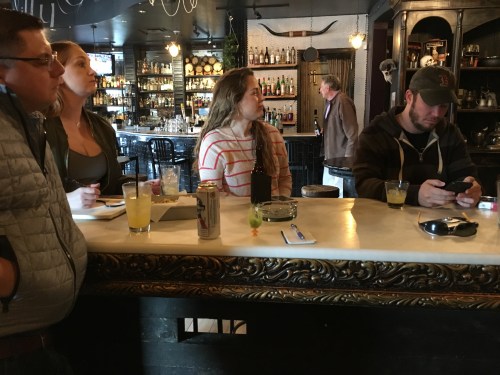 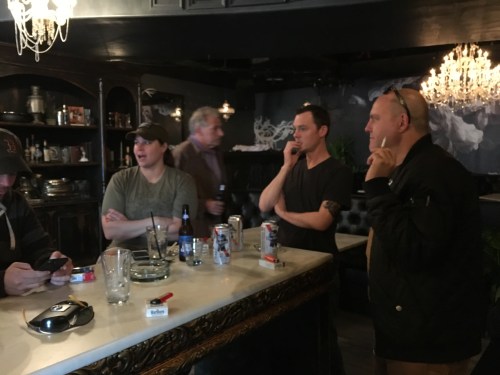 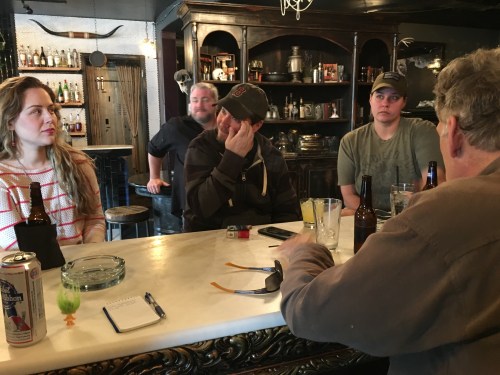 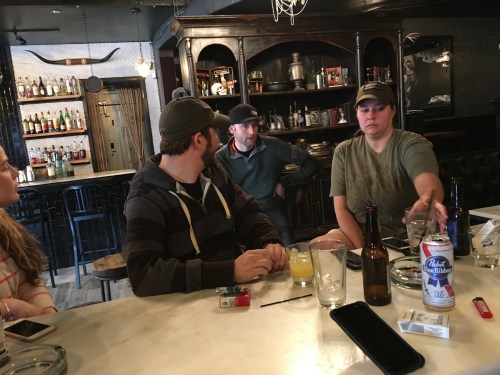 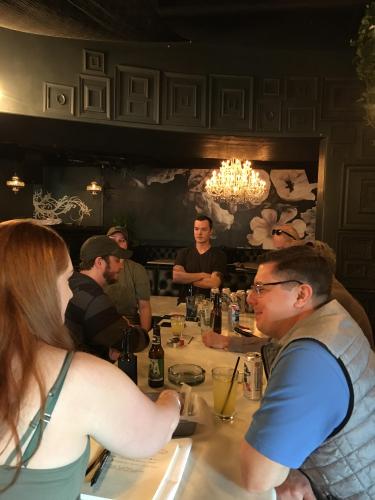 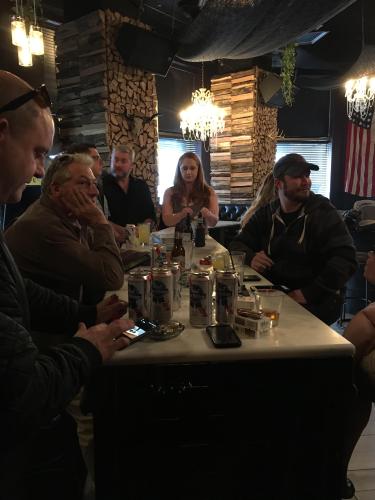 We slightly reconfigured the board of directors this year, bringing on John D as vice president. That will allow Erik to focus on things in the kitchen without having to worry about front of house too. Here’s the list of directors for this year:

Although, as president Clay pointed out, these are just titles. We all help each other out.

Adding Chad as bar manager is a huge plus for the team. Chad will be entirely in charge of the bar. He will order liquor, he will have the power to hire bartenders, whatever he feels he needs to do. His leadership frees up the rest of the team to focus on other aspects of BBQ Fest. Of course, he can count on all of us if he asks for help.

We are going to have a margarita machine behind the bar this year. Thanks to John D for making that acquisition.

We are pleased to have Holliday Flowers back with us for 2017. Their creativity and their resources have been key to our past finishes in Best Booth.

We are still looking at doing Atoka BBQ Fest March 31-April 1 and Southaven Springfest April 28-29. We discussed doing the Southern Hot Wing Festival instead of Southaven, but that isn’t a BBQ competition and the cover charge for the public is ridiculously high.

A third festival, Esperanza Bonanza in Marion, Arkansas, was discussed. However, the dates listed on the website are load-in weekend for BBQ Fest. Not quite sure how that will work.

We still plan on wrapping up the BBQ season at the Tate County Fair June 3 and 4.

Sarah Dalesandro, the artist whose ideas led to our 2014 Best Booth victory, is back to contribute her creativity to the team this year. She, Brent from Holliday Flowers, and president Clay are forming a subcommittee that will talk regularly about booth design ideas. Several ideas were presented yesterday to honor this year’s Memphis in May country, Colombia.

We need to have a full team meeting in March or April. This is important because we need ideas from as many people as possible. Also, it is nice for team members, especially new ones, to get to know to each other prior to BBQ Fest, when everyone is running around working on various things. This date is not set in stone yet, so watch for updates, but I suggested to Brent that we do it at the Holliday Flowers warehouse in The Edge on Saturday, March 25. There will be a jalapeno popper festival next door at High Cotton that day. Admission is free. I can see several advantages to that date and location for a full team meeting:

Again, this not set in stone. Brent has to check his calendar to see if he has events at the warehouse that day. By the way, not many people know it, but the Holliday Flowers warehouse on Monroe has a beautiful event area that is great for business events, wedding receptions, etc. Check them out if you are looking to plan an event.

My troll asked if there was a Best Troll competition and suggested we enter it. I told her there was no such thing and, given who some of the other BBQ teams hang out with, I’m not sure we would win anyway. Then my troll complained that she didn’t like her Deputy Director of Public Relations title because she thought people might confuse her with Barney Fife.

At that point I decided the troll would spend the rest of the meeting in my coat pocket.

After the meeting I wandered down to my “home away from home on the south side,” Max’s Sports Bar, then caught an Uber back to the Blind Bear. I had their famous chili mac. 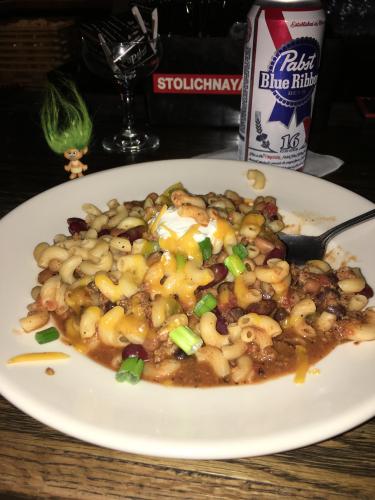 It’s the Blind Bear’s pepper jack mac & cheese combined with Colin’s award-winning three-bean turkey chili, topped with shredded cheese, onions, and sour cream. If I ever wind up on death row I may order this as my last meal.

I don’t have a lot of news to report this Sunday, but if you’re looking for something fun to do and don’t mind driving out east, check out the Tennessee Equality Project gumbo contest at the Hilton this afternoon. Taste some of the best gumbos in the city while supporting equality for all regardless of sexual orientation or identification.

It is going to be a beautiful April-in-February kind of day outside. I am headed out to D-RANKS with B-RAD at the Blind Bear for Sunday brunch. After that, I will see where the day takes me. Back tomorrow with more news.