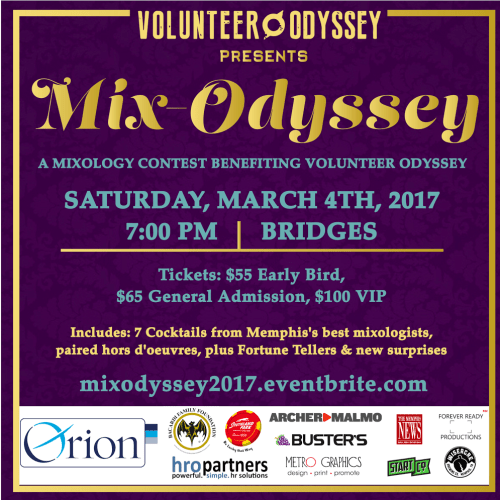 Details have been announced for Mix-Odyssey, where you can sample some of the best cocktails in Memphis while supporting Volunteer Odyssey. It will happen Saturday, March 4 from 7 to 10 PM at BRIDGES. Seven of the city’s top mixologists will compete to see who makes the best cocktails. Each ticket ($65 regular, $100 VIP) comes with a token to vote for which cocktail you liked best.

There will be more than just cocktails at the event, though. There will be hors d’oeuvres, Wiseacre beer, and a selfie station. Fortune tellers will predict where you will volunteer. DJ Justin Baker of the Memphis Grizzlies will supply the tunes. VIPs will have their own area with servers. Early bird tickets are on sale now for $55. This event always sells out and tickets will not be available at the door.

Two Saturdays ago, Max’s Sports Bar held a crawfish boil that was a smashing success. The weather was beautiful, the crawfish spicy, the beer cold. The only thing wrong with it was that SO damn many people showed up. When I finished a beer while outside with friends, I knew I would have to push my way through the crowd to get to the bar, and then it would take 10 minutes to get another beer. Also, although it was supposed to be an all-afternoon event, the crawfish were in such demand that they were sold out not long after 2 PM.

Well, the crawfish are back at Max’s this Saturday, and Max is taking steps to address the issues that came up at the last boil. This time he’s ordering twice as much food, which should extend the sale of crawfish later into the afternoon and give people who are really hungry time to go back for seconds. In addition, they will have a cash bar on the patio, so if you’re taking in the nice weather you won’t have to go back inside to get another beer. Awesome plan to keep your customers happy, Max! 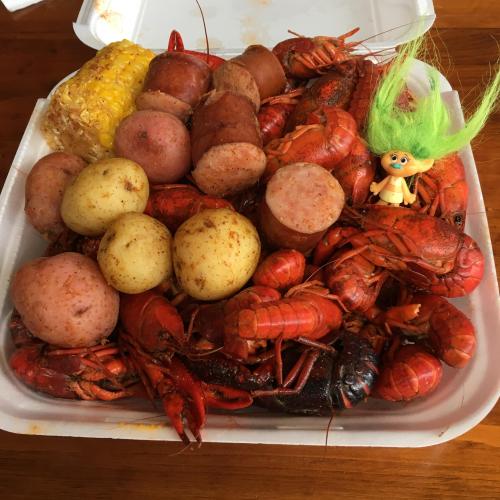 How much are the crawfish, you ask? You get a styrofoam box holding about 2.5 to 3 pounds for $10. Each box also comes with smoked sausage, taters, and corn. Sorry, troll not included in the purchase price.

The Memphis Flyer and Aldo’s Pizza Pies will do a Memphis Beer Bracket starting this Wednesday, February 22, through next Tuesday, August 28. Vote for your favorite Ghost River, High Cotton, Memphis Made, and Wiseacre beers. More details to come.

High Cotton is adding something new to its lineup of events: A monthly book club. It’s open to everyone who enjoys a brew and a good book. The first book, to be discussed Sunday, March 12, is Summer Sisters by Judy Blume. They are asking those who are interested to email taproom@highcottonbrewing.com to RSVP and to get more information. Here’s the Facebook listing for the March 12 book event.

Good article: Why Memphis is every music nerd’s dream

That’s it for now. I’ll probably be back at lunchtime with another post.