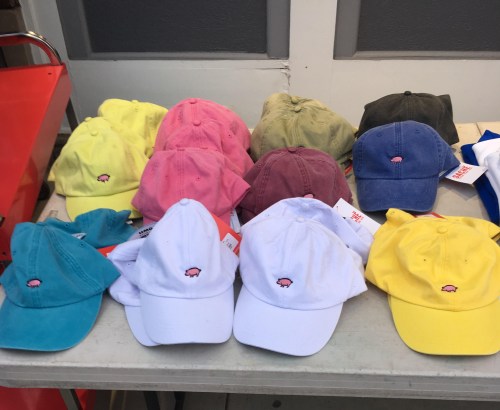 While he had his clothing store on Main Street, Tom Shelton launched a line of clothing called Pink Pig Apparel. Having seen the Izod alligator and the Polo by Ralph Lauren horse, Tom wanted to create a line of clothing that was nice enough to wear to work or business casual events, but which kept you true to your Memphis roots. So the Pig was born. Tom started off with polos and expanded the line to hats. dress shirts, T-shirts, fleece zip-ups and more Pink Pig logo items.

When Shelton Clothiers closed, the Pig didn’t die. It lived on at Life Is Good in the Peabody Place office tower. Now that Life Is Good is no more (does that mean Life Isn’t Good now?), the Pig has taken up residence at Sache at 525 S. Main. Yep, you can buy a “Take That For Data” shirt and a Pink Pig hat all in one convenient location.

Last night, we had a mini-BBQ team meeting at the Silly Goose, with team president Clay, vice-president John D, treasurer Misty, me, and Deputy Director of Public Relations Perjorie T. Roll. Post-meeting Perjorie and I headed south to South Main Trolley Night. “Do me a favor,” said Misty. “Take a picture of the Pink Pig hats and text it to me. I’ll tell you what color I want and I’ll pay you back. We can use PayPal, Venmo or whatever to get you the money.”

“Or, you could just give me the money the next time you see me, when I give you the hat,” I replied.

I went down to Sache and found the Pig on a table outside. Tom and his lovely wife Christine were there. I told them my shopping assignment and they let me snap a photo of the hats. “Yellow one in the front,” Misty texted back.

As of yet they only have hats and polos at Sache. I told Christine I would be very interested in seeing Pink Pig T-shirts there. I don’t have to wear a shirt with a collar to work, so I wear the same clothes at work that I do at home most of the time. For the past several years I have been running across the street from work to Target any time I needed a new shirt. I would much rather wear the Pig.

I hope they bring the fleeces back in the winter. I bought two zip-up fleeces about six years ago and they are perfect with a pair of shorts when it’s about 55-60 outside. They are second only to my PBR hoodie in terms of favorite clothing.

After shopping, it was time for a visit to Earnestine & Hazel’s. Perjorie T. Roll guarded Misty’s hat while I ordered a beer. 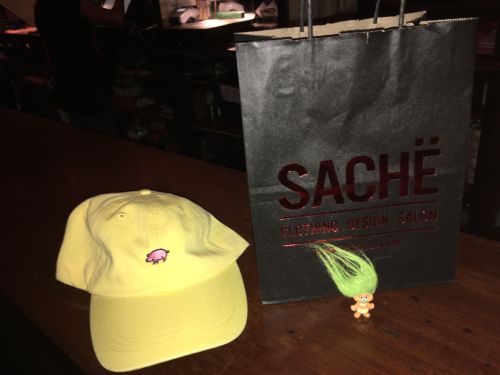 On to the news. There will be a night of pole dancing and acrobatics tonight at the Rumba Room. Community jam session 6-8 PM and then the show from 8 to 9.

Gannett is holding back severance pay to the Commercial Appeal employees they let go earlier this month because of a petty squabble with the newspaper union that has nothing to do with the employees in question. They also made all their advertising staff re-apply for their jobs. I encourage all of you to call Mike Jung, interim publisher, at 239-335-0277 and tell him what you think about this.

The Bluff City Backsliders take the stage at the Dirty Crow Inn tonight at 9.

It’s ’90s Night at the Redbirds. Mr. Belding from Saved By The Bell will be there, Roxi Love will perform ’90s hits before the game, and of course it’s fireworks night. 6:35 first pitch.

Full day ahead. I will lead off at the Memphis Farmers Market, then over to Clarence’s bar at Earnestine & Hazel’s, then down to Max’s Sports Bar for their crawfish boil. After that the next stop will be Floyd Alley between Fourth and Danny Thomas for The Edge Gets Lit alley party. Eight bands, fun and games, a dog olympics, Jamaican food and more! Of course, I could probably talked into wandering down the street to the High Cotton taproom for a beer while I’m in the neighborhood, if anyone is interested! That’s it for now, back tomorrow with more news and probably some alley party photos.