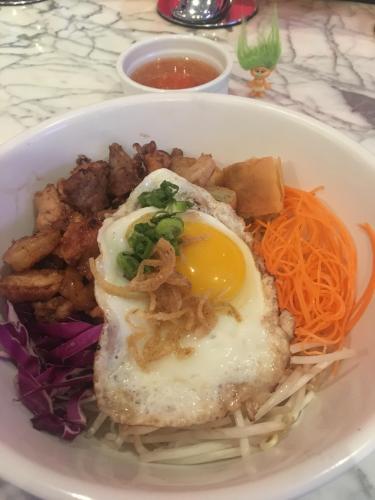 I rewarded myself after a fruitful week job hunting, including an interview at a company multiple people have told me is a wonderful place to work, with dinner at Oshi Asian Kitchen yesterday. Having had sushi the past few times there, I decided to explore the main menu.

The Vermicelli Bowl, I suppose, could be called a cousin to their pho and ramen dishes. It has a base of vermicelli topped with shredded carrots, purple cabbage, chicken, beef, shrimp, miniature spring rolls, and an egg. It comes with a side of fish sauce. “Should I pour the fish sauce over the bowl?” I asked, not familiar with this dish.

“The fish sauce is spicy,” they advised me. “Pouring it in the bowl might make the bowl too spicy to eat. We recommend you dip your food in the fish sauce.” Having made the mistake of putting too many jalapenos in my pho on a previous visit, torching my tongue in the process, I decided it was best to heed the advice. They brought me both a fork and chopsticks and I used chopsticks to dip the meats in the fish sauce.

Very filling and there was no shortage of meat in the bowl. The mini spring rolls and the fish sauce were nice complements. A delicious dinner and one that I would recommend next time you come to Oshi.

I talked to sushi chef Minh a bit, and he told me there will be karaoke tonight at Oshi from 8 to 11. Also, he said he was thinking about doing an all you can eat sushi night on Monday. Call the restaurant to confirm this, but he told me he was thinking $25 for the basic rolls or $30 for the deluxe rolls.

Couple of good live music gigs on the south side tonight: Chris Hill plays The Vault, and Eric Hughes plays Dirty Crow Inn. If you’re more into the classical stuff, MSO will be at the Cannon Center performing Tchaikovsky’s Fifth.

In case you missed the news: Special Counsel Muller’s team handed down 13 indictments against Russian trolls who used social media to influence the 2016 U.S. presidential election, and three Russian businesses as well. Sources I follow on Twitter indicate that this is an opening shot and a lot more dominoes are going to start falling rapidly. Also, Paul Manafort’s right-hand man Rick Gates has flipped and is singing to Mueller like a canary, which has resulted in a new charge of bank fraud against Manafort.

That’s it for now. Blog posts may be sparse in the next week as my job hunting efforts kick into overdrive.