Yesterday was National Margarita Day. I celebrated with some excellent margaritas at two of my favorite spots. 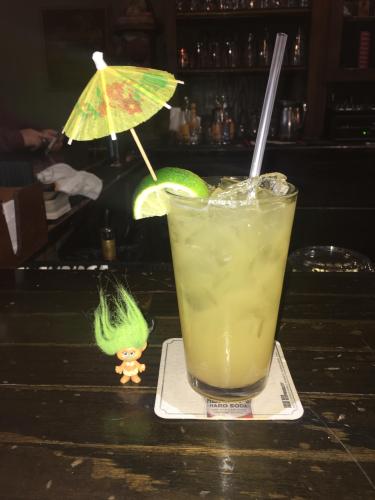 First up was Bardog, where I enjoyed catching up with two of my neighbors from my apartment building. With rain in the forecast, my troll was grateful that an umbrella came with Bardog’s margarita. After that I stopped by Silly Goose for their version of the Mexican cocktail.

Tonight is South Main Trolley Night, with restaurants and shops open until 9 PM or later so you can mingle with your neighbors. SMA members, there will be a table set up at the 409 South Main food hall and The Civil Pour will have drink specials for you and Megan Carolan will be performing. There will also be live music at South Main Sounds, The Vault, Earnestine & Hazel’s, The Dirty Crow Inn, and The Arcade.

Memphis Made Brewing Co. is releasing three new high-gravity beers, to be sold in 4-packs in locations around Shelby County. They are named The Kickdown, Slumber Party and Mr. Anderson and have ABVs of 9 to 9.2 percent.

Make sure you read the Memphis Flyer’s cover story this week. It’s an important one! It’s about cheese dip.

The CA has a First Bites look at Maciel’s new location on Highland. If you haven’t been yet, put it high up on your to-do list.

Enivronmental Court Judge Potter plans to retire soon. Thank you for your many years of service to our city, Judge. Memphis is a better place because of your efforts.

A new cocktail club called Tailor’s Union is coming by April at 115 Union. With 117 Prime steakhouse opening next door and Belle Tavern going strong in the back, business is soon to be booming on that block of Union.

The Flyer’s Meghan Stuthard has a great article about Memphis Sounds Lounge, on Third in the Econo Lodge building until recently. It has found a new home on Mud Island.

If you haven’t been to Carolina Watershed yet, this StyleBlueprint article will give you an idea what to expect.

LeBron comes to town as the Grizzlies host the Cleveland Cavaliers tonight at 7.

The performances of Guess Who Showed Up at Dinner tonight and tomorrow at the Orpheum have been canceled. Tickets will be refunded at point of purchase.

Rick Gates, Paul Manafort’s right-hand man, is expected to plead guilty to a number of charges including tax fraud, money laundering, and conspiracy against the United States today. Observers are comparing the way Mueller is running his investigation to the way he rolled up the Gambino crime family (that’s the one that was headed by John Gotti) and I would have to agree, that’s exactly what he’s doing. He’s putting pressure on Manafort until Manafort finally flips and spills everything he knows about Trump’s ties to Russia.

All right. Time to study SQL for an interview I have next week, and then I’ll get out and about.