Happy Good Friday to all of my readers, and to those of you who have the day off work, Happy Better Friday.

Memphis Tigers men’s basketball coach just won me over as a fan big time. Arkansas Online reports that Penny wants to renew the basketball rivalry with Arkansas. The Tigers and Hogs played 12 times between 1991 and 2003, and it was very much a rivalry. Penny wants to bring that back. Excellent, and the sequel to a great story. Larry Finch’s protege (Penny) vs. Nolan Richardson’s protege (Mike Anderson). Let’s make this happen!

Of course, to get Arkansas on the schedule, the Tigers may have to give up heated rivalry games against teams like Mercer, Samford, or Bryant. Whoa, the Tigers may get their strength of schedule into the double digits if Penny is successful booking these SEC opponents.

Loflin Yard will have its two year anniversary party Saturday, April 7. Special brunch with acoustic music in the Coach House at 11, Adult Field Day at 2, live music at 8.

Art Village Gallery will have the opening of its MLK50 tribute exhibit, Beyond the Balcony, tonight from 7 to 9 PM. Seven local, national, and international artists will explore what it means to ascend beyond the past. Refreshments and hors d’oeuvres will be provided.

117 Prime still needs a few cooks, a couple of oyster shuckers, a dishwasher, and a few server assistants.

The CA has five things you need to know about MLK50 parking and security next week. At this time it is unclear if any former presidents will attend.

PreLaw Magazine has rated the University of Memphis Law School as the best facility in the country. This is the second time in four years the school, located Downtown at Front and Madison, has earned the honor.

If you have the MyFitnessPal app, change your password ASAP. It was hacked.

Tankathon has current probabilities of teams getting each pick in the NBA draft lottery. As of this morning they have Memphis at 51.4% to get one of the top three players in the draft.

Morris Glass is hiring a full-time delivery driver. This is a great family-owned company. You need to be okay carefully handling windshield glass weighing 20-45 pounds but no experience is necessary; they are willing to train. Must have a clean driving record, and there is a background check and drug test.

I decided to keep lunch close to the office yesterday, going across Kirby Parkway to Cafe Med, a Mediterranean restaurant in a strip mall just east of Bougie Kroger. They have 18 different kinds of gyros on the menu – 14 steamed, 4 grilled. I decided to stick with the classics and ordered the Original for my first visit. 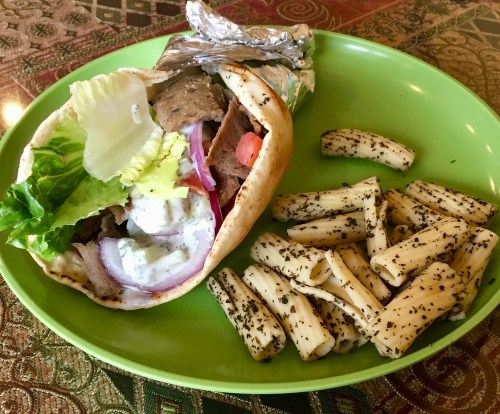 Gyro meat in a pita topped with lettuce, tomato, onion and cucumber sauce. In case the photo doesn’t do it justice, let me make it clear that they HEAPED the meat on this thing. Excellent value – getting lunch at a Germantown restaurant for under $11 is uncommon. Also, I got the sense that the staff truly strives for customer satisfaction in everything they do. I will be back to try other gyros on the menu. The restaurant was not busy when I left around noon, normally peak time for restaurants. There is a better-known Mediterranean restaurant (Petra) half a block away. I hope people won’t overlook Cafe Med as a result.

Now, having said that, I am irritated about one aspect of my lunch experience, and it has nothing to do with Cafe Med. It has to do with me. I violated one of my core beliefs as a Downtowner yesterday at lunch. Looking out my office window, I would estimate Cafe Med to be about 150 feet away. And yet, how did I get there?

I DROVE THE CAR.

It never even occurred to me that I could walk there, and it would in fact be faster to get there than driving. Yes I would have to cross Kirby Parkway on foot, but you know what? I’ve probably crossed Union 10,000 times and have yet to get run over. I think I would make it.

I cannot believe I drove. Germantown is rubbing off on me, and in this case, it’s not a good thing.

This is my second post of the day. Early this morning I did a preview post of the excellent food to be served by the New Wing Order food truck. If you haven’t read it, scroll on down. Back tomorrow with more news.