New Wing Order is a team that competes in Southern Hot Wing Fest here in Memphis. In 2015 and 2017 they were Grand Champions, and in 2016 they came in third. This September their wings and other offerings will be available for the public to purchase, as they roll out their food truck here in Memphis. New Wing Order was kind enough to invite Memphis food writers, bloggers, and social media gurus to an event last night to preview the food truck’s menu. Before the food came out, principal owner Jesse explained how this all happened. Originally from Nashville, he came down to Memphis to watch New Wing Order compete in Wing Fest. He knew he had to be a part of it and before long he added an obsession with wings to his obsessions with cooking and entrepreneurship. He worked his way up through the food truck industry in Nashville to learn the ropes. Now he and the team are ready to get the food truck on the road and start serving the Memphis area. I have said for years that the best restaurants are extensions of their owners’ personalities and that is what we have here. 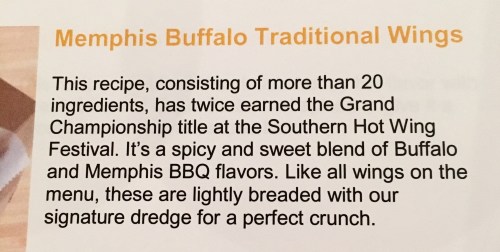 Memphis Buffalo Traditional Wings, the wing that led them to two grand championships. Buffalo sauce with a nod to Memphis BBQ. Good stuff and the heat is there. It’s my belief that if you eat 8 or 10 hot wings your eyes should be watering a bit. These would do it. The Cajun honey hot was the most flavorful in my opinion, although I liked them all. It’s good to have variety. It’s also good that they have a boneless wing (garlic parmesan) that does not depend on heat or sauce. Something for everyone. I don’t know if I have any longtime readers who are vegetarians or big fans of avocado, but if I do, these fried avocado tacos have you in mind. They are vegan friendly. The taco was tasty and had a good mix of flavors, although I would probably stick to the meat options. They NAILED it with the pork verde taco. Having been on a BBQ team for 12 years, I know good pork, and this was the stuff. Slow smoking does wonders. Tender and juicy, the pulled pork soaked in the flavor. The best dish of the night and I made sure the New Wing Order folks knew I felt that way. I know they are a wing team but do not miss out on these tacos. Paul Gagliano of Southern Hot Wing Fest was nice enough to gift each of us with a free ticket to the festival this year. The festival is expanding and moving to Tiger Lane. They gave us a copy of their food truck and catering menus. After the event I showed the menus to a few people at the Blind Bear and it drew oohs and ahhs.

Thanks to New Wing Order for a delicious and informative night. I predict success in their future and look forward to seeing them on the streets of Memphis.