Big news from the Memphis River Parks Partnership yesterday: Tom Lee Park will be getting a makeover at a cost of $45 to $55 million. Lacking hills and trees, the current park is not much of a destination other than during the month of May. This is a long-standing complaint about the park, but it was previously believed that any makeover would spell the end of Memphis in May events at that location. However, Parks Partnership president Carol Coletta has said they are committed to finding a way to make Tom Lee Park the crown jewel of the riverfront while at the same time accommodating Music Fest and BBQ Fest.

They’re supposed to have the work done in under two years. I wonder if that means Music Fest and BBQ Fest will have to move for 2019? I will keep my ears open for more information. BBQ Fest at 2011 in Tiger Lane worked pretty well, although transportation was only convenient because there were a lot of unused hotel shuttles, which wouldn’t be the case this year.

Here’s a second article, this one from the Memphis Daily News, with more information. It’s unclear whether work in the park would stop for the month of May 2019. The work would be completed more quickly if the festivals moved for one year.

In other Memphis River Parks Partnership news, this Saturday they will have People’s Day on the River! From noon to 4 there will be free monorail access to Mud Island, canoe and kayak rentals, riverfront story time, and demonstrations.

The inaugural Memphis Chicken & Beer Festival will happen at the Liberty Bowl Saturday, August 11 from 4 to 8 PM. Tickets are $40 and include a souvenir glass and all beverage samples. Food will be available to purchase. Wait a minute, they’re calling it a chicken & beer festival and your ticket doesn’t even include the chicken??? Live entertainment and a portion of ticket sales will benefit the Dorothy Day House.

Weekly events that happen tonight that I forget to mention but probably should at least once in a while:

There will be wrestling, free to the public to watch, outside Jerry Lawler’s on Beale Friday night, June 15 at 6 PM. “The Terror” Matt Serra, with Dana White in his corner, will take on Derrick King, and “Dinyero” Din Thomas will match up against “Five Starr” Dustin Starr with Maria Starr in his corner. Of course, “The King” will be on hand as well. This will be part of the filming for Dana White’s Lookin’ for a Fight series.

The devil on my shoulder is pushing me to do a “Throwback Thursday” tomorrow… it wouldn’t be a photo but it would be a story involving a photo. :devil:

Max’s Sports Bar now has its new slush, the Banana Hammock, in the machine. I look forward to trying one Friday night on Max’s patio, or inside or out front if that’s where folks choose to congregate.

Last night I stopped by Belle Tavern. I noticed that if you get a Bee’s Knees, $2 of the purchase price is donated to the Bee Conservancy.

For the first time since I’ve been lunching out in East Memphis/Germantown, bad reviews convinced me to cancel a trip to a restaurant. I found a place that served wings with extra-hot sauce, an intermediate level between hot and suicide which is my preferred sauce hotness. I learned to love extra-hot sauce back in the days when I would go to all-you-can-eat wing Mondays with friends at Buffalo’s out on Winchester. Hot is not hot enough and suicide just about kills you. So I planned to go the extra-hot wing place for lunch yesterday, until I noticed the place wasn’t even averaging 3 stars out of 5 on Google Reviews.

Alarmingly, a lot of the more recent reviews were one-star, saying the wings are admittedly good, but the service at the counter is terrible and the employees are rude. That alone wasn’t enough to dissuade me; I was still willing to go there once to see for myself. However, then I saw other reviews saying people didn’t get their wings until 30-40 minutes after ordering. On an hour for lunch, that’s a deal-breaker.

Now hungry for wings, I remembered that when I started the new job, my friend Buddha recommended I go across the street to One & Only BBQ on Kirby… not for the BBQ for which they are famous, but the smoked wings. I had been there once before, not trying the BBQ or the wings, but the smoked kielbasa. Yesterday I decided it was time to give Buddha’s recommendation a try. 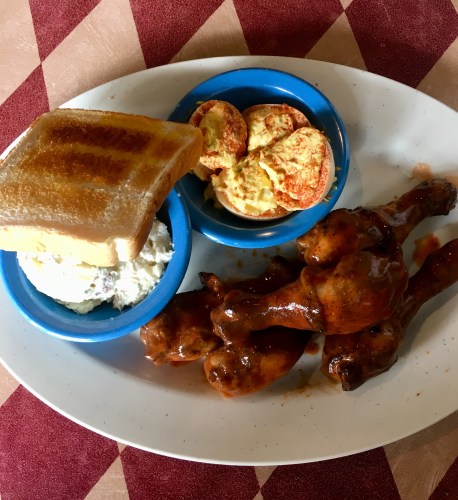 I got the smoked drummies meal: 5 large drummies with choice of sauce, dip, 2 sides and Texas toast. I got the wings Buffalo hot, with blue cheese dip, twice-baked potato salad, and deviled eggs. Although the Buffalo hot sauce was not as hot as the extra-hot sauce I would have had at the other place, the smokiness of the chicken more than made up for it. The flavor of these wings is in the same ballpark as Central BBQ, and for those of you who don’t know, that’s high praise indeed. Sides were good too and the service was great. They asked if I wanted an extra blue cheese and came by several times to make sure I had everything I needed. A pleasure eating lunch there, and now that I’m getting a little bit removed time-wise from BBQ Fest, soon I will go back and taste what One & Only does best.

In the news… Trump’s “fixer” Michael Cohen’s attorneys are not expected to represent him going forward. Without lawyers, Cohen will most likely cooperate with federal prosecutors. This would be horrible for Donald Trump because Cohen knows where the bodies are buried. I mean that in a figurative sense, but I’m not so sure it isn’t literally true as well.