RiverPlay, the recreational pop-up outdoor space with half-court basketball, football and soccer fields, skating, and athletic gear rental, is coming back starting tomorrow, Friday, June 15, at 2 PM. The good news is, this year they’re not closing Riverside Drive to make way for RiverPlay. Rather, it will be at Beale Street Landing in Tom Lee Park. There will be three special Sunset Skate Fridays at the park this summer. Visitors are encouraged to use Explore Bike Share to get to RiverPlay and can use the code RiverPlay18 for a free hour ride that can be used Friday, June 15 or Saturday, June 16.

By the way, how’s Explore Bike Share been doing, now that it’s 3 weeks old? MBJ has the answers. 455 members, nearly 2500 individual users, over 5000 rides, over 23,000 miles collectively ridden. With 455 members, Explore has already hit 40 percent of its annualized projection. Not surprised, because I see people on Explore bikes nearly every time I take a walk Downtown.

Salt/Soy, a new sushi restaurant and raw bar, will make its debut at a pop-up dinner at the South Main Market food hall, 409 S. Main, on June 29. The restaurant will open mid-July. Nick Scott will be chef/owner. He is also chef/owner at Interim and he does a monthly butcher dinner at Alchemy. In addition, in the past Nick was executive chef and later general manager of Asian fusion restaurant Bluefin, back in the days before Bluefin put chicken tenders, gyros and K-Pop Tacos on the menu.

Seeing Red, who played the Peabody’s New Year’s Eve party, returns to play this week’s rooftop party with covers from the ’80s through today. They will be joined by special guest Echosmith of Bright and Cool Kids fame. $15 cover, $30 VIP. Admission gets you not only the live music, but a buffet of catfish nuggets with tartar sauce and warm mini pretzels with honey mustard. VIP has a second buffet of Jack Daniel’s tenderloin with rolls, au jus, and mustard, along with tater tots, sweet corn nuggets, and watermelon wedges.

Today at Ghost River from 3 to 5, meet Lee Asher, founder of Asher House, currently on a cross-country mission to get dogs out of shelters. They travel from state to state, setting up events in conjunction with local humane societies and shelters. They bring adoptable dogs, preferably the ones that have been there the longest, to the events. If a dog is adopted at an event, Asher House pays the adoption fee and provides a month supply of MyOllie dog food.

Wiseacre will have an Ultimate Garden Party Saturday 2-8. It’s $5 to enter, but the entry ticket is redeemable for a pint at the bar. From 4 to 8 Bounty on Broad will be on site, selling a la carte garden party fare. Menu here.

Envision Memphis, the fitness center on the top floor of the Cadre Building (Second and Monroe), has added some new classes including Barre Fit, FUNC Fit, and Spartan Strong. They also do the Pilates in Memphis Park classes every Wednesday at 6 PM.

Panic! at the Disco will make a stop at FedExForum on the second leg of their Pray for the Wicked tour. The concert date is February 6, 2019 and tickets will go on sale Friday, June 22.

If you didn’t get enough wrestling at WWE Smackdown Live on Tuesday, buy a ticket to Wrestling Night at the Redbirds on Friday, July 6. There will be pre- and post-game wrestling matches refereed by legend Jerry Calhoun. The post-game match will feature Jerry “The King” Lawler. The night will be hosted by the Five-Star Couple, Dustin and Maria Starr. There will be autograph sessions in the concourse featuring

There will also be $2 beers in the Plaza before the game and it will be Free Stuff Friday with prizes every inning and one fan rolling the dice for big money. First match at 5:45, gates at 7, first pitch 7:05.

High Ground News has a good article on the redevelopment of the old Russell Hardware building at 316 South Main. Listed as a blighted property last year by the South Main Association, the renovation is one of a series of rehabs in a partnership between Bill McCrary and his company DDEHC and The Church of God In Christ.

Yesterday was my turn to provide a pie for Pie Wednesday at work. My pie partner was out on vacation, though, so I had to provide two pies. I had a good experience with a blueberry pie from Miss Muff’n bakery last time around, so I went back to their website and viewed their list of 15 pies. I chose a fudge pie and a banana cream pie. Don’t judge the pies by the fact that the pie slices look a little jumbled. We have 12 people in the pie club, so we cut the pie into 12 slices rather than the standard 8. It’s hard not to discombobulate a pie when you’re cutting it into 12 slices.

I got a surprise when I went to pick the pies up. The owner saw my name and remembered that I had blogged about Miss Muff’n the last time it was my turn to bring pie. She gave me two strawberry cupcakes to try. They have strawberries and cream inside. 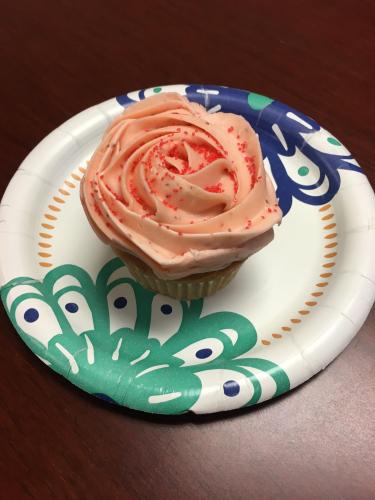 The lady at the counter was very nice, and offered to help me carry my goods to the car. A second positive experience and I will be back for future pie orders.

The date was two years ago minus two days, Thursday, June 16, 2016. I was at happy hour at the Silly Goose where my friend Jessica bartends. Another of the Thursday happy hour regulars was sitting about six seats down the bar from me. He said to one of his buddies, “Let me show you this pic this girl sent me,” and he pulled it up on his phone. I was too far away to see who the girl was or what was in the pic, but based on the WHOA look on the friend’s face it was almost certainly a sexy pic, most likely intended for the recipient’s eyes only.

Man… whoever that woman was, I bet she’d be MORTIFIED if she knew the recipient was showing the photo to his buddies. What a total lack of respect for her privacy. Wonder how many other guys he showed it to.

Oh well, like Russell used to say on Fat Albert, some people are like a school on Saturday. No class.

A week that looks like it will end with a bang

One of my favorite writers, Dr. Dena Grayson, has an update on what is going on with Trump’s “fixer,” Michael Cohen. Tomorrow is the deadline to turn all seized evidence over to prosecutors that hasn’t been found to be protected by attorney-client privilege.

But that’s not all happening tomorrow… Paul Manafort is back in court to determine if his bail will be revoked given new evidence that he tampered with witnesses.

And just this morning, the New York attorney general filed suit against Trump, Don Jr., Ivanka, and Eric claiming the Trump Foundation has operated illegally as a charity for more than a decade. The lawsuit is a civil matter, but criminal charges could result. Happy 72nd birthday, Donald!

Considering Trump is president, is rooting for Russia in the World Cup the patriotic thing to do?

That’s all I got. Going to hit some different spots this evening. Back tomorrow with more news.