Yesterday I was in Bardog Tavern and someone requested a sponsor packet to learn about ways to support the Breakaway-Bardog 5K and the Monroe Avenue Festival (to old-schoolers, “the Bardog alley party”) on Sunday, August 19. I figured I’d post that information here. First of all, there are sponsor packages at the main event level ($6000), the contributing level ($2000), and the supporting level ($750). Each of these levels gets you plenty of recognition for your organization as well as perks.

If you don’t have an organization, but as an individual you want to support this great cause – having raised over $200,000 for the kids of St. Jude since 2009 – there are ways you can do that, too. You can donate money. You can donate an item to be given away in the raffle at Monroe Fest. You can organize a fundraising team. Or, you can be a volunteer. Lots of ways to get involved.

While at Bardog, two guys came in with flyers for Bowling for Balls, an event on August 26 at Billy Hardwick Lanes. You can help fight testicular cancer, or as they would say Save Deez Nuts, by entering a team of 4. In addition to an afternoon of bowling, you get Memphis Made beer, pizza, soft drinks, and prize giveaways from local establishments – including Bardog, which donated some gift cards. 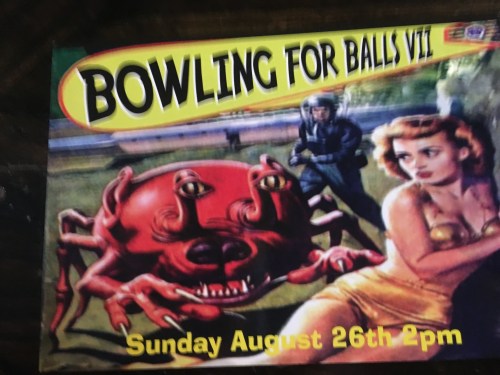 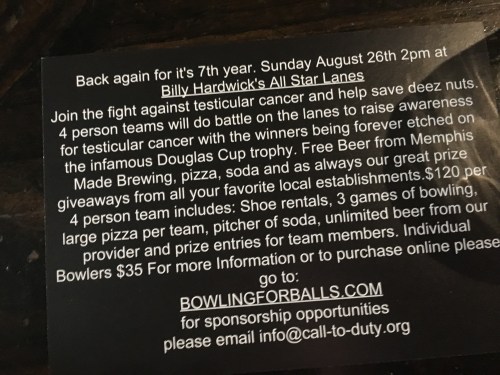 Later in the day I visited Silly Goose for happy hour. I tried their Turkey Burger last Friday and it was really good, so this time I decided to have their Classic Burger with beef patty. 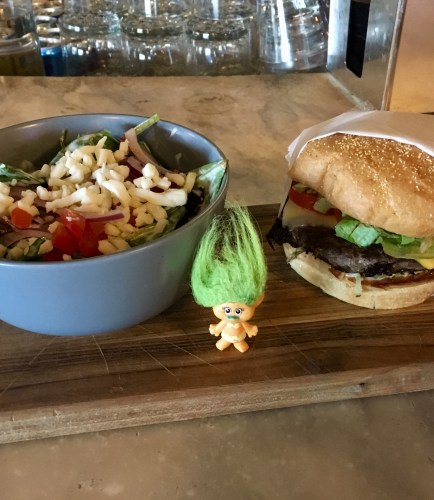 This is just a good old homestyle burger at a very reasonable price. It comes with a salad you can get with ranch or vinaigrette. I like it that the salad comes with a generous amount of cheese.

I had a conversation that turned weird while I was at the Goose. Someone came up and inquired about my little troll figurine who stands on the bar in front of me. “What’s his name?” this person asked. I explained that the troll is a female and is named Perjorie T. Roll.

“Well, can I buy Perjorie a beer?” he asked.

“Sure. She drinks PBR,” I replied.

So, he and I chatted for a couple of minutes, then he asked, “Can I borrow Perjorie for a while?” NO! She’s not a library book! What a strange thing to ask.

There’s a photo from Beale Street that has been going viral on Facebook. It’s a sign from Rum Boogie Cafe, informing patrons that a $4 entertainment fee will be added to their check after 7 PM. This money does not go to the band, but the sign gives the impression that it does, especially since it has “SUPPORT THE BLUES” in big, bold letters. It makes customers a lot less likely to tip the band, believing that they’ve already given the band some of their money. Sounds like Rum Boogie needs to clarify what happens to that entertainment fee.

Downtown’s National Night Out celebration comes to Court Square this year, on Tuesday, August 7 at 6 PM. This is a chance to thank a police officer or firefighter for keeping us safe, and a chance to learn how police-community partnerships can strengthen neighborhoods. There will be a DJ and free food and this is a kid-friendly event. PRO TIP: Some of the best Downtown restaurants donate to NNO, so get there right at 6 to get first pick at the food.

Court Square was covered in “snow” for the filming of a movie yesterday. Film crews will be out today and tomorrow as well.

Gary Parrish of CBS Sports writes how Penny Hardaway and Mike Miller became the most fascinating recruiting team on the college circuit.

That’s all I got for now. Back tomorrow with more news.