I’ve now confirmed from a former Purple Haze employee that the place is closed for good. The former employee told me, after two employees got injured after last weekend’s fight/shooting, Charlie who ran the place reportedly said “I’m over it” and shut it down. In related news, a suspect has been identified in the shooting.

Walking Pants Curiosities is holding a Sunday in September Sip Shop-a-Jam this Sunday from noon to 4. Grab your favorite musical instrument and come jam out.

Memphis River Parks Partnership is hiring for two very good positions. If you love the riverfront and want to be a part of its redevelopment, this is your chance. The positions are

If interested, apply with a resume and cover letter to info@memphisriverparks.org.

Memphis Made Brewing Co. is working with Memphis Music Export on a project. Memphis Music Export, whose goal is to make people in other cities in the region aware of great Memphis music, has sent a couple of artists to Americana Fest in Nashville this weekend. Specially-labeled Memphis Made Americana Junt will be served at the Pure Memphis Happy Hour at the festival tonight from 5 to 8. Some of the musicians will have a return date at the Memphis Made taproom on October 6, and six-packs of Americana Junt will be available for sale during that time.

I tried another one of the $6 lunch specials at Pontotoc Lounge yesterday. 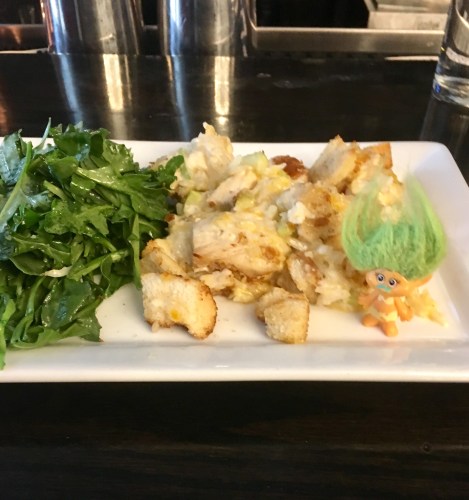 Chicken casserole is the Wednesday special. It comes with a side of fruit or salad. Pontotoc’s famous Mississippi Pot Roast is the $6 special today.

I heard something about the River Rat Rounders that makes their games my recommended games for those who are looking to get into the bar poker scene: They expect players to play real poker there. If you make a bunch of crazy moves that reduce the game from a game of skill to a game mostly of luck, you will be pulled aside and told that if you keep doing that, you will be asked to leave.

For those who have never played, let me give an example. Say it’s the first hand of the game with small blind 25/big blind 50, and I have 4000 chips. That’s 80 big blinds, allowing me plenty of room to place strategic bets to try and elicit information about my opponent’s hands. I look at my cards and decide to raise to 150, three times the big blind. If I have a starting hand like A♠Q♦, that raise is saying, “I have a big hand.” If I have a hand like 6♥5♥ that isn’t a very good hand but could turn into one if the right community cards are dealt, the raise is saying, “I want you to believe I have a big hand.” In either case, I still have 3850 left in my stack, plenty to respond to re-raises and play the flop, turn, and river properly.

When the flop (the first three community cards) come out, I have options. If one of the cards in my A♠Q♦ pairs up, I want to bet a little over half the size of the pot, because I probably have the best hand and I want to build the pot. I also bet here because I want to see if anyone re-raises me, possibly giving me information that my top pair might not be good and I need to be careful. On the other hand, if I have a speculative hand like 6♥5♥ and it doesn’t connect with the flop, I can bet a little over half the pot here anyway, because I represented in the first round of betting that I had a big hand. I’ve built the credibility to bluff and possibly take down the pot right then and there.

On the turn (the fourth community card) and the river (the fifth community card), I have two more opportunities to bet and gain additional information about my opponents’ hands, and because I had a large starting stack relative to the size of the big blind, I have the chips to size my bets properly. The turn in particular is considered the most important betting round of Texas Hold’em when played with skill, the card on which you decide if you want to go all the way with the hand or fold to cut your losses.

At a lot of bar games, however, there tend to be players who go all-in before the flop, even with deep stacks, whether they have a premium hand like A♠Q♦, a speculative hand with potential like 6♥5♥, or total hot garbage like J♣2♥. That reduces poker to a game that involves only slightly more skill than roulette, and it only takes one player at the table who does that to screw up the experience for everybody. Let me tell you, at bar poker, there is ALWAYS that one player at the table, and usually there are two or three of them. If the River Rat Rounders take people who do that aside and tell them “stop it or leave,” then I fully endorse their games.

That’s all, folks! Back tomorrow with more news.