Last night my friend Stacey and I went to the 409 S. Main food hall for Farm Fest, the annual fundraiser for the Memphis Farmers Market. There was catering by some of the best restaurants in town, cocktails by Old Dominick, and music by The Three Kings. 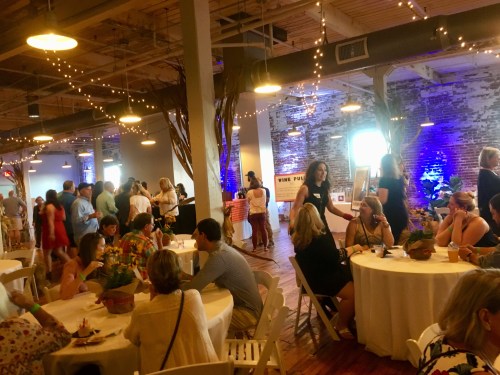 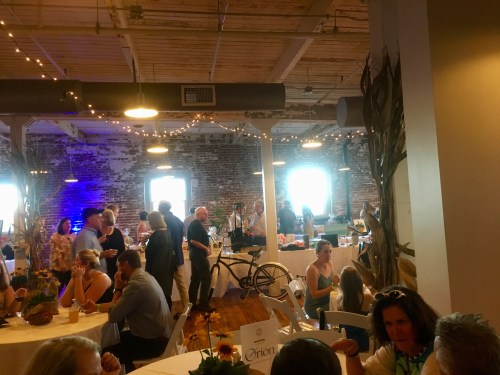 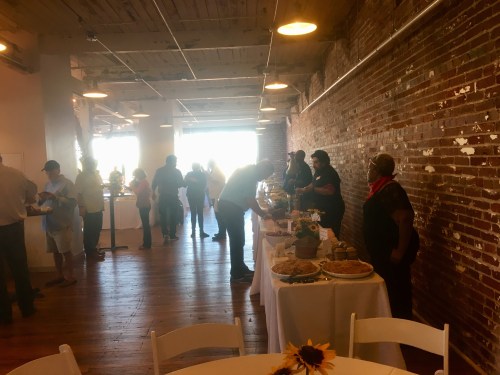 The festival was held in the top-floor private event space of 409 South Main. It was an elegant space, perfect for Farm Fest, and unlike previous venues, it was air conditioned. 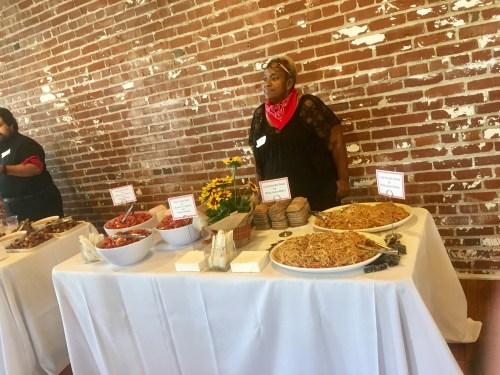 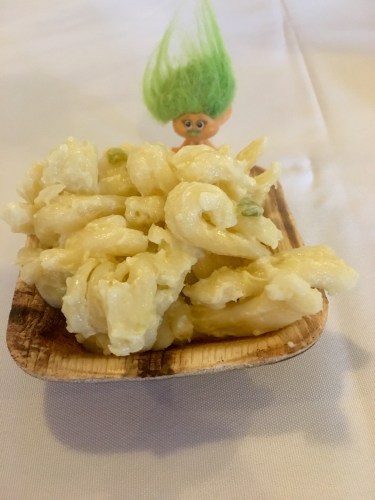 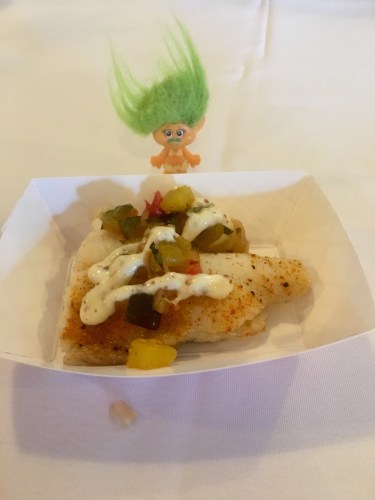 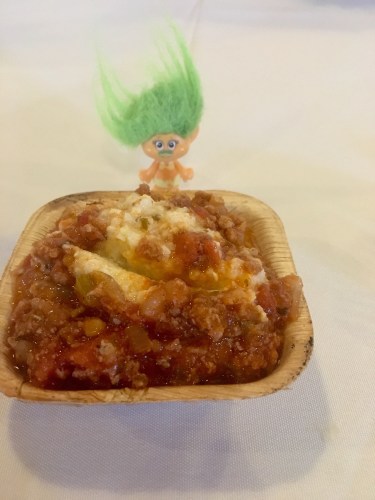 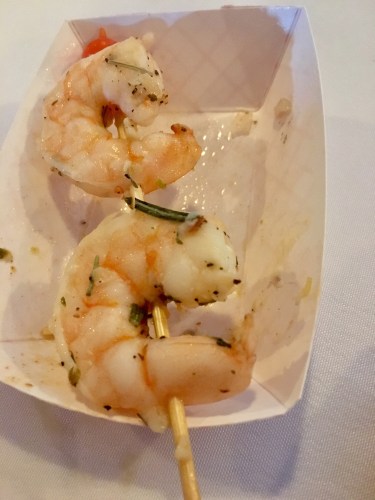 Shrimp skewers. I didn’t catch who provided these. I would imagine probably the seafood vendor whose truck is at the Market most Saturdays. 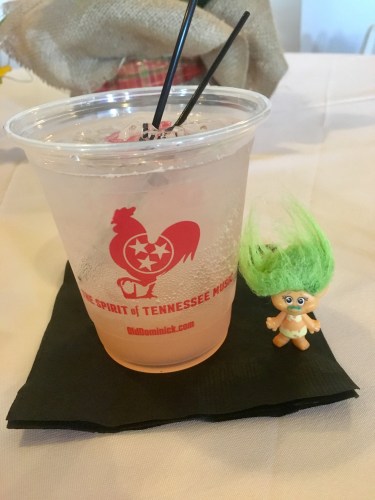 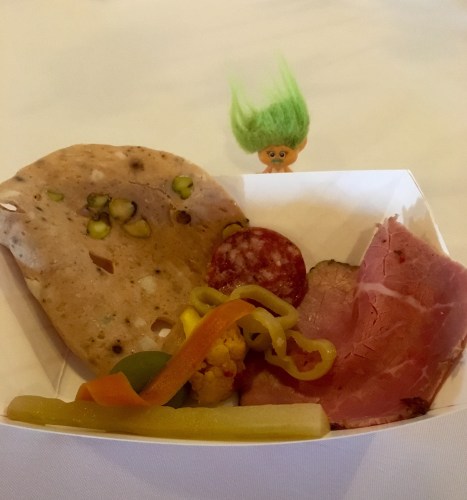 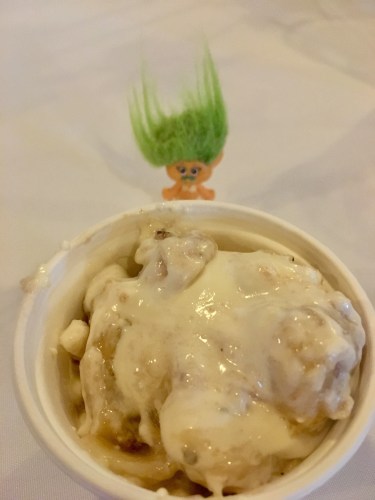 I tried a couple of other dishes as well but forgot to pull out the camera before I wolfed them down. I had biscuits & gravy from Jack Pirtle’s, as well as a delicious chicken fried rice dish by the Majestic Grille. What a fun and tasty way to support one of the best farmers markets in the region. Check them out under the pavilion at Front and G.E. Patterson Saturdays 8 AM-1 PM through October 27.

Okay, let’s get on to the news and then I have a couple of mini-rants. Tug’s over on Mud Island has Oktoberfest specials this week.

McEwen’s has announced they will be closed today and tomorrow, and possibly longer, due to damage from a fire that occurred over the weekend next door at Curry & Jerk.

Bluff City Coffee is reverting to winter hours effective today. They will open at 6:30 AM and close at 5 PM.

The Memphis Redbirds are hiring for several positions including Director of Marketing.

This is not a Downtown thing but still very cool. Pop-up Monster Market in Crosstown Concourse this month.

New information has come in about Phil Trenary’s murder. He was walking home from a Greater Memphis Chamber event at Loflin Yard – walking from Loflin to his home in the Goodwyn building at Second and Madison. So much respect for that. Given all he’s done for Downtown, Trenary has certainly earned the right to have a car service shuttle him around… and yet he chose to walk the streets that he loved to get home. That’s the kind of thing I would do. Well, I say that… and yet I wouldn’t.

My intuition has always told me, “Don’t walk to or from Loflin after dark.” I feel safe walking from the Downtown core to G.E. Patterson, but those last six blocks down Front and Georgia over to Carolina have always worried me a bit to the point that I splurge on a Lyft when I need to get down there.

The thing is, I perceive those last six blocks as a very safe neighborhood, full of residents who watch out for each other. Here’s the thing though… the neighborhood south and southeast of Crump and Fourth is considered among the most dangerous in the city. Criminals from that part of town with access to transportation have a one-minute drive to South End, where they can quickly rob and get out. They know Downtowners tend to see our neighborhoods as walkable so it’s easy to find lone targets up and down the sidewalks.

What’s the solution? More police on the streets? More police cameras? I definitely am not opposed to those ideas at all. But I still don’t think that will solve the problem of criminals driving into the south part of Downtown to quickly rob and get out. Criminals have a different risk/reward mindset than you and I do. To them, it’s worth the risk of several years in prison for the chance to get a debit card and a cell phone and maybe $50 cash.

I think the long-term solution is to expand opportunity to neighborhoods near Downtown like the one near Crump and Fourth. No, I am not talking about gentrifying the area and pushing the residents there out. Rather, think in terms of, what can we do to expand access to things like education, transportation, good jobs, child care, healthy groceries for people in those neighborhoods? What can we do to make people in those neighborhoods not see robbing as their path to the things they want? It just seems to me that by working to improve conditions in the neighborhoods bordering Downtown, we will be improving Downtown itself.

A thing has happened to me twice in the past week. I’ll be sitting at the bar at the Blind Bear when an acquaintance I’ve met once before, recently, comes in. Perhaps they and I had a 10-minute conversation earlier in the week, or maybe I played darts against them.

“Been good, been good, just doin’ my thing. How about you? You good?”

“Yeah, man, real good. Hey Paul, what do you think about getting me a shot?”

I cannot imagine walking up to someone I have only talked to one or two times previously, and asking if they’d like to buy me a drink. What’s up with that? Have other people had this happen to them recently? And the thing is, when this happens, you have to say no. Because if you give in and buy them a drink, then you’ve established a pattern. They’re going to be expecting a drink every time they see you.

Anyway, just had to get that little rant off my chest. That’s it for now. Back tomorrow with more news.