Yesterday I had a good shooter at Bardog Tavern. It was a Peanut Butter Cup, with peanut-infused Jameson whiskey, floated with Kahlua. If you like Reese’s and you like alcohol, and you don’t have a peanut allergy, give one a try.

(I took the shot in the photo by the way)

While there, a beer rep came in and talked with some of the staff at the far end of the bar. About four people said “Paul Ryburn!” all at once, and I learned the rep had asked if there was anyone who was a big fan of PBR. He brought me a beer in a sample glass. “Try this and let me know what you think,” he said.

The beer was PBR Easy, a new, low calorie version of PBR. It tasted like PBR although slightly lighter. The rep said the ABV is 3.8%, a little lower than I’m used to, but these days I drink to socialize, not get drunk. I sure as hell would drink that before I’d drink low-cal swill like Mich Ultra or Miller Lite.

Later in the day I found out Silly Goose and Blind Bear carry PBR Easy. Rico at Bardog apparently promised the rep he’d order some if I liked it.

While at Bardog, Bloom and I posed for a photo in our hoodies. Jameson and PBR just go together. Weezer along with the Pixies will play FedExForum March 22, 2019. Tickets go on sale to the public next Friday, October 19.

The Memphis Wassail comes to Memphis Made Brewing Co. Saturday, December 8. It’s free to join this sing-along of holiday drinking songs, carols, and even some Christmas pop.

Great news for Silly Goose poker players. Starting Monday, their weekly game becomes a River Rat Rounders league game. Muruako will still be around, and the weekly gift card prize structure will remain the same, but there will be opportunities to get into freerolls for real money at affiliated casinos, as well as swag, prizes and Silly Goose card guards. Game starts at 8 with late entries through 9:35. So very excited to finally have a weekly River Rats game at one of my regular spots… Hey Nikki, ice down a few extra PBRs for me… you’re gonna start seeing more of me on Monday nights.

Oh also they will have a 10 PM turbo as well, so those knocked out of the main game early will still have a chance.

Don’t know what to be for Halloween? Ask Siri. 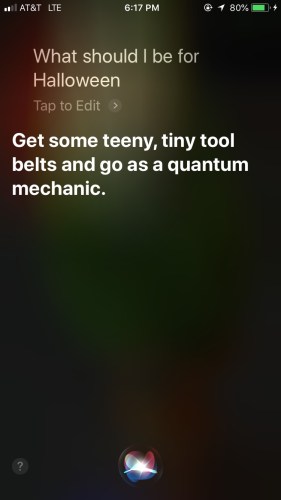 Sunday, November 18 is Bring your dog to bingo day at Loflin Yard. All players with a dog get an extra card. That day is also Buy Paul a Beer for his Birthday if you’re so inclined.

Yesterday as I was crossing Union, I saw my friend Rahul on his first day on the job on a delivery truck. “Put this on the blog!” he said. Knowing how his boo thang Tony loves a man in uniform, I wonder if Rah Rah is going to be uncomfortable sitting on that truck bench seat for his second day on the job today.

Celebrate the Indie Memphis Film Festival a bit early with the Indie Memphis beer release at Crosstown Brewing Co. next Thursday, October 18. Talk with the fest organizers about the films you’re most excited to see. My friends with the New Wing Order food truck will be there.

The Blind Bear started putting their Halloween decorations up this week. For the benefit of my readers who can’t go there for whatever reason, here are a couple of photos. The demon baby is back There will be a 13 mile bike ride starting at Health Sciences Park tomorrow morning at 7. There is a 0.00% chance I will be there.

I can pretty much guarantee you I will be following along with this Saturday’s Memphis Farmers Market theme: Hit the Sauce. You can buy fresh ingredients at the Market to make your own sauces, or you can buy pre-prepared sauces from the creative vendors. Project Breathe will be at the Market all day tomorrow, with recommendations on the right vaccines to beat the flu, as well as information about asthma. Live local music all day. The Market runs for three more Saturdays under the pavilion at Front and G.E. Patterson, 8 AM to 1 PM.

The Farmers Market has the 2018 Farm Fest photo album online. So glad I got to attend this event.

Thaddledoo it for now… back tomorrow with more news.