This year, I had koozies ordered with our BBQ team name and logo on them, hoping they’d be a conversation piece. I bring them out with me every day and use them on my PBR cans. I hoped people would ask about them and then say, “Hey, can I join your BBQ team?” However, in six months (granted, it’s the offseason) that hasn’t happened a whole lot, and has not led to any new members or sponsors.

So yesterday, I took my troll out for her 2nd birthday. For those of you who don’t know, the troll serves as deputy director of public relations for the BBQ team. 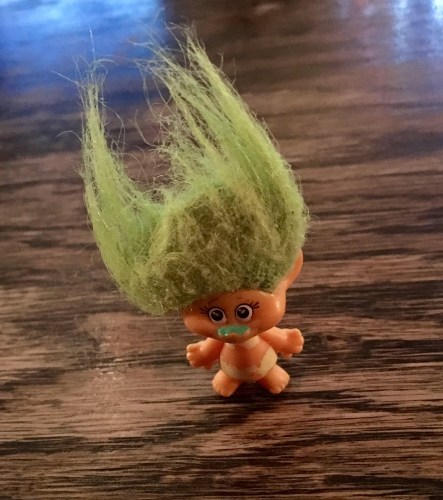 We went to the Blind Bear and then the Silly Goose, with the troll standing on the bar by my beer. And I’ll be damned if she didn’t recruit a new member.

“Can I be on the team next year?” I was asked by the person to my left, a former member of a team that was disbanded after 2015. Officially I don’t have the power to say yes, because we’ve got to give our existing team members the chance to renew and then vet people for remaining spots. This is someone I would vet though, if there’s room.

I just continue to be amazed at what this little troll brings to the table. You know, I have a meeting with team president John D this morning at Bardog, and I am going to recommend she be promoted to Senior Deputy Director of Public Relations. She’s earned it.

I mistakenly thought 99 Cent Soul Food on South Main was closed, because I saw an ad on Facebook that the building was to be auctioned. I have now been told the restaurant has been open as recently as this week.

The Streetdog Foundation event at Carolina Watershed, Sippin’ with Santa Paws where your dog can get a photo with Santa, has been postponed from today until tomorrow due to weather. Silent auction, adoptable pups, and Memphis Made special-release “Pawliday Plaid” beer.

Early opening time for the Grizzlies vs. L.A. Lakers at FedExForum tonight: MVP and Premium 5:00, general admission 5:30. Everyone wants to see LeBron I guess.

The Redbirds are offering free dugout tickets when you spend money in their online store:

Pick up today’s featured item for the littlest Redbirds fan in your life!

You get two free Dugout tickets with a $100 purchase!

Memphis Made Brewing Co. will have four vendors on site Sunday afternoon for Handmade with Memphis Made. Note that they will be closing the taproom early at 5 on Sunday for their annual holiday party.

I just got back from my morning trip to Walgreens where I saw HotHands disposable hand warmers on the bottom shelf beneath the cash register. I read recently that these are a useful and inexpensive gift to give the homeless during these cold winter months. They’re only about 50-60 cents apiece. The hand warmers, I’ve been told, are something the homeless wouldn’t think of buying for themselves, but they sure do appreciate them when given to them.

The annual Liberty Bowl parade has been announced for Beale Street the afternoon of Sunday, December 30. Although this parade is more corporate than the locally-produced parades (St. Pat’s/Christmas), the fun is in mingling with the fans in town for the game – in this case Missouri and Oklahoma State. Both of those schools travel well and it should be a festive day.

Death Cab for Cutie will play an Orpheum show on April 7.

The application period is open for Urban Fellows working as interns for the City of Memphis. These are for college students or recent graduates, and interns work part-time on challenging projects in areas of the city they are interested in. This is a way to get a first-hand look at how city government works and make some valuable connections that can be useful as you advance your career.

I haven’t read the Mueller memos on Cohen and Manafort yet but I am about to. The headlines (except Fox News) are all like “This is bad, bad news for Trump,” so I have an idea what to expect from the memos.

Off to Bardog for that meeting with John D. Back tomorrow with more news.