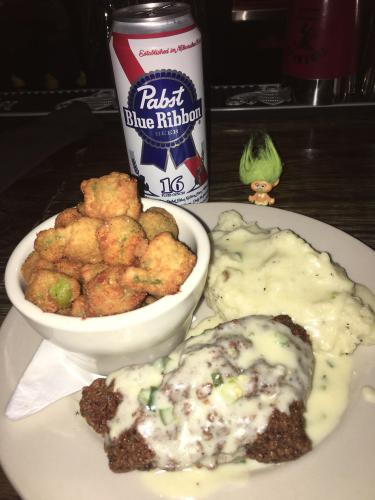 This was so good. The jalapeno cream gravy was not spicy at all, but you could tell the jalapenos added a distinctive flavor. Plus, my troll liked the gravy because jalapenos are the same color as her hair.

I hear they’re doing another lunch special 11 to 2 today, honey habanero chicken with mashed potatoes and orange glazed carrots. I won’t be there for that one but I bet it will be good.

Popular painting class Paint & Get Lit is back at the Silly Goose tonight at 7. Artist David Yancy will lead the class through a painting experience, with happy hour until 8 for class participants.

From the CA: New brewery Grind City Brewing Co. intends to change the game in Uptown. There will be a taproom, a beer garden, and an outdoor stage for festivals. Owner Hopper Seely has dreamed of owning a brewery since high school.

Random thing I learned from Twitter yesterday: Richard Kline, who played neighbor Larry on the TV show Three’s Company, is in the cast of Waitress performing at the Orpheum this week.

Political scientist Michael Nelson said it’s time to bet on MATA. If sports betting were legalized in Tennessee, 30 percent of the proceeds would go to local governments, with half of that money earmarked toward transportation. A great public transportation system is the hallmark of a great American city. Let’s make this happen.

Drunk Grammar happens tonight at Loflin Yard. Compete for prizes to see who has the best grammar.

I got Best Team Name at trivia last night. 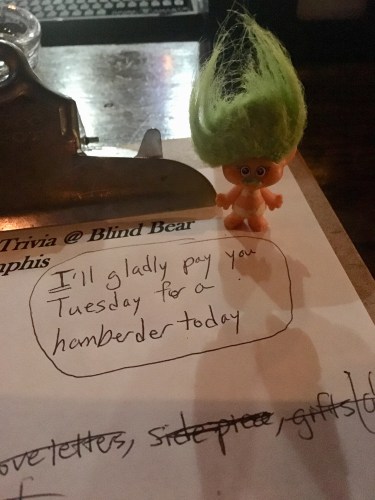 (In best Wimpy voice) “I’ll gladly pay you Tuesday for a hamberder today.” In case you don’t get the reference, Donald Trump tweeted about the 1000 (actually more like 300) “hamberders” he served the members of the national champion Clemson football team.

In other Trump news, he dropped sanctions on Russian oligarch Oleg Deripaska, a cohort of traitor and convicted criminal Paul Manafort. Trump also announced that he wants to eventually withdraw the U.S. from the NATO alliance. Daddy Putin must be mighty pleased with his boy in the White House this week.

That’ll do it for now. Off to get a haircut for the first time in six and a half months. Back tomorrow with more news.