Rizzo’s by Michael Patrick, temporarily closed for repairs due to a tree growing into its north wall, is having a pop-up at Fuel Cafe at 1767 Madison today and tomorrow. Here is the menu. There are different menus for Friday and Saturday (click for a larger size): 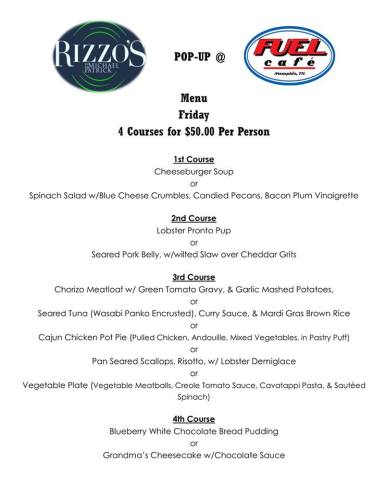 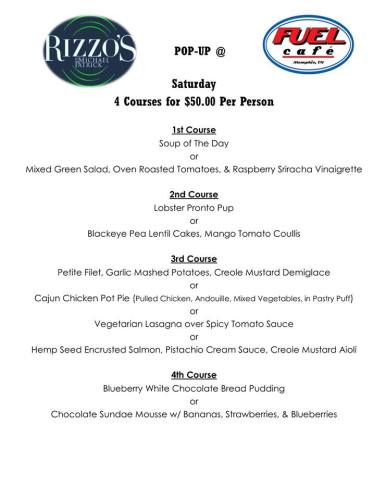 One901 has a post about brunching at Rizzo’s. You won’t be able to do that in the restaurant itself for four weeks, but check out their pop-up opening in 409 S. Main starting January 29.

The Commercial Appeal has a review of the episode of Gordon Ramsay’s 24 Hours to Hell and Back where famous Memphis restaurant Catfish Cabin gets a makeover. They upgraded the menu, cleaned the kitchen, and fired an employee who engaged in some questionable register practices.

However, WREG reports that Catfish Cabin’s appearance on the show begs the question, why weren’t the health violations uncovered by Ramsay cited in recent inspections? Catfish Cabin most recently earned a 92 on its inspection, but the kitchen shown on the show hardly looks like a 92.

When I blogged about the St. Patrick’s Day parade on Beale Street on March 16 yesterday, I forgot to mention one unusual thing about the parade: the start time. Normally parades start at 3 or 4, but this one is at noon. I would guess the start time is to avoid a conflict with the American Athletic Conference tournament down the street at FedExForum.

February 2 has been given an upgrade and is now not just about a stupid rodent that may or may not see its shadow. This year February 2 is ice cream for breakfast day.

You just can’t make this stuff up: Emotional support alligator

Stacey Greenberg of Edible Memphis asks, Are We Tipping Enough? I want to print this post and hand it out to some of the people who come to my favorite happy hour and brunch spots.

Yesterday I went to Bardog for lunch, and the special was out of this world! 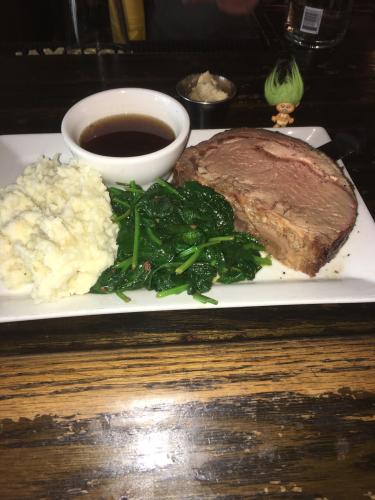 A 10 ounce prime rib, mashed potatoes, and sauteed spinach for $16. That’s a pretty good deal! I requested a cup of horseradish and mixed some in with my mashed potatoes. My troll liked the spinach a lot because it was the same color as her hair.

Santana will be headlining Southaven Springfest this year, on April 27. We had a great time cooking BBQ at that festival last year.

That reminds me – a few people have inquired, what’s going on with the Moody Ques? We’ve been awfully quiet in the BBQ offseason as compared to previous years. Well, I’m happy to report that we’ve been quiet for all the right reasons. We got a 7th place trophy, there was no intra-team drama, and we have a sponsor who has already paid us. It is getting close to time to pay dues, though. We’re planning on having a conference call sometime in the next couple of weeks to figure out the details.

There’s a petition asking the owners of Earnestine & Hazel’s to keep it the way it is. Many people feel that this iconic Memphis establishment should not be renovated or modernized.

It’s Mueller Time! Roger Stone, an adviser to Donald Trump for nearly 40 years, was arrested at his home this morning. He’s been charged with lying to Congress and obstructing justice by intimidating a witness. Stone has strong ties to Julian Assange of Wikileaks. Mueller is getting closer and closer to Trump’s inner circle. I bet Don Jr. is next.