There was a fire at FedExForum yesterday, and I don’t mean the dumpster fire that was the Grizzlies game. A fire broke out around 4 PM in a sauna near a locker room. The Grizzlies had to borrow the Memphis Tigers’ locker room for last night’s game.

You know how some buildings don’t have a 13th floor due to superstition? I’d like to recommend the Grizzlies adopt a new format for their home games – first quarter, second quarter, fourth quarter, fifth quarter.

Interested in joining the Bluff City Mafia, the rowdy but fun-loving group of rabid fans of Memphis’ new pro soccer team, Memphis 901 FC? They will be hosting a One Month Away party at the Brass Door on Saturday, February 9 at 3 PM. This will be a meet and greet where you can get information about how to be a part of the Bluff City Mafia.

Cordelia’s Market is offering 10% off to federal employees affected by the shutdown, for the duration of the shutdown.

Downtown Local will be hosting a Super Bowl party with game day buffet and drink specials.

If the Super Bowl goes to overtime, America gets free wings from Buffalo Wild Wings. An OT finish will result in one free order of snack-sized wings per person February 18 from 4 to 7 PM. As of yesterday the odds of the game going to overtime were +650 (bet 100 to win 650).

More free food news: Next Tuesday, McDonald’s will offer bacon as a free topping to ANY menu item during Bacon Hour from 4 to 5 PM.

Back in November, Gordon Ramsay and his TV trucks were in town. We now know why: He was doing a 24-hour makeover of legendary Memphis restaurant Catfish Cabin out by the airport. The episode aired last night.

Beale Street also announced the date of the St. Patrick’s Day parade for 2019. It will be March 16, the day before St. Pat’s. I will be watching the parade at the King’s Palace Tap Room, of course! I wonder if the South Main crew will be there? I still find it hilarious that they all relocated the day of the Liberty Bowl parade because of that b… never mind.

Great quote I saw on social media yesterday: “People will provoke you until they bring out your ugly side, then play the victim when you go there.”

ALSAC, the fundraising arm of St. Jude, has launched a new digital news platform as a way of reaching younger and diverse audiences.

Ghost River is hosting a Beer & Dessert Pairing with desserts by Primas Bakery and Boutique on Valentine’s Day. Four pastries will be expertly paired with Ghost River beers, and there will be sushi by new Downtown restaurant Fam. Cost is $22 per person.

Update on the status of the New Daisy Theater on Beale Street… the CA reports that it’s not closed for good, but rather taking an operational hiatus.

Necco’s Sweethearts candy hearts are not going to be available for Valentine’s Day for the first time in 153 years. The candy hearts with cute sayings printed on them won’t be around because Necco closed its doors and sold the rights to make the hearts to another company. The new company did not have the time to make the production demands. Uh oh, Rahul, now what are you going to get Tony for Valentine’s Day?

Downtown cigar shop Robusto by Havana Mix is having a game night tonight. 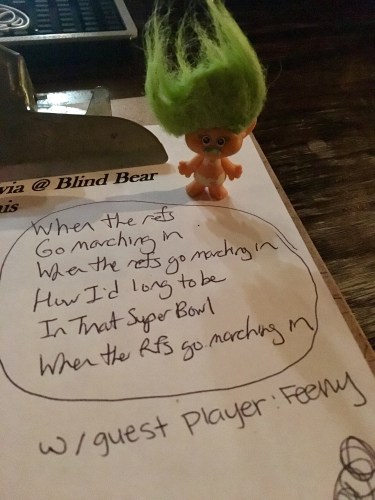 That’ll do it for today. Back tomorrow with more news.