Every day I walk south on the Main Street Mall past an office furnishings store on the ground floor of Barboro Flats. I don’t know if anyone who works there reads this blog, but if they do, I’ve got to ask: How do you work there without going insane?

I mean, the three-and-a-half foot cubicle walls are bad enough. Everybody can see everybody, all day long. Everybody can hear their cubicle neighbors’ conversations whether they want to or not. There is not a smidgen of privacy at any time. But to make it even worse, they have all of Downtown looking into their workspaces all day long. I would feel like an animal on display in a zoo if I worked there!

Call me old-school, but I sure do miss the days when corporate work environments had walls and doors.

I had a really good lunch yesterday. I walked over to Sam’s restaurant at 7 N. Main, next door to Well Worx. Now, Sam’s is mainly known for their burgers and hot dogs, but as I walked up to the door I noticed several pictures of Mediterranean items in the window. They had a  falafel plate! I am a big fan of falafel, so I got the plate to go and brought it back to eat at my computer desk at home. 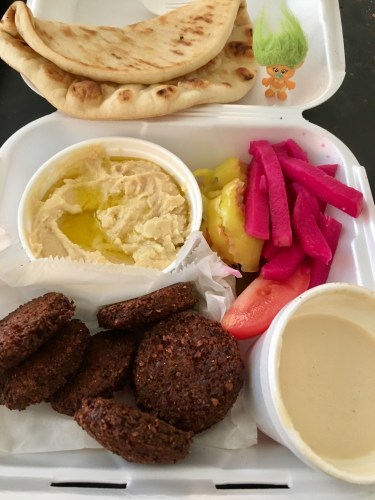 This was as delicious as it looks! There was a side salad too, but I didn’t have room for it in the photo. They have a gyro plate as well and I want to get back in there and try that soon. They have a pretty large menu so you won’t get bored if you eat there regularly. Their pizzas are another item I want to explore.

Memphis is losing someone who has made our city a more interesting place for many years. The CA reports that historian Jimmy Ogle is moving to Knoxville to be closer to his family. Ogle is known for his tours of Downtown, including his famous manhole cover tour. Family comes first and that’s understandable, but he will be missed. Just don’t start rooting for the Vols when they play Memphis, Jimmy.

Memphis in May is only a few days more than 3 months away. Have you ever thought about volunteering for the month-long festival? Here’s your chance:

It takes over 900 volunteers to make each of our events a world-class experience. If you want to learn more about what that looks like or get information on all 17 committees, we invite you to join us on Thursday, February 21 for our Volunteer Expo! pic.twitter.com/Dk46yemkTs

Friends of mine who have volunteered there have told me it’s a lot of fun, and they have come away from the experience with memories and friendships that will last a lifetime.

The Blind Bear’s Saint Valentine’s Day Massacre party returns Friday, February 15. In 1929 Al Capone’s gangsters gunned down rival Bugs Moran’s gang on the north side of Chicago. Come re-live the era of gangsters and flappers at this party. There will be food and drink specials, as well as costume contests. There will be a photographer there and they will be replacing many of the photos on the dining room wall. Starting at 10 PM there will be live music by A.M. Whiskey. The password to get in that night without paying a cover charge will be, “Capone sent me.”

Downtown’s Calvary Episcopal Church has announced its Lenten Preaching Series speakers for 2019. They always have some great names who speak as the church serves plate lunches during Lent. The speaker series begins March 7.

Statistics site FiveThirtyEight has updated its predictions for the Super Bowl. They have the Patriots as a 53%/1 point favorite over the Rams. I know it’s unpopular to root for the Patriots but I’m probably going to anyway. At least they won their conference championship game fair and square.

Lifehacker has information on how to name a cockroach after your ex for Valentine’s Day.

The Daily Memphian reports that good things are happening in Victorian Village on the eastern end of Downtown. Wright Cafe will open at 657 Adams. The cafe will have high-end coffees and teas and eventually desserts, and two bed-and-breakfast suites will be located above it. Also, Mollie Fontaine’s is expanding its patio to activate the space closer to the street.

The new Downtown Baron’s Man Cave will host a grand opening fundraiser on Thursday, February 7 from 6 to 9 PM. The fundraiser will benefit St. Jude and will feature a raffle with prizes from the man cave’s neighbors including The Orpheum, Catherine & Mary’s, and Pontotoc Lounge. You’ll get a chance to check out the new space and 10% of all sales that night will go to St. Jude. Complimentary beverages and bites will be provided.

For those of you whose interest has been piqued by my recent recommendation of the book The Gaslighting Effect by Reva Steenbergen, check out my Twitter account at @paulryburn. I follow the author on Twitter and I retweet memes and quotes from the book that she tweets which I feel are especially relevant. If you’re one of the people who has gone to my friends John D or Misty or Katie Mac or Clay and asked them, “What’s going on with Paul? Why has he seemed like a different person the past few years?”, this book is your answer. It’s an easy read at just over 100 pages, and is very thoroughly researched.

That’s it for now. Trivia night at the Blind Bear is my plan for this evening. Back tomorrow with more news.