Arthur Miller’s The Crucible will be performed on stage at the Halloran Centre for the Performing Arts on Saturday, February 16. This story of a witch hunt, set in 1692 Salem, was inspired by the era of Joseph McCarthy. It’s a story of the bad things that can happen when truth is bent for political means. Sounds relevant for the times we live in today, no?

Cirque de Soleil is in town for 4 days starting today for performances of their show Corteo at FedExForum.

The first crawfish boil of the season is set for Saturday at Max’s Sports Bar. I’ll repeat what I said last year: When Max’s does crawfish boils, the crawfish are better than at any crawfish festival in the city. They are spiced to perfection and corn on the cob and taters are cooked in the boil as well. And yes, Rahul and Tony, sausage is cooked in the boil too. I know how you guys are all about the sausage.

The hours on the Facebook listing are noon to 5 Saturday, but don’t expect to show up at 4:30 and get crawfish. The first boil of the season at Max’s is a huge event and they will sell out early. The cost is $12 for 1 pound or $20 for 2 pounds, and if you’re hungry I recommend going ahead and getting 2 pounds right off the bat because there might not be any left if you try to go back for seconds. Max’s opens at 11 AM and the Tigers basketball game vs. South Florida will be on TV, so the place will fill up quickly. They will have a satellite bar on the patio and extra seating on the patio to accommodate demand. My advice is to be there by noon and let your bartender/server know you want crawfish as soon as they are ready.

The Memphis Flyer’s Beer Bracket competition is coming back soon, and this year they are making it more interesting. This year local breweries will be able to pick which four of their beers they want to compete. Also, if there is a particular beer a brewery does not want to compete against (such as Meddlesome’s 201 Hoplar, last year’s winner), they will be allowed to swap – but they can only swap one time. Voting starts February 13.

The Blind Bear has announced its promotions for Super Bowl Sunday. Starting at 4 PM, they will have $3 aluminum bottles (16 oz.) of Bud, Bud Light, and Mich Ultra. They will have $3 cinnamon whiskey, $4 Diamond Bear 16 oz. draft, $5 Bear Balls (mozzarella balls), $5 beef nachos, $5 beef tacos, $5/7 (cup/bowl) chili or cheeseburger soup, $5 chili cheese fries, and $5 chili cheese dogs. Their Hung Over Like a Bear brunch menu and specials will be available until 6 PM. The Sunday night Texas Hold’em game will happen as usual at 6:30.

Cordelia’s Market is hosting a wine dinner on Thursday, February 21. Five courses, each paired with wine.

Former Memphis Tigers running back Darrell Henderson has been invited to the NFL scouting combine.

LAB Digital Creative, a firm of designers and digital marketers founded by South Main residents Michael Newsome and Alan Hudgins, is having a launch party at Pontotoc Lounge on Wednesday, February 6 from 6 to 8 PM. First 25 people to show up get a round on LAB.

The Blind Bear will hold an ’80s party on Saturday, April 6, with DJ Brad Eiskamp spinning the tunes, a costume contest, photographer, and drink specials.

A bill has been introduced in Congress that would stop members of Congress and the president from getting paid anytime there is a government shutdown.. Betcha Mitch McConnell doesn’t even allow a vote on it.

Memphis Made Brewing Co. is having a board game night featuring Photosythesis tonight at its taproom. 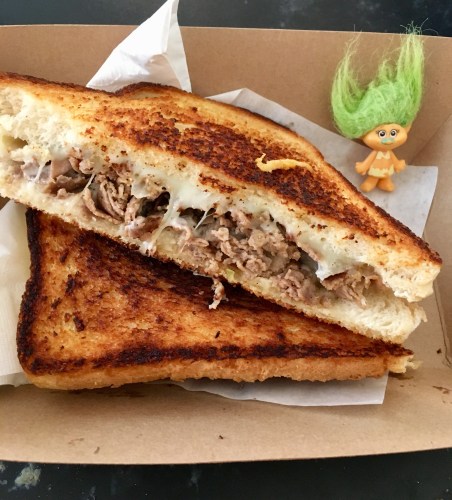 Today’s visit to the Court Square food truck rodeo led me to a Philly cheese steak sandwich from the Say Cheese food truck.

Cordelia’s Market has announced that they will no longer be offering plastic bags as of February 5. Stop by Monday to pick up a free re-usable bag. Read why the folks at Cordelia’s made this decision.

Outlaw Tony Maynard will provide the live music at brunch at Sunrise Memphis this Sunday. He will begin at 10 AM.

The Commercial Appeal talks to chef B.J. Chester-Tamayo of Alcenia’s in this week’s In the Kitchen.

Downtown marketing firm RedRover has a job opening for a Senior Account Manager. The successful candidate will more or less be acting as an outsourced Chief Marketing Officer for client firms.

Long, newsy post today but I’m finally to the end of it. Back tomorrow with more news.