I just read Geoff Calkins’ recap of the Memphis-Orlando AAF game at the Liberty Bowl. Man… that game and the entire league seem like a complete shitshow. The Express have one remaining home game, on April 13, but it’s not clear that the league will even exist by then.

In much better Memphis sports news, the Grizzlies made a quality acquisition this weekend. Dusty Hannahs was a star for the Arkansas Razorbacks, and following college he signed on with G-League affiliate the Memphis Hustle. Hannahs was a star sixth man for the Hustle, averaging 29 points per game in their two playoff games this season. That convinced the Grizzlies to sign Dusty Buckets to a 10-day contract and give him a look. Hannahs wore number 9 for the Hustle, but out of respect for Tony Allen who will one day have that number retired, he will wear number 8 for the Grizzlies.

A new modern luxury cruise ship, the American Harmony, will dock in Memphis. The ship will accommodate up to 190 guests and will feature lounges 40 feet above deck. An economic study found that boat dockings added $36 million to the Memphis economy in 2013, and dockings have risen steadily in the years since. The boat launches in August, but be prepared to pay a pretty penny – staterooms start at $4320 per person.

Perjorie T. Roll wanted me to tell my readers about a great deal she found at the Downtown Walgreens this morning. 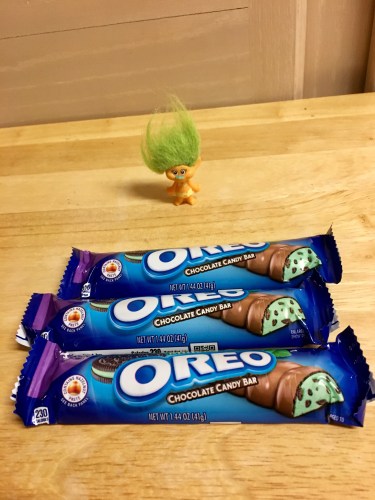 They’re phasing out the mint flavor of the Oreo candy bars and so they have been discounted to 69 cents each from their normal price of $1.29. Mint chocolate chip is my favorite ice cream, and the troll likes the candy bars because the inside is the same color as her hair, so this purchase was a win-win for the Ryburn household.

Ghost River is having a release party Friday, April 5 from 7 to 10 PM for its new Zippin Pippin IPA.

May 4 is Star Wars Day (“May the Fourth Be with You”), but did you know it’s also International Respect for Chickens Day? Be sure to tell a chicken you respect it that day. It’s okay if the chicken is on a plate at Gus’s.

Bardog has a new special (click the photo to see at a higher resolution): 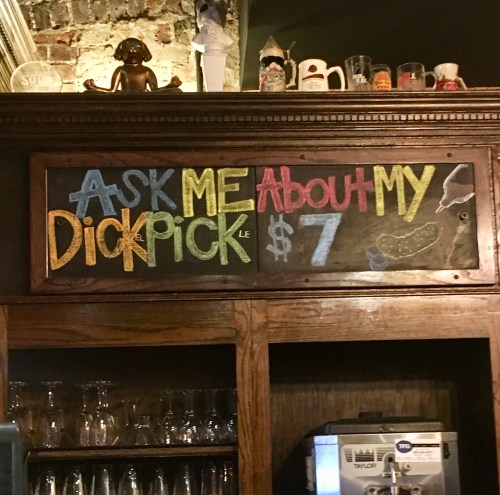 For those who can’t read the fine print, it says, “Ask me about my Dickel Pickle.”

Cheers to the University of Memphis on taking steps to protect students from the rising cost of tuition.

Flic’s Pics will be playing BB King’s on Beale this afternoon 2:30 to 6.

As your #1 source of news and information about The Edge District, it’s my pleasure to inform you of a one-man poetry/prose show entitled The Making of Love at Marshall Arts, 639 Marshall, today at 3 PM.

Oh cool, a former co-worker of mine won a national title Friday in the bridge tournament that’s going on at the Cook Convention Center. Congratulations Richard! The tournament wraps up today.

Something different… this is the first Sunday Fun Day in quite some time when I haven’t gone out at 11 AM. I’m deep into my books on the Python programming language and using Python in data science, and continuing with them seems a better plan than getting out and drinking. I will be out tonight, around 7 probably. Back tomorrow with more news.