Yesterday I decided to play the “I haven’t gone through my wallet in a couple of years, let’s see what’s in there” game, and found a picture of Shawn Danko smiling at me. Shawn and his wife Lana own Kooky Canuck, and his photo appeared on a gift card I had in my wallet. I won it the last time I was in a Blind Bear poker league final table in December 2014. It’s not like I haven’t been to Kooky since then, but I have a bad habit of forgetting what gift cards I have on me.

So last night I decided it was time to splurge. Usually when I go in there I order an app”eh”tizer like the wings or the poutine, or I order a burger. With gift card money to burn, I turned my attention to the entree section of the menu, and there I found prime rib. 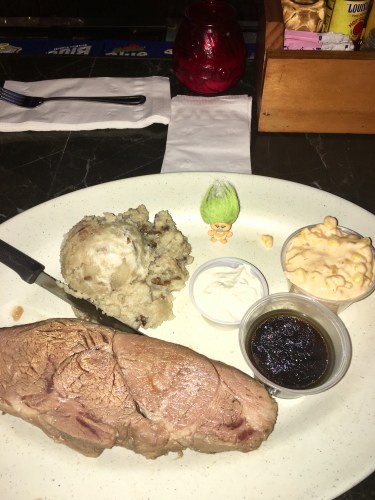 They have a 12 ounce or a 16 ounce, and although I had the money on the gift card, I decided there was no need to be a glutton and ordered the smaller one. It comes with horseradish, au jus, and choice of two sides. I got the blue cheese mashed potatoes and the cheesy corn. What a great dinner!

Before I went to Kooky, I was at Silly Goose happy hour, and bartender Jessica told me, “When you go, you better get the skillet cookie for dessert.” I decided she was right, and ordered the cookie, recently named the best dessert in Tennessee. 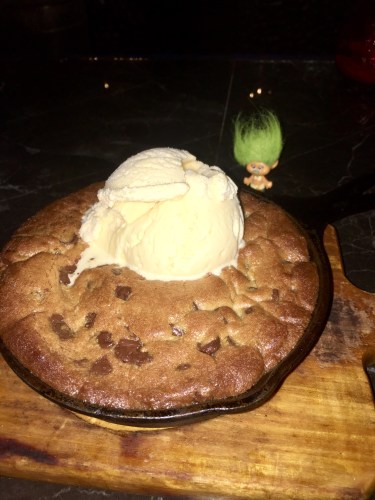 Ooey gooey chocolate goodness a la mode! I was so full by the time I finished most of the cookie that I could barely get out of my seat.

If you’re wondering what film crews were doing on Mud Island this week, they were filming for a new movie called “Wedding at Graceland” that will be released in June.

There’s an all-you-can eat specialty crawfish ticket for tonight’s Redbirds game. The ticket gets you a 6:00-8:00 buffet of crawfish, corn, taters, hot dogs, and 2 non-alcoholic drinks per person.

Chef Jeremiah Langhorne of The Dabney in Washington DC will be the next chef in The Gray Canary’s guest chef series. He will prepare dinner in the Canary’s kitchen on Sunday, May 13. Call 901-249-2932 to make your reservation. It’s part of the Enjoy AM series created by Lexus of Memphis, with proceeds going to the Mid-South Food Bank’s Healthy School Pantry.

Learn to make the Peabody Lobby Bar’s Anniversary John Collins in this week’s Bar Talk in the Daily Memphian.

Kayak and paddleboard rentals are coming to the Memphis Harbor next month.

The trolley stop by the Sheraton will be under construction April 23 through July. Temporarily, passengers can board the trolley at Main and Exchange nearby. The temporary trolley stop will be ADA accessible.

A new Mexican restaurant is planned for Downtown. The owner of Las Comales has purchased the building at 113 Madison.

There’s a raging debate about whether French fries are better with ranch or ketchup. Team Ranch all the way, baby!

It’s Earth Day and Easter weekend at the Memphis Farmers Market tomorrow. Unfortunately Tennessee law prevents vendors from selling the most popular item to consume on 4/20, but they have lettuce, strawberries, radishes, root vegetables, bread, honey, protein, and crafts. Food trucks will be on site. Generation Rx will be there to talk about proper use of medication. The Cossitt Library will have kids’ crafts and reading activities. Live music by Tony Manard, Paul Crum, and Joe Sanders. The Market runs every Saturday under the pavilion at Front and G.E. Patterson, behind Malco Powerhouse.

Entertainment has been announced for the Celebrate Memphis bicentennial celebration in Tom Lee Park on Saturday, May 25. There will be live entertainment on 5 stages, a lighted drone show, an attempt to set a record for the world’s longest picnic table, an air show, a veterans’ group parachute landing, and much more. Gates open at 3 and this is a completely free event. Although there will be food truck vendors, you’re allowed to bring blankets, lawn chairs, and your own food.

The Brass Door will be open at 8 AM on Easter Sunday, for those who want to get out of the house, have a pint, and watch some futbol on TV.

South Main Sushi will have a 1st birthday party on Trolley Night, Friday, April 26. DJ Dre will be spinning and there will be specials and giveaways.