Way to go Grizz! The Daily Memphian’s Chris Herrington reports that selecting any other draftee with the #2 pick than Ja Morant was never under serious consideration. The front office felt he was the kind of high-IQ player that would fit in with the system they are trying to build. Morant will be introduced to Memphis in a 2 PM press conference in the FedExForum lobby.

After getting Morant at 2, the Grizzlies did some wheeling and dealing. They took the #23 pick they acquired in the Mike Conley trade with Utah and swapped it with Oklahoma City’s #21 pick, sending OKC a 2024 second-rounder as a sweetener. Then they selected Gonzaga forward Brandon Clarke at 21. Clarke is a forward who is said to be uptempo and a very good defender. Well done, Grizzlies. Much better draft (and offseason trade season) than I think most fans expected.

Bleacher Report gave the Morant selection an A and the Clarke selection a B+.

Yesterday I walked over to Court Square at 11 and found the New Wing Order food truck. I wanted to try a wing seasoning I had not tried before. That would not be hard to do – they have 17 different sauces on the menu, including their specialty sauces, seasonings, BBQ sauces, and classic wing sauces. Being a big fan of spicy food, I ordered the traditional wings with Nikki’s Hot Seasoning. 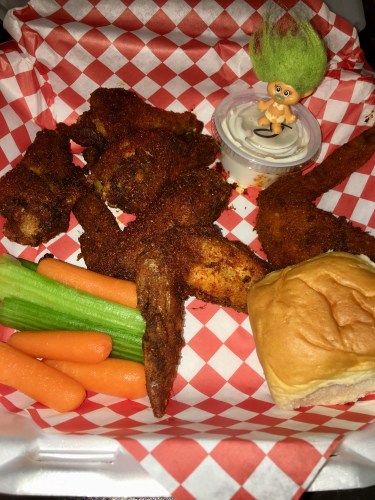 I got an order of six, three flats and three drummies, with blue cheese for dipping, a roll, and carrots and celery. The celery made Perjorie T. Roll happy because she likes foods that are the same color as her hair. As for the wings, they were tasty, but oh man, I forgot just how hot Nikki’s seasoning is. I forgot that the last time I got a bag of Nikki’s Hot potato chips, I needed five glasses of water to get them down. By the second bite into the first wing, my nose was running. So I fell into a cycle: I’d wipe my nose on my napkin, but I’d previously wiped my hands on my napkin, so I got Nikki’s seasoning on my nose, and it ran even more.

And you know what? When I’m eating wings, that’s the way, uh huh, uh huh, I like it. If my mouth isn’t on fire, the wings aren’t hot enough. These more than satisfied. The veggies and blue cheese helped take the edge off the heat. Excellent collaboration between New Wing Order and Nikki’s Hot. I will be back at the food truck the next time it does the Thursday lunchtime food truck rodeo, and hot wing nachos are probably next on my list.

You remember how I told you that this weekend would be a good one to stay indoors, with MemphisWeather.net now predicting a maximum heat index near 103 for Saturday, and WeatherBug predicting a heat index in the 90s at 9 AM? Well, I have a suggestion to help keep you cooled off. Huey’s has announced that they are doing $3.50 drink specials on Saturdays and Sundays, from the time they open all the way to 6 PM. Bloody Marys, mimosas, screwdrivers, champagne, and poinsettias are the offerings. Brunch drinks and air conditioning. Hard to argue with that.

Despite the predicted oppressively hot weather, there is one event this Saturday I recommend you get out for if you have the interest – Yoga in the Park will offer a 108 Salutations for a Cause class in Court Square, taught by Caroline Miles, from 10 until noon. This is a free class, but donations to Streetdog Foundation will be appreciated. In addition to monetary donations, they need

There will be giveaways, and Streetdog Foundation will have adoptable dogs at the class. Best of all, it’s over at noon so you can get some balance and inner peace, meet some pups, and then get back in the air conditioning for the remainder of the day. YOGA!

Hungry Memphis tweeted a photo of one of 3rd & Court diner’s menu offerings:

A co-founder of Facebook thinks it’s time to break up the company. Until this week, I didn’t agree, but now with their new foray into cryptocurrency, I’m coming around to that point of view.

The Memphis Flyer’s Memphis Burger Week returns July 10-16. Some of the city’s best burgers will be only $5.99 that week. Downtown participating restaurants include Arnold’s BBQ, Bardog Tavern, Flying Saucer, and Huey’s.

The July 26 Jake Owen/Hunter Hayes concert at FedExForum has been canceled.

Nick Black plays the Soulin’ on the River concert series on Mud Island tonight. Gates open at 6, music at 7. This is a free show and blankets and lawn chairs are welcome.

Silly Goose is in need of an experienced cocktail server. Apply in person 4-6 PM Wednesday or Thursday.

Crack Open Your Weekend is the theme at the Memphis Farmers Market this Saturday. No, they’re not suggesting you wear low-rise jeans that expose your crack when you bend over. They’re referring to the farm vendors who sell locally-laid eggs. Lots of activities for the kiddos this week. The Children’s Museum of Memphis will be there with 3-D airplanes for kids to color. The American Heart Association will have a crafts corral that sounds like it’s for both kids and adults; kids will have coloring activities, and for the adults there will be recipes and a Fruit and Vegetable Guide with tips that are easy to incorporate. Live music all day long. The market runs every Saturday at the pavilion at Front and G.E. Patterson, behind Malco Powerhouse, from 8 AM to 1 PM.

I had a good time watching the Women’s World Cup at the Brass Door with my neighbor Pete yesterday. The USA won its group and will advance to the knockout stage. The next game is against Spain on Monday at 11 AM.

That’s it. Back tomorrow with more news.