Folks, I have good news… well, sort of. Yesterday I was at the Silly Goose, watching the Women’s World Cup final, when I got a text from my neighbor watching the match down the street at the Flying Saucer. For over a decade the Downtowners have lobbied Saucer management to start carrying the Cadillac of beers, Pabst Blue Ribbon. It took forever but our efforts have finally paid off. My neighbor said they had PBR in 16 ounce cans.

I was excited and started thinking about how I would pencil in the Saucer into my day’s plans. I do miss the place. That used to by my regular hangout more than any other.

I texted my neighbor back. “Can you find out the price?” I was curious what they would charge. Most bars within a block radius of the Saucer are pretty consistent. Blind Bear charges $3 for a 16 ounce can. Silly Goose charges $3, except during happy hour (2-8 Monday-Friday) when it’s $2. Aldo’s Pizza Pies charges $3. I haven’t been in Local in a long time but I’m pretty sure they charge $3. I suspected the Saucer might go a bit higher. “Even if they charge $3,50 or even $3.75 or $4 a can, it’s worth it to get re-acquainted with the place,” I reasoned.

Well, I wasn’t wrong when I guessed they’d go higher on the price than their neighboring bars. I was only wrong guessing they would go “a bit” higher. My neighbor texted me back that the cost of a 16 ounce PBR at the Saucer is an astronomical FIVE DOLLARS a can. Are you kidding me? Does the Saucer’s management think their bar is located in the airport? Or in Manhattan? Or in the FedExForum concourse? Because at those places, I can see myself paying $5 for a PBR can. At the corner of Second and Peabody Place, I can’t. Not when I can walk an additional 150 feet and get the same product for 60% of the cost, 40% if it’s between 2 and 8 on a weekday.

I’ve never seen a bar with such a proclivity for trolling its own customers with the price points it sets. My neighbor asked the reasoning behind the price, and they said all domestics are $5. Five bucks for a Miller Lite 12 ounce bottle? I wish them luck trying to sell them at that price, but they sure won’t be selling one to me.

On to the news. The Trolls LIVE! stage show is coming to the Cannon Center February 22 and 23 of next year. Poppy, Branch and all your favorite trolls from the movie will bring their act to the stage for the first time ever. Tickets start at $15. There is also a VIP ticket that includes a party, a sing-along, a special gift, and the chance for a photo opportunity with the trolls. 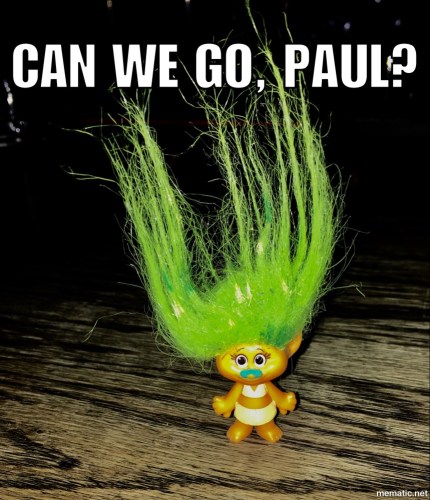 I am so happy for the U.S. Women’s National Team, bringing home the World Cup once again. Snoop Dogg thinks the USWNT should be paid better, noting that they are way better than the “sorry ass men.” I totally agree. The USWNT team members will walk away from the World Cup pocketing $260K per player. If the men had won the World Cup, their bonus would be $1.1 million each.

While watching the Cup, a friend told me that The Usual Suspects are playing BB King’s on August 24. They are a band from Kennett, Missouri who comes to Memphis once a year to play at BB’s. They are notable because Sheryl Crow’s father is a member of the band. I did not realize that Sheryl Crow was from Kennett, in the bootheel of Missouri. I’m not making any promises but I was told that last year when The Usual Suspects appeared on stage, “a special guest” joined them for a couple of songs.

Later that day, that same friend and I were at the Blind Bear, where Tre, the bartender, was serving brunch until 6.

Friend: I want a pancake

Tre: We have waffles

Friend: I want a pancake

Tre: You’re getting a waffle. Same thing. I can step on it.

Here’s some Sunday brunch news that you can use: A friend posted that Curry N Jerk, the Caribbean restaurant on Monroe next to McEwen’s, is doing $15 bottomless mimosas for Sunday brunch.

Just got breaking news from The Daily Memphian that Shelby Farms has named a new restaurant tenant, and the restaurant will be operated by the people who own Flight. The have had tremendous success Downtown and I’m sure they will out east as well.

The Grizzlies have made another move, and this one is a bit surprising: They sent Delon Wright to the Dallas Mavericks on a sign-and-trade deal worth $29 million over 3 years. It’s good in that they got salary off the books without taking any back, but most people thought Wright was going to be backup point guard this coming season, providing some veteran backup for Ja Morant as he adjusts to the NBA. With Wright and Jevon Carter both traded, I’m not sure the Grizzlies have any other point guards besides Morant.

I just got a voice mail saying my Social Security number has been suspended because they noticed some suspicious activity. Are people really stupid enough to believe that?

Coco Gauff’s run at Wimbledon has come to an end. She lost in straight sets to Simona Halep, 6-3, 6-3. Darn it. I was really hoping Gauff would go all the way.

That’s all for now. Back tomorrow with more news.