It’s Wednesday, and that means it’s time for the bi-weekly staff meeting here at paulryburn.com. This is a chance for the staff to share with the group what they have been working on. It’s also an opportunity to look for synergy among team members, to look for ways we can help each other be successful, and to share any problems or issues they have with the projects they are working on.

Senior Deputy Director of Public Relations Perjorie T. Roll, we’ll start with you. What have you been working on since the last meeting? 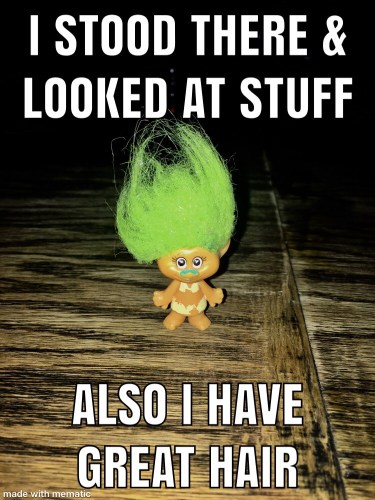 Excellent. Keep up the good work, SRDDIR Roll. That concludes the staff portion of the meeting. Now we’ll move on to announcements from management. There will be a team off-site at the Silly Goose this afternoon, starting around 2. I feel it’s important for us to get out of our office now and then and work in an alternate space where new and different ideas may come to us. Also, there is a team outing to play trivia tonight at the Blind Bear at 7:30. Attendance to the outing is not required, of course, but is highly recommended.

You can bring your dog to the Redbirds game tonight for Woof Wednesday. A special ticket and a special interest get you and your pet in. First pitch tonight is 6:35.

In other Redbirds news, if you love the team, you will want to be there on Friday, August 23, and you will want to get there early. That evening the first 2000 fans through the gate will receive a replica of the 2018 Triple-A Championship rings that the team received earlier this season. The ring features the music note “M” Redbirds logo, the words “National Champions,” the Memphis skyline, and pennants from the years the ‘birds won the Pacific Coast League championship.

Can’t make it on the 23rd, or don’t want to rush to the ballpark to be one of the first 2000? You can get the ring as part of a specialty ticket that also gets you admission to the 2019 Triple-A Championship Game, to be played at AutoZone Park on Tuesday, September 17.

Stanley’s Sweet Street Treats is the food truck today at Cordelia’s Market 5-8 PM. Don’t forget, they’ll be showing Shark Week on the TV there all week long. Someone needs to order the soft shell crab sandwich and post a photo to Memphis Sandwich Clique.

In case you haven’t heard of it, Memphis Sandwich Clique is the best thing to happen to Memphis Facebook in a long, long time. The premise is simple: People post photos of the yummy sandwiches they order from Memphis restaurants – locally-owned restaurants that is, no one wants to see a pic of your Cold Cut Combo from Subway. They also do sandwich meetups, with one planned for the RAWK’n Grub inside Growlers this Sunday at 4. The group is only about a week old and has already exploded in popularity.

Did you know there’s a bar Downtown with a Hookah Night? Jerry Lee Lewis’ Cafe on Beale has one every Wednesday. It’s Service Industry Night too.

Electric Watershed, a Memphis electronic dance music experience, will take place at Carolina Watershed on Saturday, August 10. This event is described as “a music festival in your backyard.”

WWE Smackdown Live was televised from FedExForum last night, and the rumor was true: Jerry Lawler hosted his interview segment The King’s Court, and his guest was retired Hall of Famer Trish Stratus, possibly the most accomplished female wrestler ever to appear in WWE. He asked her if she’d ever thought about coming out of retirement for one last match. Of course, you just can’t have one of these interview segments without an interruption.

Full results from Smackdown Live from Memphis can be found here.

That’s it for today. Time to get ready for the team off-site this afternoon. Back tomorrow with more news.